The Planning Commission was merely an extended office of the Prime Minister. 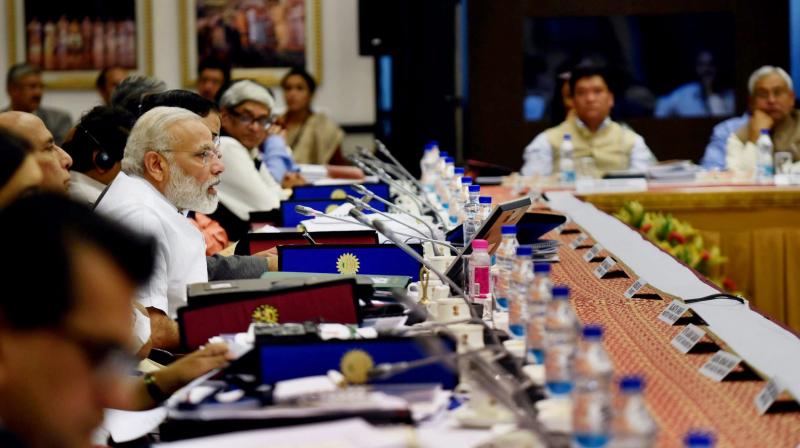 Prime Minister Narendra Modi and the chief ministers of states spent most of Sunday deliberating over the plans and prospects for India in the next 15 years to 2031-32. The third governing council meeting of the Niti Aayog seems to have been an underwhelming affair, judging from the two presentations put up on its website. Why this despondency?

Three years ago, when the dowdy Planning Commission was transformed into a glitzy Niti Aayog, expectations were high that it would be the loci of innovation and cutting-edge analytics in public policy. The Planning Commission was merely an extended office of the Prime Minister. Chief ministers, whilst supposedly integral to the National Development Council (NDC), which the commission serviced, felt like interlopers rather than participating members. The flamboyant J. Jayalalithaa used the NDC forum like a television station — walking in to deliver her speech and then walking out. Others stoically suffered the process, making debating points that no one heard.

Some of that has changed. Mr Modi has done away with the elevated podium of yesteryear for the PM and Union ministers. Now all are seated at the same level around a round table. Another first — the meeting was held at Rashtrapati Bhavan. Symbolic, as our head of state is not the PM, but the President, with whom the Union and state governments have an independent constitutional equation. In deference to the beacon ban, the long line of official cars streaming into the venue may have been without their flashing red lights, thereby letting the tricolour atop Rashtrapati Bhavan take pride of place. On optics, the arrangements were perfect.

The substance, however, seems not to have been as uplifting. Five examples will illustrate.

First, a 15-year vision which is not nuanced enough to reconcile trade-offs lacks credibility. To aim to make India a prosperous economy by 2032 is a pie in the sky. India can, at best, and that too with enormous effort, go from being a lower middle-income country (per capita at current $1,600) to become a middle-income country (per capita current $4,800). A very long shot from being prosperous. The per capita income (at current US dollars) in Latin America and Caribbean today is $8,415, while in East Asia it’s at $9,512. There is no way we can catch up to even these levels by 2032. Consider also that the high growth levels required even to make this jump could negatively impact equality. The international experience amply demonstrates that high levels of growth come with the risk of increasing inequality. There is not a whisper in the vision statement of how we propose to navigate the trade-off between growth and equality — the latter being part of the PM’s vision.

Second, the Niti Aayog’s vision statement is backward looking. It ignores likely technological developments. It aims to make India a highly-educated country by 2032. Should we not be looking, instead, at becoming highly skilled? We are already battling progressive robotisation. By 2032, artificial intelligence would have squeezed jobs further in traditional sectors. New jobs, 10 million a year, which we require and still don’t have, are more likely in highly specialised areas — like space travel, frictionless transportation and psychological counselling — niches which are not easy to robotise, rather than general education which we value today. By 2032, just as plumbers, carpenters, masons and welders would be obsolete, and so would equity traders, bank clerks, low-level lawyers and IT workers. We will still need pure scientists and social scientists and engineers. But in higher education, particularly in pure sciences and applied technology, the problem is employable quality, not the numbers churned out as PhDs.

Third, the vision statement wishes India to become energy abundant. But being energy abundant means energy prices tumbling, fuelling even more per capita consumption of energy. Surely this is incompatible with the other objective of being “environmentally clean”? Are we aiming to provide a car or a motorbike to each household, as the vision proclaims, or to make public transport the most convenient option? Should we not be allocating funds to become energy efficient rather than spending them on acquiring or developing more energy resources?

Fourth, the Niti Aayog aims to make us a globally influential nation? How is one to go about this Dale Carnegie-type revamp? India has thumped the tables of the United Nations for over five decades. And yet, suddenly today, we are more influential globally than ever before because of our large, growing markets, relatively easy access for foreign capital and technology and facilitating internal institutional arrangements. Influence is an outcome of domestic capacity, confidence and conviction. These are the drivers we should be looking at. Best, like Arjun, to aim for the eye of the bird and not get distracted by the clouds floating around.

Lastly, the Niti Aayog was constituted to showcase cooperative federalism and be the entry door for its implementation. But it remains poorly organised for living by this principle. Its staff should be deputed both by the Union government and directly by the state governments, much like multilateral entities operate. It must have a permanent secretary-level board to review and clear documents to be presented to the governing council, and provide a forum for discussion and implicit negotiations between officers from the Union and the states deputed to the Aayog. The governing council should structure meetings to provide for negotiations at the political level to evoke the spirit of cooperation and collaboration. Currently, the council functions more as a receptacle for the views of state governments and offers an opportunity for the Union government to tell states what it is doing, just like the Planning Commission used to do.

The public expects much, much more than old wine in new bottles from Mr Modi. He and the outstanding talent in the Aayog must allocate time for negotiations at multiple levels. There is no other way to make others — particularly the state governments — feel like valued members of the same Team India!