Are we ready for Brit jhadoo?

The only drawback is that England doesn’t have much sunshine, so maybe Panasonic should target the curry-loving market of Britain! 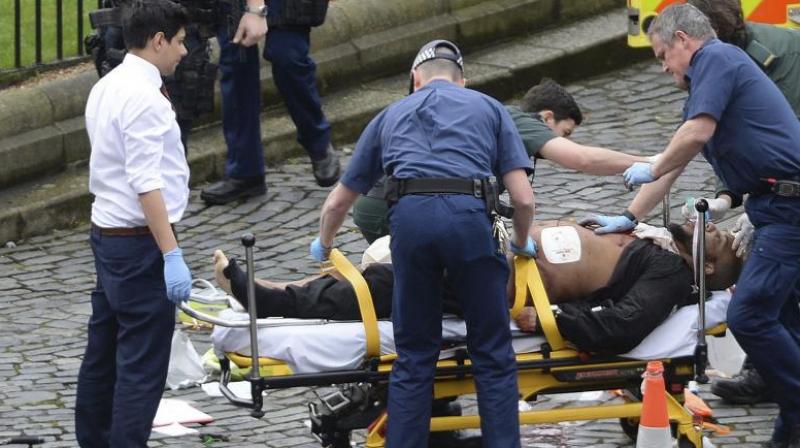 A man is treated by emergency services, as knives lie on the floor, with police looking on at the scene outside the Houses of Parliament London. (Photo: AP)

Jehangir Jhadoowalla, my second cousin thrice removed (twice by the police and once by bailiffs) has ended his unsuccessful attempt to join Arun Jaitley when he toured Britain to inaugurate the India-UK year of culture. Despite persistent emails to Prime Minister Narendra Modi, he received no answer — or as we used to say “apply, apply, and no reply!”

Now cultural exchanges are the “circuses” that go before or hand-in-hand with the real motivation of promoting the “bread” angle. The dances preceded and open the way for trade talks.

JJ’s plea was prompted by the passage to India earlier this year of UK Prime Minister Theresa May, a consequence of the Brexit vote, which causes her to seek trading deals with countries outside Europe.

Her delegation included Sir James Dyson and that simple but significant inclusion is what set our Jehangir Jhadoowalla off on, at first, a protest mission.

You see, JJ and his ancestors built their business empire on sweeping instruments. At first, in the 19th century, their business consisted of tying stiff sticks into bunches and sending them from their farm in Gujarat to Bombay and other cities where these stiff brooms would be used to sweep wet and dry outdoor floors.

JJ’s great-grandfather, a tireless inventor, on a trip to the Bombay of the time, noted that the mosaic floors of rich Parsi houses required a softer instrument than the stiff-stick jhadoo. He claims in his diaries, perhaps boastfully and wrongly, that he then proceeded to invent the soft-feather jhadoo and its jute-string-bundled handle, which would be the ideal instrument to sweep up dust from interior tiled floors.

The first slogan that the company adopted was “The Jadoo of Jhadoo — We’ll Clean You Out”.

By the time JJ and his two boys Pinky and Slinky took over the firm, the Jhadoowalla empire had moved into a hundred varieties of brushes for all surfaces — hard ones, soft ones, big ones for factory floors, small ones for shaving gentlemen’s faces, severe ones for carpets, spiky ones to brush pet dogs and cats, tiny, fine ones for painting with water colours or on canvas and any other brush-related activity.

Now gentle reader, you might ask what this illustrious history has to do with Sir James accompanying Ms May on her diplomatic mission to India. Wonder no more. Sir James is one of Britain’s leading modern inventors. He invented the bag-less vacuum cleaner and set up a factory to make and sell them. Now in any store that sells electrically-operated machines one may find 20 or more models of Dyson vacuum cleaners, some without cords to electrical sockets, operated wirelessly — and other wonders of the modern world. Again, like Jehangir’s jhadoos, Dyson and his engineers made his vacuum cleaners in all sizes and shapes — one that could clean carpets and others that could conveniently vacuum your car.

Sir James was knighted for his ingenuity and, one has to say, for his philanthropy as he donated money to good and charitable works such as buildings for art and design colleges. And as a leading figure in British business he joined Ms May in India, no doubt to be photographed at the Taj and of course to sell vacuum cleaners.

That’s what got JJ’s goat. He had the journalists whom he regularly pays write articles in the international press saying Sir James’ visit raised questions. Here’s an extract from one of the more discerning:

“Sir James Dyson’s sojourn on a trade delegation to India from the UK is the harbinger of the entry of the country into the robotic future of the globalised world. The moot question his visit poses is the replacement of human labour with the machine. How will the millions of sweepers in India who have wielded the brushy broom react to unemployment when the Dyson replaces the sweeping instruments traditionally used in our villages and cities? Not that the vacuum cleaner is an unknown machine in India. The model invented by the late head of the US’ FBI, J. Edgar Hoover, is still in use in many households and Edgar’s surname has indeed replaced ‘vacuum cleaner’ as the common noun for the machine…”

The quote above poses the central question. India over thousands of years has evolved castes of people known as “sweepers”. Is the country ready to evolve or transform these castes to Dysonians?

Or is there going to be mass unemployment when Sir James and Ms May have their way and flood the market with cheap vacuum cleaners made in factories in Oldham? And what about the question of the diversion of electricity into these machines? Will it, as JJ pointed out in his emails, not contribute to global warming?

To tell the truth, I am in two minds about JJ’s case and protests. One can’t stand, Luddite-like, in the path of progress, and there is a case for relieving the tedium of sweeping. Maybe Sir James will make his machines in Gujarat!

Take the case of Panasonic who, I believe have invented a washing machine aimed specifically at the subcontinental market that removes curry stains from clothes. Again I don’t know how popular this will be. My mother taught me that when I get turmeric or curry stains — which are super-resistant to soap and bleach — on any clothing, the way to make them disappear is to soak the stained area in acid and then expose it to strong sunlight — and hey presto! The acid can be white vinegar, citric acid from limes or lemons or even lactic acid from milk. It works. Simple and ecologically sound, it has saved several of my designer outfits.

The only drawback is that England doesn’t have much sunshine, so maybe Panasonic should target the curry-loving market of Britain!