Yemen happens to be captive to the Houthi rebels, who obtain aid from Iran. 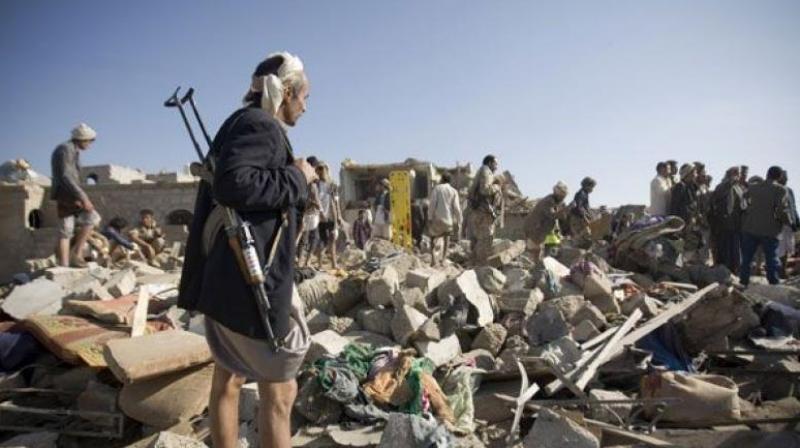 Years ago Rabindranath Tagore, in a quietly reflective moment, said “every child is a sign that God is not yet tired of man”. One wonders what the poet would have said if he heard that a child dies every 10 minutes in Yemen. A silence surrounds Yemen, a void which is unforgivable. The facts are simple. The UN has put it starkly. Yemen raises the prospect of the world’s greatest famine. Seven million people face death and the world still needs a hearing aid. The litany of deaths is repeated every day in the news, a discourse repetitive and redundant. Yet, we do not seem to respond to the catastrophe that is happening as the Arab world’s richest nation, Saudi Arabia, commits genocide on the Arab world’s poorest country, Yemen.

The logic is brutal. Yemen happens to be captive to the Houthi rebels, who obtain aid from Iran. The West, angry with Iran over its nuclear policy, is quite happy to punish an Iranian surrogate as Yemen becomes a site for a proxy war between Saudi Arabia and Iran for the machismo prize among Arab countries. Standing in complicity with the Saudis are the United States and Britain, determined to aid its genocidal accomplice and puppet in the Middle East. Sadly, these forces seem to get away with the idiot logic of their argument with even the United Nations legitimising this blockade. It claims to allow humanitarian assistance, but it is clear from reports that there is a little leakage. Accompanying this act of genocide is the death of conscience. One wonders at the silence of the humanitarian agencies, the muteness of Christian organisations, the silence of our own spiritual leaders from Jaggi Vasudev to Sri Sri Ravi Shankar.

In fact, as one reads the reports, even the anger seems jaded and repetitive. Body counts seem as empty as dull weather reports and one wonders whether the empty face of a Kuwaiti child strikes any resonance in the West. The West at least has eloquent dissenters, like the Pope, but India’s silence is deeply distressing. It is almost as if our appetite for Guinness records lets us watch the world’s biggest famine develop glibly along with the fastest growing epidemic for cholera. We cite statistics and then pretend it is happening on another planet. Whether it be the world’s largest famine or the biggest bowl of khichdi, it does not matter. It is sheer spectacle.

What strikes you first is not the poetics of the tragedy, but the dry bureaucratese, the arid social science language that enfolds the narrative. The storyteller is always the bureaucrat, a UN official, announcing in statistics the birth of a tragedy. It is declared almost like a natural process, a deficit, a lack of such enormity that one feels in awe of it. A famine caught only in numbers is felt to be inadequate today.

The language of humanitarianism and development seems inadequate. They feel like acts of plumbing or, of social engineering.  They lack the sense of caring, of ethical repair where the victim regains his health, his way of life, his dignity by serving as witness to a tragedy. The silence of each victim strikes deep as the photographs seem to be a of a million mutes. Despair and malnutrition have driven them to silence. Yet, one senses the inadequacy of language. The glossaries of security and calorie seem too clinical to capture the lived narrative of suffering. Official language creates a cuticle of indifference which distances you from global despair.

The question is — does one read reports on Yemen with the morning coffee, make a few acerbic comments and move on? Does the scale of the disaster have no response? Is a mere letter to the editor enough or can newspapers, acting as representatives of civil society, start a campaign of concern and caring, offering food, offering to break the cordon? These starving people have rights which go beyond the language of nation states. Mere indifference makes us quiet accomplices to what is going on. One has to raise some statement of hope, create some ritual of reaching out because Yemen is dying of a lack of hope. What international relations needs is not another idiom of security, but a sense of friendship, solidarity and hospitality. How long is India, as a society, as a civilisation, going to be silent? One can understand the indifference of nation states. Their DNA is genocidal, but democracy cannot be listless and indifferent anymore. India needs to coordinate an international campaign to break the blockade. Our nation once battled against apartheid. I think it is time to battle the blockade, raise Yemen to a pitch of ethical concern. Every school needs to ask why Yemen, why Sudan, why Syria, why Sri Lanka? We are all potential migrants.

The question of the refugee, that helpless creature without entitlements, is the problem of the 21st century. It raises poignant issues about the moral nature of citizenship, which is no longer a question of legal certification. Citizenship is no longer parochial, residential or territorial. It is a way of refracting humanity. It is a set of vernaculars seeking a more powerful universalism. Today, every citizen is also a potential refugee. Such is the starkness of brutality of international relations. The refugee is the double in us. It is time we respond to him. This is the message of Mexico, Yemen, the Rohingya, Sri Lanka, Syria and Sudan. The list is endless, so is the challenge.