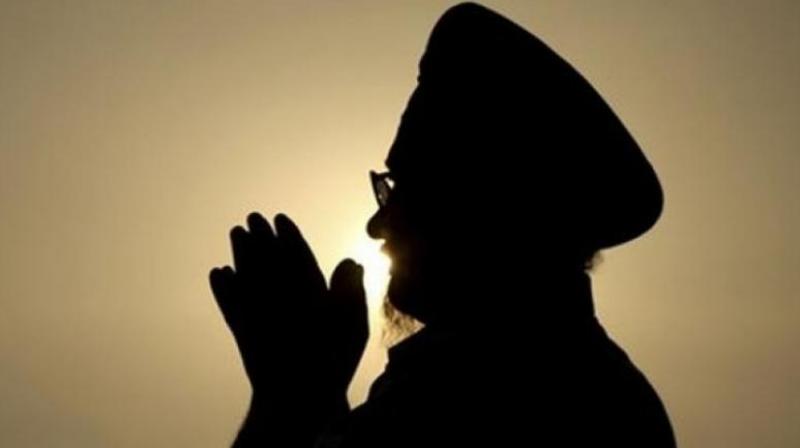 The ninth Guru, also known as “Hind ki Chaddar” (protector of Hindu religion), was born at Amritsar in AD 1621. He was a man of learning, a renouncer (of vices) as well as a warrior.

Wake up, O mind, wake up! Why do you sleep negligently? The body that was born with you will not accompany you when you shall depart... At the death the whole thing will pass off like a dream, so sing the praise of him,” says Guru Tegh Bahadur.

The ninth Guru, also known as “Hind ki Chaddar” (protector of Hindu religion), was born at Amritsar in AD 1621. He was a man of learning, a renouncer (of vices) as well as a warrior. During his childhood, he learnt Gurmukhi, Hindi, Sanskrit and religious philosophy from Bhai Gurdas while Bhai Buddha taught him archery and horsemanship. Guru Tegh Bahadur learnt swordsmanship from his father, Guru Hargobind. The Guru not only learnt about the virtues of a great man but embraced these traits in his life and set an example for all the Sikhs to follow the ideals of humility, duty, forgiveness, nam-simran, to accept the hukam (will) of the almighty and above all, to sacrifice for the right cause.

Guru Tegh Bahadur was named “Tyag Mal” (man of renunciation) by his parents. At the age of 13, he bravely participated in the battle of Kartarpur and left his mark as a distinguished warrior, hence renamed as “Tegh Bahadur” (warrior of swordsmanship). This change of name also symbolises his life which was a right mix of the two. From 1644 to 1664, Guru Tegh Bahadur devoted his life to meditation and introspection. When Guru Harkrishan, the eighth guru, breathed his last and indicated that the next guru was to be found at Bakala (“Guru Bakale”), Guru Tegh Bahadur was found completely absorbed in meditation. The happiness on finding the Guru was immense and the Sikh, Makkhan Shah, shouted from the rooftop of the house, “Guru ladho re, Guru ladho re (I have found the Guru, I have found the Guru).”

Guru Tegh Bahadur’s calm, meditative nature reflects in his Bani, preserved in the Guru Granth Sahib. The world is shown as an illusion and the ultimate aim of life is to become a Gursikh (oriented towards the guru and trying to imbibe the good qualities) and to achieve a union with the supreme being. His entire Bani is about a journey from a worthless life towards an enlightened higher state of life. The Guru writes: “Mother, I have obtained the wealth of the God’s name. My mind is rid of running hither and thither. It has found its rest. Illusion and desire of possession have departed from my body — the pure knowledge of God has dawned.”

The very path of emancipation and sacrifice was truly lived by the Guru when he decided to sacrifice his life to protect the faith and religious freedom of the Kashmiri Pandits who had approached him to seek his advice on  forceful conversion. Guru Tegh Bahadur was of the view that only a sacrifice of a pure holy man could restrain it. His son, Guru Gobind Singh, then only nine year old, had replied: “Who is holier and more worthy than you, Father!” Guru Tegh Bahadur went to Delhi in 1675 and on his refusal to convert, he was executed along with Bhai Dayala and Bhai Mati Das at a place where now stands Gurdwara Sisganj Sahib in Delhi.

Guru Tegh Bahadur’s martyrdom, to defend the religious freedom, was an assertion of human rights and a protest against the conservative rigid political forces to enforce their views on the people. His martyrdom is celebrated every year by the Sikhs all over the world. It is a day of celebration, not of mourning, because to sacrifice one’s life for the dharma (the right way) is the duty and ultimate aim of a Sikh.