Bromance, sans fake sentiments, is in the air

We’ve watched Sholay a sufficient number of times to appreciate the relationship between Veeru and Jai. 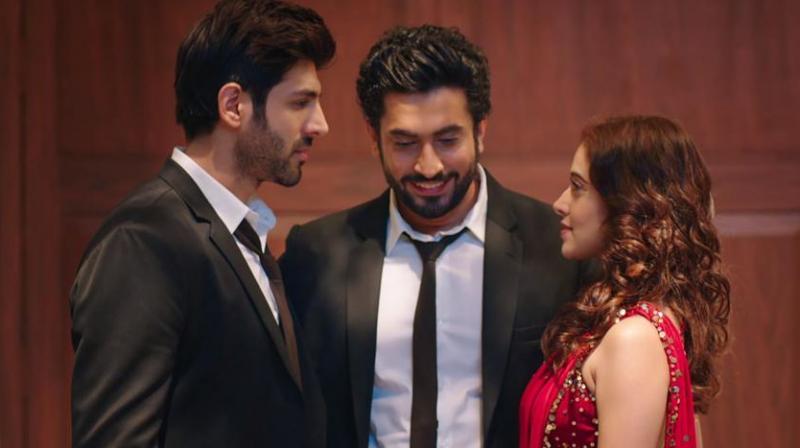 I went to watch the surprise Bollywood hit of the season (Sonu Ke Titu Ki Sweety) without any expectations. All I knew was that a film made on a modest Rs 30-crore budget was slowly, but steadily, inching towards the magic number (Rs 100 crores).

I hadn’t heard of any of the actors, nor was I familiar with the director’s previous movies (Pyar Ka Punchanama). But the tongue-twister of a title of his latest production made me curious —was it a film about two guys falling for the same girl? The girl falling for a third person? Two girls falling for the same guy? Two guys falling for each other? Whatever the combo, it sounded like fun — just what I needed to distract me from the tedium of dealing with political see-saws in Uttar Pradesh and why Mayawati sent a Mercedes to collect Akhilesh Yadav, her main adversary? Or whether Sushma Swaraj needed to apologise to the nation for screwing up on the announcement of the 39 dead Indians in Iraq. Tauba!

In Behenji’s case, why so much emphasis on the make of the car? Would a BMW or an Audi or a Skoda not have performed the same trick that the Merc pulled off? Should she have sent a helicopter?

I mention car brands because they play quite a role in the Sonu-Titu-Sweety love triangle. Since it is billed as yet another take on the “big fat desi wedding”, cars determine the future of the rishta. Family members watch closely to see which fancy car drives up when the girl’s party arrives for the preliminary “dekho” session. I found that such an accurately observed moment! Listening to conversations at airports (my favourite pastime), I am always amused by the amount of time spent on discussing cars and weddings — who has the latest model, was it given as a part of the dowry?

The minute this mad movie started with a toothy young man negotiating the price of jalebis/ laddoos at a wedding banquet, I was hooked.

It was like watching an engaging documentary on the lives of two typical, upwardly mobile Punjabi families, hell-bent on getting ahead in life and being brazen about their ambitions. But the subtext was the real star. It focused on a bromance between Sonu and Titu — childhood friends who share the most incredible emotional bond. Their closeness and intuitive understanding of one another, marks a new high in male intimacy. They are better attuned than most married couples. Their compatibility quotient is enviable.

As for the loyalty factor! Let’s just say, if pushed, they are willing to give up the girl, disproving the boast of the heroine when she states flatly: “If a man has to choose between a buddy and a woman, the woman always wins.” Spoiler: Not in this film!

I discussed the plot with my youngest daughter and she seemed to have totally got the “bromance” angle. My husband and I were less sure. Here was a script in which the girl (Nushrat Bharucha) coldly boasts, “I am not a heroine. I am the villain”, to her fiance’s best friend who suspects her of being a schemer.

Like this little exchange, there were other unusual twists in the story. The hero’s grandfather (wonderfully played by Alok Nath) has a live-in drinking companion who is also a business partner in the family’s roaring mithai business. These two men are inseparable and so in tune, you wonder how the grandma takes their closeness without feeling left out.

Buddy films aren’t new in that sense. We’ve watched Sholay a sufficient number of times to appreciate the relationship between Veeru and Jai. But that was back then. Bromance in this era of fast food and fast f ***s is presented in an entirely refreshing way, sans fake sentimentality.

For a change, it’s Sweety, the take-charge “girl of today” who comes across badly. I have met girls like Sweety — cold, conniving and unapologetic when it comes to manipulating men with one single objective — marriage.

Then comes the big question of why young men from a certain background get married in the first place. As Titu keeps protesting, “Please don’t think I am getting married just for sex.”

It also reveals the layers of repression that our so-called “modern society” is still dealing with. There are references to modern-day dating apps like Tinder and FB which both families scrutinise for clues. Instagram posts of prospective partners are carefully analysed to check a girlfriend’s character with the to-be-mother-in-law chipping in, “Even I am on FB... I know how it works.”

Bromance is a strange creature. Not too many men I know share this level of closeness with another man. Male friendships operate on some other, far more impersonal plane.

The movie ends with the girl getting stood up in the mandap and the men raising a toast to their brand new independent future.

They are joined by the other “couple” — the grandpa and his pal — as all four “boys” laugh over the close miss and celebrate male bonding.

I didn’t find that misogynistic. I thought it was pretty truthful. Now for a proper Fromance — I would love to see Priyanka Chopra and Kangana Ranaut together. That would make for the sexiest screen pairing of the decade. Luv Ranjan — how about a sequel with a sistaah twist?