Cyrus Mistry will not go down without a fight, that is clear. 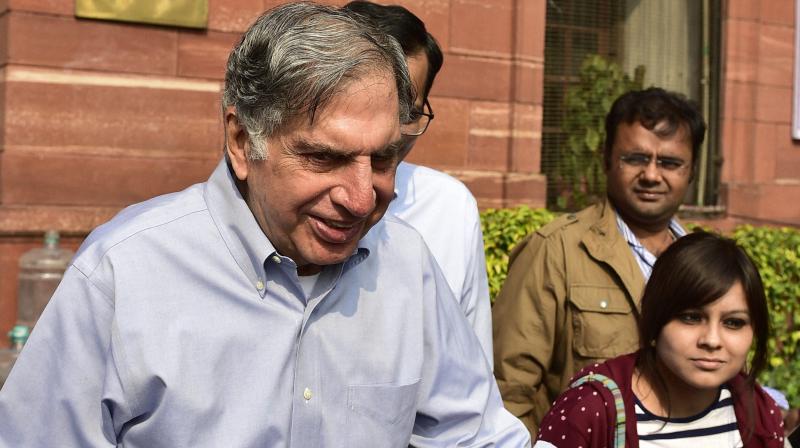 So the shareholding of the Sir Ratan Tata Trust and Sir Dorabji Tata Trust in Tata Sons, settled into charity by the founders of the group, is fully compliant under the Maharashtra Public Trusts Act. The shareholding in Tata Sons held by the trusts is permissible under the I-T Act. There is no misuse of tax exemptions available to charitable trusts by the Tata trusts as tax exemptions have been claimed as per the relevant provisions of the Income-Tax Act 1961 and various judicial precedents supporting the claim. Hence, the trusts have investments in the share capital of Tata Sons. To protect this major asset, the trusts have representation on the board of Tata Sons through professionals of high repute. The trusts act in accordance with the company’s articles. This is important as in March 2013 the articles of association of Tata Sons were amended to allow the removal of the chairman by the board. Which is exactly what transpired on October 24 when the dam burst. The trusts hold investments in permissible modes stipulated by the Income-Tax Act, namely, deposits with scheduled banks (like ICICI, State Bank, etc.), government securities, government bonds (8 per cent GOI bonds), deposits with companies giving long-term benefits like housing finance major (HDFC Ltd). It also needs to be mentioned that public trusts are usually barred from holding shares of commercial businesses by the Maharashtra Public Trusts Act 1973 amendment. They are allowed to invest in banks and postal savings accounts and can otherwise lose tax exemptions.

Power flows from the barrel of the these trusts and Ratan Tata, by virtue of being a Tata himself, protects the interests of the trusts and the Tata family name through the 66 per cent shareholding in Tata Sons. As principal shareholder, in this case through these trusts, he has the ability to fortify himself by building a moat around himself. This is precisely what he has done, shutting out his once “chosen and anointed”, now interloper Cyrus Mistry and his former chief counsel Nusli Wadia, who has defected to the other side in this war. Mr Mistry, by virtue of his 18.4 per cent, finds himself marginalised simply because the hammer of Thor (Ratan Tata) controls 66 per cent in Tata Sons. For a $100 billion-plus transnational conglomerate, the Tatas are mono typical and unique for the enterprise is controlled by public trusts. This is a special and notable business model. A singular distinction has to be made from companies run by private trusts. Trust companies run by banks or other corporate entities have long helped rich families in the West preserve their assets for the long term. A couple of years ago, the Wall Street Journal reported: “Most states (in US) that allow private family trust companies have minimum capital requirements of $500,000. But when a trust serves only the family and its related interests, and is regulated by a state, it doesn’t have to register as an adviser with the Securities and Exchange Commission. This year, Florida became the latest state to allow private family trusts. Others include Nevada, New Hampshire, South Dakota, Tennessee, Texas and Wyoming.”

At the very kernel of the battle between Ratan Tata, representing Tata Sons, a clutch of public charitable trusts engaged in philanthropic work, and Mr Mistry is that the latter’s management style was not delivering adequate returns or dividends to the holding company. If 50 per cent of all group revenues and 90 per cent of all profits, were coming from two entities — TCS and Jaguar Land Rover — it was well within their rights to invoke his removal. Blindsiding Mr Mistry was the induction of two new directors on Tata Sons’ board — top industrialists Ajay Piramal and Venu Srinivasan — as recently as late August. Ratan Tata, as chairman of Tata Trusts, was protecting not just his investments but ensuring that his companies are run efficiently. His contention is that Mr Mistry failed the mandate given to him, while Mr Mistry protests and challenges this vehemently. To understand the ferocity of Ratan Tata’s anger and subsequent assault on Mr Mistry, one had must understand the animal called Tata Trusts, for it is a very different business model as explained earlier. Ratan Tata has ring-fenced himself from the beginning. While he handed over control at reaching the age of 75 in December 2012, his eagle eye was watching over his successor. The fallout has obviously been bitter and both have now taken uncompromising positions. Mr Mistry essaying the role of a whistleblower, an insider, now evicted but deadly dangerous on the outside.

Each outburst from him is taking a toll, each broadside damaging and eroding equity, each fulmination debilitating as a body blow. As I write this, the latest missile makes for incredulous hearing, but is extremely caustic and scathing indictment of the Tata way of business. Mr Mistry now claims Ratan Tata had pitched for selling TCS to IBM, “a near death experience” for the group’s crown jewel.

Mr Mistry’s latest missive says: “Midway during the TCS journey to date, F.C. Kohli was suffering from a cardiac condition. Ratan Tata was then heading Tata Industries’ joint venture with IBM and approached J.R.D. Tata with a proposal from IBM to buy out TCS. J.R.D. Tata refused to discuss the deal because F.C. Kohli was still recovering in hospital. On his return, Mr Kohli assured J.R.D. that TCS had a bright future and the group should not sell the company. J.R.D. Tata turned down the offer, demonstrating true vision. But it was also a near-death experience for TCS at the hands of Mr Ratan Tata.” This vilification and character assassination from both sides is only diluting shareholder value. Every snipe will cost the group, its value systems and branding, and with its credibility rocked. The damage to its reputation is immense.

Mr Mistry will not go down without a fight, that is clear. Equally, Ratan Tata, as a Tata, will physically evict him from each board. Tata Sons claims it has to safeguard its investments for value creation and resource generation for philanthropic activities. Unlike Ratan Tata’s tenure as chairman of Tata Sons, which also saw him heading the Tata Trusts, ensuring consonance and convergence of ideas, Mr Mistry found Ratan Tata ruling the trusts. It also needs to be said that when Mr Mistry took over, a pact was signed between Tata Sons, the holding company, and Tata Trusts clarifying the exact relationship, something Mr Mistry denies now. The interplay between the trusts and Tata Sons has seen a casualty of war: his name is Cyrus Mistry. Mr Tata has the trust of the trusts and he is the Jedi seeking revenge, with his light sabre wreaking havoc.