In Kashmir, the motif is fear

The boy was brilliant at studies and was his school’s cricket star. 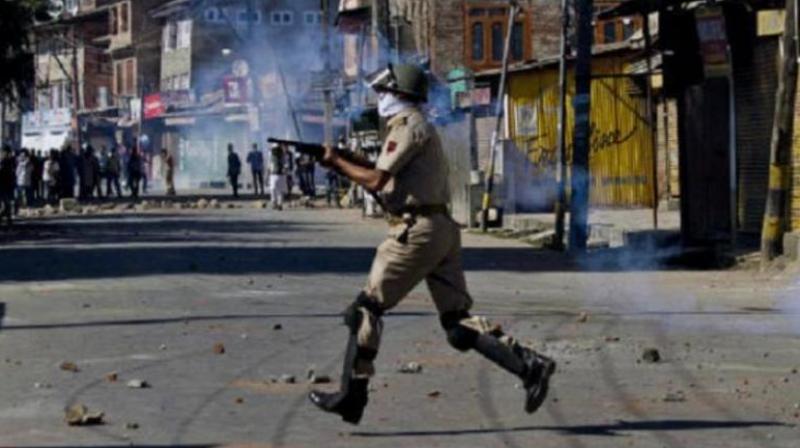 A small group of neighbourhood women was with Asrar's grieving family. Some seemed to be near relations. (Photo: Representational Image/PTI)

Srinagar/Baramulla/Shopian: The gun trigger that took the first life in Kashmir was squeezed on August 6, just one day after constitutional violence had been done to J&K state — and it wasn’t the militants.

In the Ilahi Bagh-Soura area of Srinagar's old city, locally called the “downtown”, Asrar Khan, a 14-year old pupil of the well-regarded Kashmir Harvard School, near his home, was shot in the head from a pellet gun.

The boy was brilliant at studies and was his school’s cricket star. He was bending down to field a ball in a local game in the mohalla park, literally yards from his home, when his skull was pierced by a volley of pellets fired from a column of passing security forces vehicles, the way his parents remembered things — sobbing, but angry and defiant — when I called on them at their home to condole last week. They said tear-gassing had preceded the firing.

For 29 days Asrar fought to live, and then yielded. Images of his brain, seen from the hospital records, are a field of lodged pellets. Yet, a senior police officer, Muneer Khan, declared to the media that the boy had been hit by a flying stone and died. But there had been no stone-pelting. The administration later withdrew the shocking statement. It was too evidently false.

Asrar’s parents said there was no reason for their son to die. The area was quiet. It seemed that just one solider decided to target their son’s bent head for no apparent reason. Pellet guns are supposed to be used when the forces seek to deter an advancing stone-pelting mob from a distance. They are not for use against little boys enjoying a game of cricket when their schools are shut.

A small group of neighbourhood women was with Asrar's grieving family. Some seemed to be near relations. They described an uncommon scene. Batches of helicopters had apparently flown low over their homes, as if on patrol, for a couple of days before the firing incident that claimed young Asrar’s life, suggesting that the administration was adopting techniques to instil fear even before August 5.

“First the helicopters, then firing pellets at a child,” they said. “What is this if not governmental terror?”

Pellet guns have blinded and killed scores of people in the last three years in Kashmir, and their wanton use has been the subject of international censure.

The state does not have to kill. It establishes the reign of fear in other ways. An agitated school teacher told me in Baramulla that he was walking up to his school when a man in uniform patrolling there — they are everywhere, even on village streets — asked to see his ID (in Kashmir, unlike elsewhere in the country, people must carry their identity cards). When this was presented, the soldier pocketed it and said peremptorily, “Collect it from the police station!”

Now, this can be dangerous. Typically, this means unlawful and unrecorded detention, and possibly beatings, for those who dare to go to the police to ask for their confiscated ID back. This can also mean arrest under the dreaded Public Safety Act unless relations or friends are able to mobilise funds to propitiate the petty gods in uniform. For fear of being picked up arbitrarily, young men avoid going to their apple orchards to tend to the fruit, and send their fathers or uncles instead. Many have apparently left the valley to visit friends or relations in Jammu, Delhi, or other cities.

The presence of the armed forces is ubiquitous. For instance, in Shopian district, the Valley’s smallest, there are 226 villages and some 15 camps of the security forces, three of them in the small district town alone. The largest of these, at Balpora, is thought to accommodate around one thousand soldiers. But no terrorist has been caught yet, while torture of civilians is whispered about.