There are those who will argue that if the founders decided to cut the umbilical cord why have they now jumped into the sandpit? 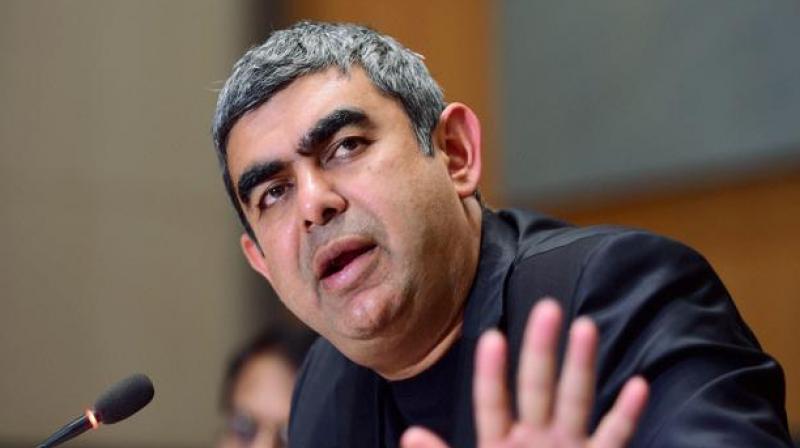 Under the brown fog in a winter dawn, everything is cold, bleak and desolate. The Game of Thrones playing out in Bengaluru at one of India’s largest tech companies — Infosys — is at one level despicable, at another disturbing and extremely destructive from a shareholder point of view. On Monday, Infosys, bellwether and once darling of the bourses, practically fell of the cliff, closing at Rs 870.15, down Rs 53.10 on the NSE. Between Friday and Monday, when the latest episode of the Star Wars firefight had consumed Vishal Sikka, the wheels had truly come off the bus. This is despite the board meeting on Saturday where a gangbusters buyback price of Rs 1,150 per share was announced. Markets were ignoring everything as sellers outnumbered buyers to trigger a run on the stock. Rajiv Bansal’s exorbitant and inappropriate severance package, the distinct and unpleasant odour of hush money having been paid to keep the lid on the $200 million purchase of Israeli firm Panaya had all played out in round one of the gargantuan serial. The battlelines were drawn during the presser itself with R. Seshasayee and Vishal Sikka ensconced in a dark room via VC from Paolo Alto while Ranganath D. Mavinakere, U.B. Pravin Rao and Ravi Venkatesan were sitting in a brightly-lit auditorium in Bengaluru. It was unmistakable, the interplay of darkness pitted against light; the management and the board involved in a bare-fisted brawl with the founders and their proteges baying for each other’s blood. Only this time blood was on the corporate boardroom floor.

In these fast-paced developments, there was another facet of battle that could not be underscored. It had now become personal and plain downright messy and dirty. I could think of several Sun Tzu quotes to go with the state of play — Strategy without tactics is the slowest route to victory. Tactics without strategy is the noise before defeat or the more famous one which would also be apt in this rapidly unfolding scenario — all warfare is based on deception. By Monday afternoon, the drumbeats had started again, N.R. Narayana Murthy groupies were on the job — T.V. Mohandas Pai and V. Balakrishnan — were spewing venom at Mr Sikka. The founders had struck back. With nearly 13 per cent shareholding, the founders have shown that they have great heft to effect changes. In all this hullabaloo, a new paradigm has been revealed which could be by far the most damaging yet. Already corporate governance and best practices, transparency and image have taken a huge beating. Infosys became what it is on the back of its equity and governance standards, its ethicality and transparent dealings. Dust to dust, ashes to ashes. Fundamental tenets of probity, propriety, integrity deeply associated with Infy were in tatters. The clarion call to reconstitute the board, remove the chairman and head of the audit committee has gained currency over the last 24 hours — “off with their heads” — can be heard loud and clear.

What is emerging from N.R. Narayana Murthy’s latest fusillade is a nasty denouement of the company’s functioning under Mr Seshasayee and Mr Sikka. Extracts of Mr Murthy’s letter to advisers is nothing short of dramatic and point to how deep the coverup of the widely dispersed rot is. The most worrisome aspect of the whistleblower accusation is his or her claim that there was an email sent by David Kennedy (general counsel and chief compliance officer, who quit in early January this year) to Mr Sikka that Mr Kennedy could not hide the Bansal agreement from the board and the CFO any longer. It is best that the company scotches this accusation either by denying the existence of such a mail with proof and clearing the names of both Mr Kennedy and Mr Sikka, or by explaining to the shareholders what action was taken against the individuals who hid information from the board and from the new CFO who signs the SOX (Sarbanes-Oxley compliance report) statement. Let us remember that the whistleblower mentions even the company auuditors as being part of this event. Now these disparaging comments open a can of worms. More so, because Mr Seshasayee was at pains during the presser to explain how all whistleblower complaints have been addressed through probes. And there is nothing more to emerge out of it. East is obviously east and west is west, never the twain shall meet. With one side shouting governance deficit and the other screaming trust deficit, both are screaming and kicking.

Now let us come to the very kernel of this firefight — the Panaya deal consummated in 2015. In February this year, an anonymous whistleblower complained that the acquisition was overvalued. It was alleged that the unusually high severance package to former chief financial officer Rajiv Bansal, who refused to sign off on the acquisition, was not disclosed at that time. Questions were raised on high severance package to general legal counsel of Infosys David Kennedy, who purportedly wrote an email to the CEO that he could no longer hide Mr Bansal’s severance package (as bared in his August 14, 2017 missive to his advisers). Mr Murthy’s salvo revolves around the whistleblower’s complaint, which Mr Seshasayee has chosen to dismiss outright. Mr Murthy says, “Several shareholders who have read the whistleblower complaint have told me that it is hard to believe a report produced by a set of lawyers hired by a set of accused, such a report giving a clean chit to the accused, and the accused refusing to disclose why they got a clean chit! ...Even if the company does not want to release any of these reports, what prevents the board from answering my questions, which are purely based on the whistleblower accusations and which will, once and for all, clear the air about the special treatment shown to Mr Rajiv Bansal and Mr David Kennedy?...” The fulminations continue with a more direct and concerted attack on Mr Sikka: “Then there is the issue of the chair of the board telling shareholders at the Infosys AGM in 2016 that Mr Bansal had some special secret competitive data and that is why the company wrote an agreement to pay him Rs 23 crores. There can be no confidentiality issue in releasing the part of the report that talks about the special secretive competitive data with Mr Bansal that the investigation has unearthed.” What were the objections of the former CFO, Mr Rajiv Bansal, regarding the Panaya acquisition as evidenced by the three investigations, emails and transcripts of mobile conversations obtained from mobile carrier companies?

There are those who will argue that if the founders decided to cut the umbilical cord and even distanced themselves from board positions in 2014, why have they now jumped into the sandpit? After all they are minority shareholders, but then these are the guys who built the company from ground zero — relentlessly and rigorously — into a $10 billion global enterprise. So they have a stake in the company where they instilled certain robust value systems which were being destroyed before their eyes. These middle-class values (resonance in Mr Murthy’s own words — “Has the culture of the company changed (since the founders left) to reward people who hide information from the board?”) built a behemoth and there is no harm in protecting your investment, even if as founders you brought in a professional CEO to manage the company. Now you find, like Ratan Tata did with Cyrus Mistry that the handpicked CEO is not up to scratch, so start interfering to oust him. Is that being professional? I guess the answer on both fronts is negative. This double negative sets the tone for a fractious bare-knuckled cage match which, in turn, is imperilling one of India’s finest, once again throwing into stark relief that they are all Idols of the Cave.

The converse view coming from erstwhile long-standing independent director Omar Goswami is that Mr Murthy should walk into the sunset and not mortally wound what he has created. After all, he has drawn first blood.