Worry, we are in dark & dangerous times

Most of the people the Indian army and Pakistan army kills are their own citizens. 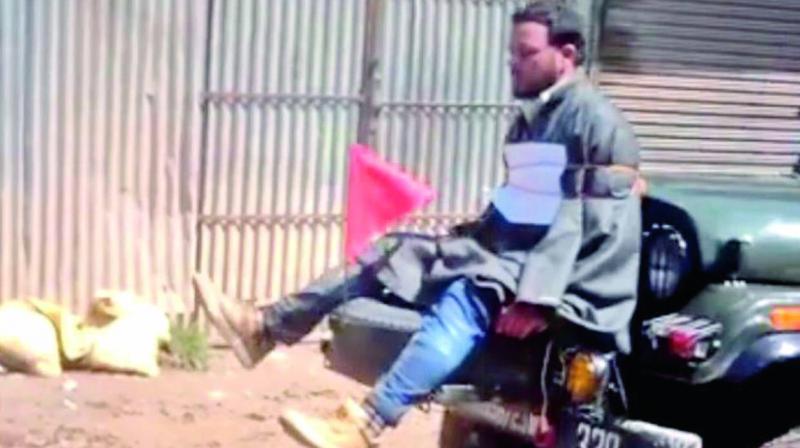 A man, tied to a moving Army jeep, allegedly being used as a human shield against stone-pelters during Srinagar bypolls.

The attorney-general of India, Mukul Rohatgi, who is the government’s chief legal adviser, has asked why there is “so much noise” over soldiers tying a man in Kashmir to the front of a military jeep as a “human shield” against protesters throwing stones at the vehicle.

“The recent report about a stone pelter tied to an Army vehicle, it helped contain stone pelters and saved the poll officials. Why so much noise,” Mr Rohatgi said to a news channel, adding, “every day people are dying. It’s a surcharged atmosphere. The Army is dealing with terrorists not with protesters, so they will have to be dealt with... everyone should look at the Army with pride, they are doing a great job. Sitting in AC rooms you can’t criticise Army. Please put yourself in Army position.”

I want to examine what he is saying from the legal point of view. As citizens we arrive at a contract with our government. We give it a monopoly over violence. This term comes from the German sociologist Max Weber, who studied India and its religions. The monopoly means the state is the only legitimate possessor of the power to physically harm someone.

That is why crimes such as murder, rape and so on are crimes against the state and the state prosecutes them. They cannot be negotiated out of court in a settlement.

The state can demonstrate its willingness to do legal violence through such things as executing citizens for crimes, but it promises to always do so according to the law. All elected officials take an oath of office by which they solemnly swear not to break the constitution. The state, through its agents, having made this promise, then proceeds to use violence where it sees fit.

In our part of the world, this can come frequently through crowd control. All Indians, Bangladeshis and Pakistanis are familiar with the term “lathicharge”. Our governments are convinced that the citizenry is often up to no good and must be controlled by force. It is not unusual for our state to open fire on its citizens.

One of the turning points of the Vietnam war came in 1970 when students at a university in Ohio were fired at by the police and four were killed. This became a landmark event because it shocked Americans that their government would kill its own citizens. The popular music group Crosby, Stills, Nash and Young wrote a song on the event.

In our part of the world, of course, the government shooting dead citizens is a common thing.

Just to give you a sample of what I mean, this is a news report from October 2016: “Four people were left dead and as many as 40 were injured after police opened fire on a protest this morning, according to sources in the Chirudih village near Hazaribagh in Jharkhand.”

“Residents have been protesting the acquisition of land by the NTPC (National Thermal Power Corporation) for their coal mines. The public sector firm had proposed to start mining coal in the Karanpura valley, in the east Singhbhum district of Jharkhand, over an area of 47 square kilometers.”

I do not know how many people reading this will be familiar with the Hazaribagh killings because such things happen often in India. If it had been a terrorist attack on rich urban Indians, readers may have seen an item in the newspaper or on television but the state killing citizens who are protesting against the seizure of their land is not a big issue.

Most of the people the Indian army and Pakistan army kills are their own citizens. In India, the killing happens by the military and paramilitary in the Northeast, in Jammu and Kashmir and in the coal-rich belts populated by adivasis, a word that means original settlers or indigenous people.

To return to Mr Rohatgi, what he is essentially saying is two things: all protesters, including stone throwers, are terrorists. Secondly, because they are terrorists, it is fine for the army to break the law in dealing with them. The army broke the law and the Indian government’s commitments to its own citizens and to the world that it would not conduct itself in a particular way.

This violation, according to the government’s legal adviser, is all right and those Indians who have air conditioners are not permitted to say anything. Presumably he does not use ACs and so is authorised to say whatever he wants. I am amazed this gentleman has been made attorney-general. He has not paid heed to what the Jammu and Kashmir government, of which the BJP is part, and retired generals have said about it. They have said it is an awful thing that will backfire on us. I think they are right.

The Indian state breaks its contract with its citizens regularly and this is not a new thing. What is new here is that the casual bigotry and half-literate arguments of the drawing room are being peddled as the reason this contract is being broken. We are in a dark and dangerous period. Those of us who care for the Indian constitution worry.