There are a couple of significant, and ominous, depending on the point of view, recommendations which have been rejected. 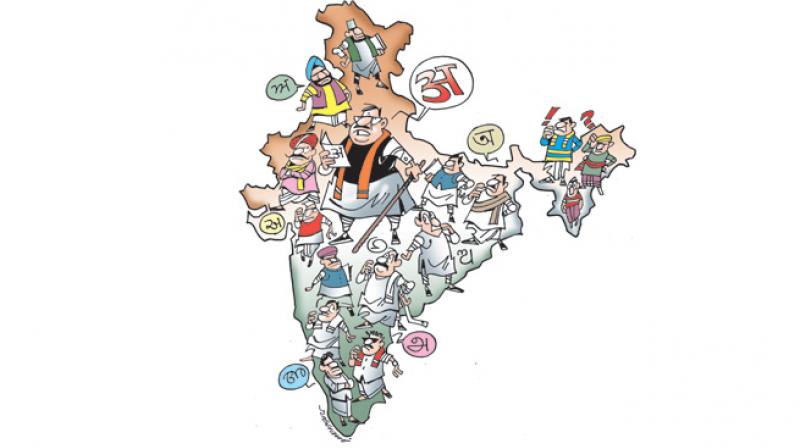 Hindi happens to be the fourth most spoken language in the world, with an estimated 500 million speakers across the globe.

A month after President Pranab Mukherjee extolled the virtues of diversity, he made a surprising announcement that all official speeches should be made in Hindi. We cut through the noise to find out what this really means

The Union ministry of home affairs’ March 31, 2017, notification of the Presidential Order accepting the recommendations of the committee of Parliament on official language is nothing more than a routine affair. That it should be dug out of the bureaucratic pile and given an airing smacks of Hindi politics associated with Hindi-Hindu heartland’s Bharatiya Janata Party (BJP), which is in power at the Centre, and in all of the Hindi-speaking states in north India excepting Bihar and Himachal Pradesh. But the political furore that the news has created needs to be played down. Hindi is not going to swamp the country. There are both political and cultural reasons why it cannot do so. We will talk about them a little later in this piece. First, there is need to pay attention to the facts of the case.

The committee had made 117 recommendations, and the one that got most prominence among others, that the President and others should make their official speeches in Hindi, stands at 105. It is not an injunction but a recommendation couched in officialese: “All dignitaries, including President and all ministers, especially who can read and speak Hindi may be requested to give their speech/statement in Hindi only.” This recommendation has been accepted, but this would not mean that President Pranab Mukherjee in his last two months in office — his term ends in July — will switch to Hindi in haste.

It seems that while the Hindi proponents, who can be inoffensively labelled as Hindi-wallahs, are always looking for ways to push Hindi as far as they can, there are enough sensible people in political parties and in governmental institutions who are deeply aware that this project of pushing Hindi cannot be taken too far because of practical difficulties.

Hindi, despite official backing, has not managed to gear itself up to make itself an eligible language to meet the needs and challenges of governance on the one hand, and of raising itself to the level of easy communication in the fields of science and technology, economics, philosophy and literature. There are not enough translations into Hindi from other India and foreign languages. There are no competent and expansive translation bureaus in Hindi, and this would require funding. Hindi is not updated and not up to the mark to tackle changing society of 21st century.

Hindi is not alone in its inability to measure up to the technological needs. Most Indian languages do not seem to make the grade. If the Hindi advocates, and of course they are not to be clubbed with the zealots, are to cite the examples of Chinese, Korean and Japanese being successful economies managing without English, then they would have to study closely the huge efforts in translating science and technology stuff into their own languages.

Forgetting for the moment that multilingual India is not in the same position as monolingual China, South Korea and Japan, the Hindi or Tamil or Bengali experiment fails in their respective states. The challenges of translating the latest developments in all the fields into one’s own language remain almost unmet.

The best way for Hindi or any other Indian language to beat English is to master English well enough to translate everything that is on offer in English into Hindi so that there is no need for the Hindi-knowing person to make the effort to learn English and that too in such an unsatisfactory manner. This would require an army of Hindi speakers and writers who are polyglots, who know other languages, Indian and foreign, and bring back the intellectual treasures of other languages into their own. That is how English made its way in the world, translating stuff from Greek and Latin, French and German, Sanskrit, Arabic and Persian, Chinese and Japanese. This openness to other languages took English to the top of the table.

The general attitude of the Hindi proponents is one of grouse and resentment against English. This prevents them taking cues from the success of English. It has to be remembered that everyone, including Hindi-speakers, learn English because it offers advantages, opens up opportunities. The day Hindi makes the world accessible, even non-Hindi speakers in India will embrace Hindi. At the moment that it remains a distant goal. The committee on Official Language can make recommendations but they will not succeed.

National language and the Hindi hegemony
Hindi happens to be the fourth most spoken language in the world, with an estimated 500 million speakers across the globe. It has been influenced and enriched by Dravidian, Turkish, Farsi, Arabic, Portugese and English.

A brief history
Hindi is a direct descendent of Sanskrit. It started to emerge as Apabhramsha in the 7th century and by the 10 century became stable. Standard Hindi is based on the Khariboli dialect of the Delhi region.

When did Hindi become the official language of India?
The Constitution, in 1950, declared Hindi in Devanagari script to be the official language of the Union, as well as English. Parliamentary business, according to the Constitution, may be conducted in either Hindi or English. The use of English in parliamentary proceedings was to be phased out at the end of 15 years unless Parliament chose to extend its use, which Parliament did through the Official Languages Act, 1963. However, the states have the liberty and powers to specify their own official language(s) through legislation and, therefore, there are 22 officially recognised languages in India.

Attempts to make Hindi a national language
Plans to set Hindi as a national language began in the making of the Indian Constitution. However, acknowledging that most of the country did not know Hindi, our Constitution-makers decided to promulgate Hindi as an official language on the grounds that it was the single largest spoken language in India. After the 15 year period, the government under PM Lal Bahadhur Shashtri made it mandatory for communication between the Centre and the states to be in Hindi. Further Hindi was taught in schools thus it gave the impression that Hindi was all set to become the national language. This led to a series of conflicts in different regions of India, especially in Tamil Nadu. Sixty-six people died — two of which were members of the DMK.

Another argument came from none other than Mahatma Gandhi. In his book India of My Dreams, he strongly advocates for Hindustani (Hindi in the Devanagari script) which was a resultant of the Hindi and Urdu languages.

Efforts to spread Hindi
Various steps have been taken by the Indian government to implement the use and familiarisation of Hindi extensively. Dakshina Bharat Hindi Prachar Sabha in Chennai was formed in 1918 to spread Hindi in South Indian states. Regional Hindi implementation offices at Bengaluru, Mumbai, Kolkata, Guwahati, Bhopal, Delhi Thiruvananthapuram and Ghaziabad have been established to monitor the implementation of Hindi in Central government offices and PSUs. In 2014, the Union home ministry had ordered all bureaucrats to prioritise Hindi over English on official accounts on social media platforms such as Twitter and Facebook. Another circular announced prize money of `2,000 to two employees who do their official work mostly in Hindi. `1,200 and `600 will be given to the second and third position holders respectively.

Recent controversies
A recent approval by the President to make Hindi compulsory in CBSE schools and KVs has created a furore with most non-Hindi speaking states accusing the Centre of suppressing other native languages.

After BJP’s sweep in recent Uttar Pradesh elections, Protem Speaker Fateh Bahadur administered the oath of office to 319 of the 403 legislators. Thirteen BJP members chose to take oath in Sanskrit, while two SP MLAs from Azamgarh — Nafees Ahmad and Alambadi — chose to take oath in Urdu. However, Bahadur invalidated Ahmad’s oath, and made him retake his oath in Hindi. Under UP Vidhan Sabha rules, a legislator is allowed to take oath of the House in Hindi and Sanskrit, but not in Urdu, the second official language of the state.