What China does not seem to understand is that even if she wins a few IW battles, this will not help her to become a respected state 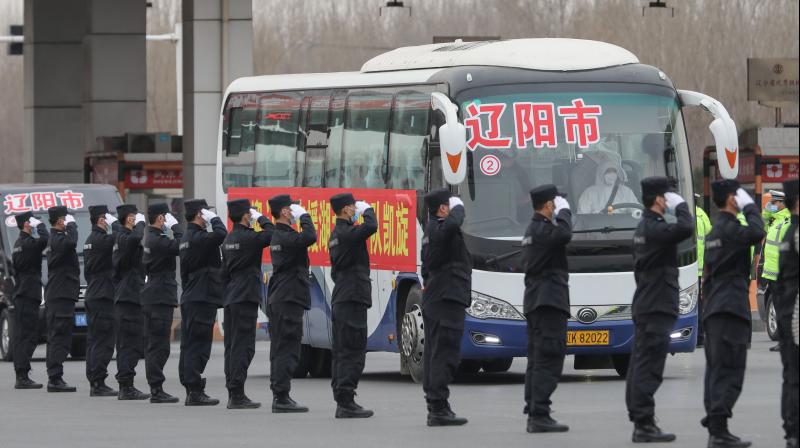 Buses carrying members of a medical assistance team from Shenyang leave Shenyang Taoxian Airport upon their return home after helping with the COVID-19 coronavirus recovery effort in Wuhan, in Shenyang in China's northeastern Liaoning province on March 20, 2020. China on March 19 marked a major milestone in its battle against the coronavirus pandemic as it recorded zero domestic infections for the first time since the outbreak emerged, but a spike in imported cases threatened its progress. (AFP)

As China seems to recover from the dreaded Covid19, Beijing has started a new battle, Information Warfare (IW) against the way the world perceives the Middle Kingdom today.

It is true that after the outbreak of the virus towards the end of December (the virus had probably been around for several weeks already, but the authoritarian regime in Beijing preferred to hide the truth from its own people and the world), the Communist regime discovered that it does not have many friends on the planet.

China has now decided to counterattack. Zhao Lijian, one of China’s sharp shooters, was called upon to serve as spokesman of the Ministry of Foreign Affairs. Zhao, who served earlier as deputy chief of mission in Pakistan, is known for his vitriolic twitter attacks against China’s critics.

Referring to a statement by the director of the US Centres for Disease Control (CDC), Zhao’s latest tweet alleged that the Americans are at the origin of the virus: “CDC was caught on the spot. When did patient zero begin in US? How many people are infected? What are the names of the hospitals? It might be US army who brought the epidemic to Wuhan. Be transparent! Make public your data! US owes us an explanation!”

But the artillery fire does not come from a single sniper. Full-fledged IW began around the time that president Xi Jinping, accompanied by Wang Huning, the propaganda boss in the Politburo’s Standing Committee; Ding Xuexiang, director of the Party’s General Office; and General Zhang Youxia, vice chairman of the Central Military Commission, visited Wuhan.

One of the first shots came from the Chinese Embassy in Australia, which emailed local journalists, accusing them of “politicizing the Covid-19” by saying it originated in China “without any supporting facts.”

Financial Review journalist Michael Smith received an email from the Chinese embassy in Canberra, complaining that he had called the Covid-19, ‘China virus’. Smith asserted that Beijing “has pivoted its propaganda narrative, now insinuating that the virus originated in other countries.”

The symptoms of the Chinese aggressiveness were already seen on February 18, when Hou Yanqi, the Chinese ambassador to Nepal, issued a statement criticising an article published in the Nepali press: “The Kathmandu Post published an article which, with a picture of malicious intention, deliberately smeared the efforts of the Chinese government and people fighting against the new Covid-19 pneumonia and even viciously attacked the political system of China.”

The lady ambassador went a step further. She accused the chief editor of The Kathmandu Post, Anup Kaphle, of being biased: “[he] has always been biased on China-related issues. …[he is] becoming a parrot of some anti-China forces.”

As a result, a group of 17 Nepali editors affiliated with various media houses in Kathmandu issued a statement criticising the embassy for threatening Kaphle: “We would also like to remind the embassy that it breached diplomatic decorum in doing so.”

Hou’s attack on the press was part of a well-orchestrated campaign against any foreign media refusing to follow Beijing’s line.

The Communist Party mouthpiece The Global Times was not left behind. An Op-Ed stated: “Amid the raging Covid-19 epidemic, some Western countries have shown their true colors.” The writer elaborated: “Some Western media outlets have blamed China for the virus' going global and made a big deal out of China's ‘delays’ during the outbreak's initial stage. Now that the novel Covid-19 crisis continues to unfold across the world, it's obvious to see which country's handling has been more efficient and effective.”

The media blitzkrieg brings a new narrative: “The origin of the virus is unknown. It could have come from anywhere in the world. China has been a model in handling the sensitive issue. Beijing can now advise the world how to go about it.”

The strategy’s objective is to force the world to forget how and where the virus started or to find out if the first case originated in a Chinese Lab or elsewhere.

Axios, the analysis website commented: “Beijing's Covid-19 propaganda blitz goes global,” before elaborating: “As China begins to get its Covid-19 outbreak under control, authorities are going on the offensive to rewrite the narrative that the global epidemic is Beijing's fault.”

Axios spoke of China's formidable propaganda apparatus which can obscure the truth and change narratives abroad, just as it can at home.

Bill Bishop, author of the Sinocism newsletter added: “The CCP is masterful at rewriting history, and we’re watching them do it in real time.”

The Editor of Bitter Winter, an Italian website studying China’s Human Rights, recounted: “Some days ago, I opened my email and found a message from a Chinese colleague asking whether I was safe from the ‘Italian virus’. I had never heard the expression ‘Italian virus’ with respect to COVID-19, but then learned that others had received similar messages, and that Japanese were being asked by Chinese friends whether they had been affected by the ‘Japanese virus’.

He quoted from a report in La Croix International citing confidential instructions sent by Beijing to Chinese embassies: “While the virus severely hit Wuhan, where it really originally came from is unknown. We are conducting new studies to locate the virus’ true origin.”

Embassies were asked to ‘raise doubts’ in the public opinion, suggesting that perhaps the virus originally came to China from abroad.

On February 26, Xinhua announced the release of a book, which detailed president Xi Jinping’s “outstanding leadership as a great power leader” defeated the virus. The publication proved to the world the “significant advantages of the Chinese system of leadership and socialism with Chinese characteristics,” and showed how “the centralized and unified leadership of the CCP Central Committee with Comrade Xi Jinping as the core won the Great war against the virus.” It was later withdrawn as the victory had been announced too early.

After reading La Croix International’s report, London-based sinologist Steve Tsang stated: “the CCP always had a monopoly on truth and history in China, and now tries to deny that it originally hid the truth on the virus. CCP officers claim they are right even when it is obvious they are wrong.”

Another Op-Ed in The Global Times argued that all this was a symptom of West’s ideological crisis: “The Western media's ignorance and bias of China's system have never appeared more obvious. For decades, the Western media have been trying to persuade their readers that Chinese people have no freedom or democracy, simply because China doesn't adopt the Western-style electoral system,” while Beijing is pursuing a more substantial and efficient set of freedom “designed to meet the needs of the people who most desire long-term peace, stability and development.”

That would be fine, but why such aggressiveness and often blatant distortion of the facts.

What China does not seem to understand is that even if she wins a few IW battles, this will not help her to become a respected state.