Why I feel sorry for Priyanka…

Priyanka’s legendary charm and people skills are simply not enough to do the trick. 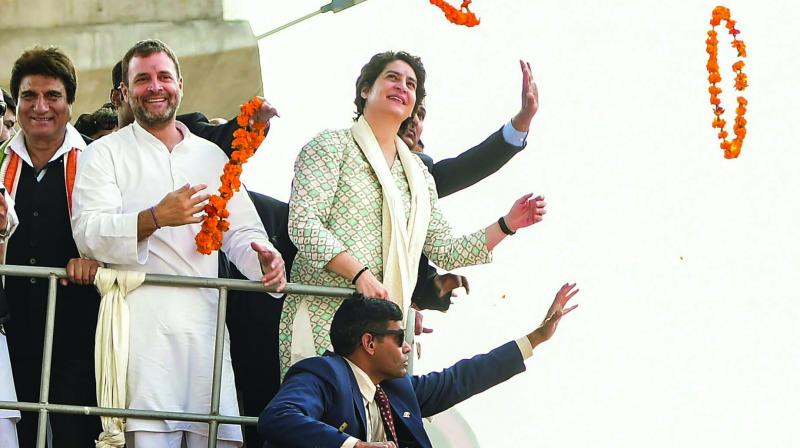 This is really most unfair. I mean… look at the timing! It sucks! Poor girl. There she was minding her own business, rushing to the court each time her hubby and mother-in-law were summoned, looking after her children, attending fashion shows, hobnobbing with the desi royals, holidaying with friends… you know, generally living the life of a privileged, upper crust Dilliwali, when boom! The announcement was made, and she was thrown into the pit. Now there is no going back to being the tall, striking private citizen, helping out her brother and mother when required — she is now fully in it! All the way. Up to her eyeballs and over. Priyanka Gandhi has made it official — she has joined the family business. And there is no out. It’s the California Hotel story, and Priyanka is here to stay, come hell or high water. But hello! How grand an idea is it? Why was she inducted this late into the game? If that was the gameplan from the word go, could this not have happened earlier — say, five years ago? Clearly citizens will never know. And Sonia’s lips are sealed — as always. One small step for Priyanka has turned into one big leap for Congresswallas. It is as if a Fairy Godmother has arrived to wave a magic wand and set everything right. Overnight. All other strategies have taken a backseat now that Priyanka is in.

Analysts wonder what the real story behind this dramatic move could be?  Of late, Rahul was doing a pretty decent job on his own. People had started to pay attention to what he was saying — finally. He had found his stride and grown into the role thrust on him by Mummyji and her coterie. Bringing his sister into the narrative might distract voters and skittle minds just as voters were getting accustomed to one main star from the family — Rahul. It’s now a case of “buy one — get one free”. But that’s not how it works in politics. Since the time of her induction, Priyanka has not really done very much to create the big bang that was expected from her. Given her megawatt charisma of old, one expected her presence to attract huge numbers. So far, she has played second fiddle to her bhaiyya, and appeared in a “supporting” role, not a “parallel” one, to use a Bollywood analogy. This is indeed mysterious. Unless Mrs G is saving up the best for last. But what on earth could that “dhamaka” be? Pitting her against Narendra Modi at this late stage makes zero sense. And making her Rahul’s star campaigner has no media value —– she has been playing that role for eons, albeit without the designation she now possesses, along with her own daftar.

The thing is, India has changed, and how. Priyanka’s legendary charm and people skills are simply not enough to do the trick. Voters are looking for something more. Much more. What can Priyanka possibly promise them? And no matter what she promises, is she in a position to deliver? No chance. It’s one thing to nurture a family “estate” like Amethi, and get touchy-feely with villagers. But Amethi itself has changed. With nothing much to show for the Gandhi connection over decades, the people of Amethi are disappointed and jaded. If a brash new someone shows up and — most importantly — shows them the money, they will switch loyalties in a flash. Today’s voter asks just one question: “What’s in it for me?” Nobody cares about party lines or rivalries of yore. Amethi has proven its fidelity to the family far too many times… and not been sufficiently rewarded. The people there are no longer mesmerised by Missi Baba turning up to hug an old crone or cuddle a newborn. And here, we are only discussing Amethi. At the national level, Priyanka has little impact or recall value. Young voters may or may not know who exactly she is. Sounds crazy and implausible, but the youth today barely know who Indira Gandhi was. Most think she is Mahatma Gandhi’s daughter. Some are not aware she has been dead for decades. In such a dismal scenario, Priyanka will have to introduce herself to voters more aggressively and spell out what she stands for and what she can deliver. As of now, everybody is clueless! And the chattering classes can only go on and on about her fluency in Hindi, her exquisite handloom sarees , her deep dimples and her abundant charm. This is pretty terrific stuff. But is it enough to swing votes?

After Pulwama, citizens are holding their breaths to see what our Prime Minister will do next. (He has said he is going to give the Army a “free hand”.) A lot of drama is expected, as India plans a fitting response. If NaMo pulls off a strategic coup that shows him as a tough leader who will not take the attacks lying down, then one can safely hand over the 2019 election victory to him. Where does that leave Priyanka? Gamely grinning next to her brother and faking a confidence she cannot possibly feel. Unless all of us are missing something. It is hard to believe Sonia would have inducted her beloved daughter into the fray only to see her flop. Impossible. I am expecting a big announcement soon.  It is that — or a slow fadeout in future. Priyanka is being played. I’m sure she knows it too. Trump cards and masterstrokes cannot be wasted. Let us hope Priyanka is not. There is far too much at stake, and Sonia knows it.