The Narendra Modi government must know that this is a great game that Delhi must play to win. 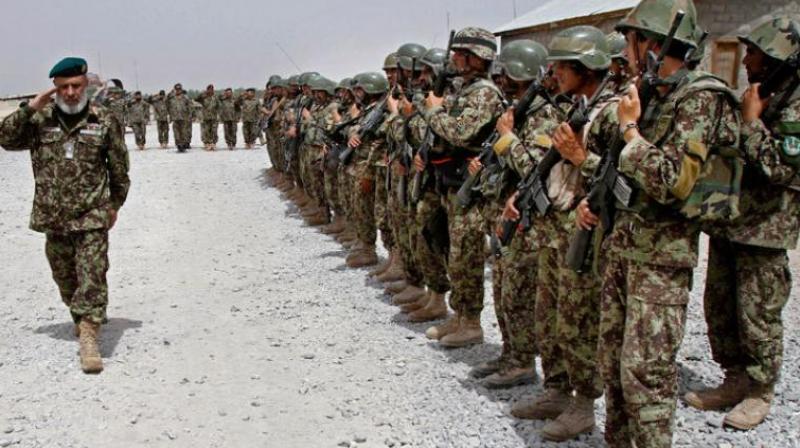 With the US Congress passing a $700 billion defence budget for 2018 that makes some $350 million available to Pakistan, contingent on whether it takes demonstrable steps towards curbing the Haqqani Network which two US defence secretaries have attacked as the “terror arm of the ISI”, the Pakistan military-ISI complex’s plan to replicate its 1996 soft coup in Kabul could well be in shambles.

Coupled as it is with the inclusion of the line that the United States and India should work together to promote stability in the region — particularly in Afghanistan — and recognise India’s status as a “major defence partner”, the Pakistan stratagem of keeping India out of Afghanistan may go belly up.

The US looked the other way in 1996, when after a protracted 10-year civil war, the Taliban — born in Pakistan — took control of Kabul. The Mujahideen had retreated. The Taliban militia, dressed in black, armed with Kalashnikovs, patrolled the streets, terrorising men who didn’t sport full-grown beards, driving women who weren’t clad in the mandatory blue burqa indoors. Girls were stopped from going to school. Thieves and adulterers, including women, were publicly mutilated and executed at the Kabul stadium. In a city without television, music, kite-flying or the cinema, this was the only entertainment.

It was also the moment of Pakistan’s supreme triumph — installing a Pakistan-friendly Taliban government in Kabul; the Taliban, dependent, then as now, on Rawalpindi for arms, and the Gulf for funds, purportedly for its madrasas.

It took the horror of 9/11 for the United States to act, raining retribution on the country that had given protection to “honoured guest” Osama bin Laden. The Taliban simply melted back across the badlands into Quetta, where the capital of Balochistan functions to this day as the seat of the Quetta Shura, the Taliban government-in-exile. Pakistan not only saw its “strategic depth” disappear, in a complete reversal, the Mujahideen, who had fought against the Taliban, and who were close to New Delhi, gained ascendance in a country that the Pakistan Army had grown to consider as its sphere of influence.

Kabul revelled in its new-found freedom. Women burnt their burqas. A girls’ school named after the legendary Malala was reopened by the man who would soon become the new President, Hamid Karzai. The multi-ethnic strands of a city that sits on the crossroads of Asia began to re-emerge. In a largely Hindu-Sikh suburb, where the Taliban had marked out each “kaffir” house, the Hindus gathered at the remnants of a Shiva shrine, digging until they recovered and re-installed the Shiva lingam that they had buried to keep it safe from the Taliban. If that wasn’t moving enough, at the ministry of information and culture that had been boarded up, a trove of Afghan musicians and artistes began tearing down a wall. Behind it were the dozens of musical instruments they had hidden from Pakistan’s ISI. The joy on their faces, the relief that they had seen the back of the Taliban, was so palpable. “The Pakistan ISI operatives told us that they would deface every bit of Afghan culture, destroy all our instruments, our movies, books, music, that there would only be Pakistani culture,” one of the oudh players told me.

Sixteen years later, the Taliban are back. Sixteen years that the US and other foreign forces have simply squandered. The police force of a few hundred thousand, largely uneducated, is poorly-trained, ill-equipped and hopelessly stretched. The Afghan National Army, propped up by the International Security Assistance Forces (ISAF), is an infantry without either the armour or the air force that it needs to keep the Taliban at bay. It’s easy to see why New Delhi’s training of the police and supply of attack helicopters, which would give the security agencies the necessary teeth to counter the rising Taliban, has Pakistan worried.

American troops, up against a wily enemy, adept at finding refuge behind the porous Durand Line, prompted the US’ initial attempt at an exit strategy — buy peace with the Taliban. Not that Washington backed President Hamid Karzai when he reached out to the Taliban, even though both Mr Karzai and his successor President Ashraf Ghani saw Pakistan’s ploy in reintroducing the Taliban into the political narrative for what it was — installing their proxy in Kabul.

Mr Karzai’s peace overture didn’t go far. In September 2011, his mentor and former President Burhanuddin Rabbani was blown up by a suicide bomber, pretending to be a member of the peace delegation. Talks with the so-called Doha Group came undone in 2013, nixed further when Mullah Omar’s death, that Pakistan had kept under wraps, became public. Despite US defence secretary Jim Mattis reinforcing his predecessor Ashton Carter’s disquiet over the funding and arming by Pakistan of the Sirajuddin Haqqani group, the US acquiesced to the return of Gulbuddin Hekmatyar, albeit a former CIA favourite, as a possible successor to President Ashraf Ghani.

Clearly, this is the opening sequence in the run-up to the 2018 parliamentary elections and 2019 presidential polls. The attempt on the life of Tajik strongman Ata Mohammed last week, laid at Hekmatyar’s door, is a piece with Pakistan’s campaign to eliminate any rivals. The Balkh governor is now part of the Ankara Triangle, the alliance forged by the feared Uzbek, Abdul Rashid Dostum, and his Jambish-e-Milli, Hazara leader Mohammed Mohaqiq’s Hizb-e-Wahdat and Salahuddin Rabbani’s Jamiat-e-Islami. This was followed in July with another grouping, largely Pashtun, said to be Mr Karzai’s political reinvention through a Loya Jirga that he hopes to convene. Afghan Chief Executive Abdullah Abdullah is also in the United States jockeying for a role.

The Taliban may have no leader, no face to lead this charge. Mullah Barader is a drug-addled Pakistani captive. But with the Taliban revival a military reality, Washington could now be playing out a second exit strategy — pulling “major defence partner” New Delhi to take on the training and arming of the 350,000-strong Afghan National Army, as Washington’s possible proxy to counter the China-Pakistan nexus. Given the high stakes in a country which continues to be fought over much like the national sport buzkashi, the Narendra Modi government must know that this is a great game that Delhi must play to win. On its own terms.