Bhuvaneshwari is goddess/ruler of the created world where all beings exist. 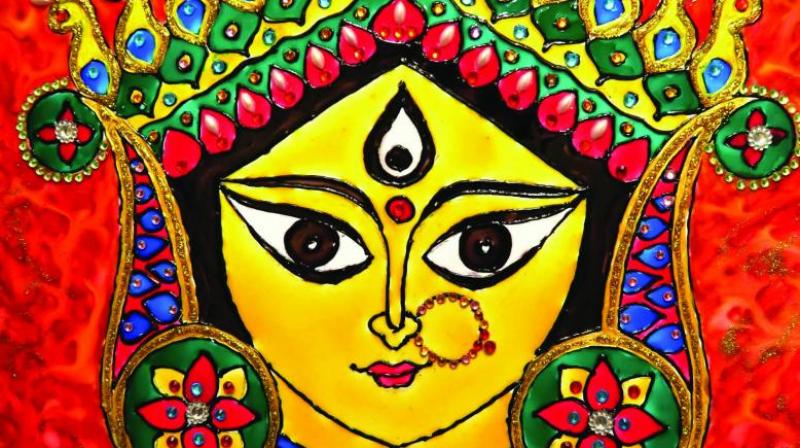 Navratri is divided into sets of three days to worship different aspects of the supreme Goddess.

Who, or what, are the Dasamahavidya — 10 forms of the Goddess — venerated during the nine sacred nights of the Navaratri festival?

Kali is the mistress of time, the mover of things, the primordial night in which creation is birthed. Kali is divine mother, also the one who slays. In her popular depictions, she laughs at the absurdity in the drama of creation. She wears a skirt made of human limbs, to denote the ultimate fate of human beings. Even so, her expression is beatific — she is the true knower of things.

Tara is the one who saves. Who, overflowing with compassion at the plight of humanity, provides succor. Her aid is not just material, but spiritual. Realising the agony of endless birth and death, she encourages a movement towards spiritual enlightenment.

Bhuvaneshwari is goddess/ruler of the created world where all beings exist. In her, we are born, grow and perish. In the way Kali represents time, Bhuvaneshwari represents space. She is the matrix and the field in which everything exists.

With Chhinamasta, we enter the realm of the Devi’s active doership. She holds her own severed head in her hand — the emblem of transcending the body, its ego, and its karmic burdens. The image is ghastly but the seeker must find its deeper meaning — the agency of the Goddess to enable conscious knowing that destroys ignorance.

Bhairavi is a wrathful manifestation, but it is not the anger of the ego. The goddess’ anger is a purifying fire that is aimed at the ego itself — all impurities are reduced to ash, leaving a purified consciousness behind.

Dhumawati is the “grandmother goddess” — representing the feminine wisdom of age. Her special power is obscuration; dhuma means smoke. By obscuring the known, she opens up possibilities for delving into that which lies hidden and unknown — the innermost self.

Bagalamukhi represents the power of the word. She reveals the opposite of any circumstance — defeat in victory, sadness inherent in laughter — thereby giving us the facility of becoming aware of reality as a whole and not just in parts. In this way, she removes duality inherent in our perception of the world, and focuses us on the whole.

Matangi is goddess of the mind and intellect. She focuses the mind internally, on the highest knowledge that can be gained out of any intellectual inquiry — the knowledge of Self and Reality, atman and Brahman.

Kamala, the lotus-faced one, is the goddess of abundance. She nourishes us, fulfils our material needs, thereby enabling a fuller, richer experience of being human. In a way, she represents the beginning of worship — when our worldly needs are met, we can focus our energies on the inner journey.