People are rendered redundant, disposable, useless in the very logic of the fossilised paradigm. 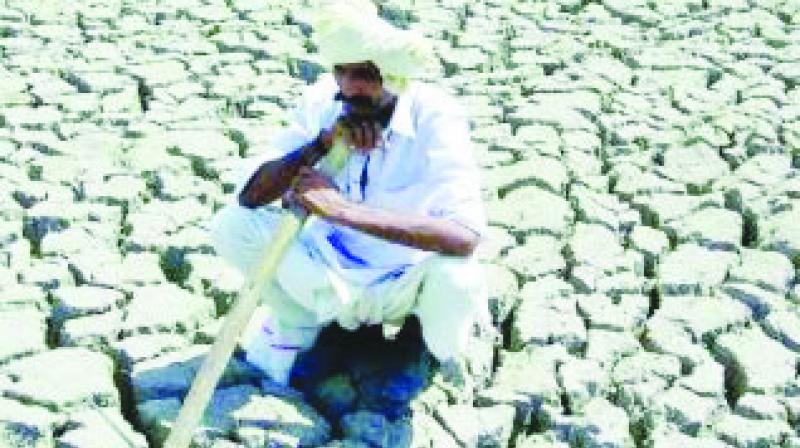 More than three lakh farmers in India have committed suicide since the bioimperialists entered our agriculture through globalisation and the so-called “free trade”.

I was inspired by Mahatma Gandhi’s spinning wheel (charkha) to start saving our indigenous seeds in 1987. A century ago, Gandhi made the charkha an instrument for freedom from the British Empire, which was an “empire of cotton”. Today we save indigenous seeds for freedom from seed monopolies in the hands of agrochemical and pharmaceutical giants such as Bayer Monsanto. One could call it an empire over life or bioimperialism.

Both the charkha and the seed embody freedom from fossil fuels, which have changed the trajectory of human evolution, bringing us to the brink of extinction.

And it is Gandhi and the spinning wheel which show the way for freedom in our times, the existential freedom to have a future as a species on our beautiful, generous, abundant, living earth.

We cannot build sustainability by burning up 600 million years of natures work in a few decades. The fact that we will run out of fossil carbon — oil and gas — is of course an important issue.

But more urgent is the social and ecological destruction being caused today.

Climate chaos, devastation of the ecosystems where the oil is extracted and the gas is fracked are different dimensions of the ecological costs. We also need to look at the social costs of displacement of people by fossil fuel, resource and energy intensive economies.

A fossil fuel economy shifts patterns of production and consumption to non-sustainability and distorts the measure of efficiency and productivity to destroy the planet’s limited resources as well work and create unemployment.

A fossilised paradigm changes our perception of technology. Instead of technologies being recognised as tools, which are means and should be assessed on how they were improving human and planetary well being, the tools were made the ends and human beings are transformed into means, mere inputs in the production process. Instead of tools fitting human ends, humans make way for tools the powerful have created for their profits and control.

Instead of being seen as the creative agents guiding production, people are reduced to a mere “input” and an illusion is being created that money and machines are the creative force in a totally manipulated measure of productivity which is supposed to measure output per unit input.

When people are seen as mere “inputs” in the production process, then “reducing the denominator” i.e. people, becomes the perverse path to make “productivity” increase. Farmers and workers must disappear for “efficiency” of the machine and profits for the money machine.

People are rendered redundant, disposable, useless in the very logic of the fossilised paradigm. With the imposition of machine learning (misleadingly referred to as “artificial Intelligence”) and machines as workers (robotics) the new robber barons who are building new empires based on digital technologies are increasingly referring to 99 per cent of humans “useless people”.

Take just two indicators of the human disposability built into the structures of empire based on fossil fuels and mechanistic mind.

More than three lakh farmers in India have committed suicide since the bioimperialists entered our agriculture through globalisation and the so-called “free trade”. Farmers are in distress, and are not able to survive.

Recently it was reported that seven lakh livelihoods (70 per cent of the total) in the khadi sector have been affected as a result of introducing the distorted measure of productivity.

Agriculture is the culture of the land. Farmers, our annadatas, are at the heart of agriculture. Seed is both the first link in the food chain and simultaneously the means of production as well as the most important output of renewable systems.

The indigenous seeds are bred by farmers for renewability, diversity, nutrition, taste and resilience. Wherever farmers have reclaimed native seeds as a commons, they have reduced costs, increased incomes, become debt-free and are not driven to suicide.

Corporate seeds are based on theft of farmers’ varieties which are turned into “genetic raw material”, then modified to be uniform, to sell more chemicals. Seed, the ultimate symbol of renewability, is made nonrenewable “intellectual property” which farmers are forced to buy every season at a very high cost. This shift from renewable and organic seed to nonrenewable chemical corporate seed creates a system in which farmers spend more and earn less. This is the primary cause for farmers’ debt, distress and farmers suicides.

Fossil fuel-driven satanic mills and their hunger for raw material and markets was the reason for the new poverty created in colonial India by the destruction of livelihoods.

Gandhi thought of the spinning wheel as a symbol of liberation and a tool for development to regenerate livelihoods that the empire had destroyed. He said:  “Anything that millions can do together becomes charged with unique power”.

The spinning wheel challenged the “empire of cotton” intellectually, politically and economically.

Why must India become industrial in the Western sense? Gandhi had asked.

“What is good for one nation situated in one condition is not necessarily good for another one differently situated?” Mechanisa-tion is good when hands are too few for the work intended to be accomplished. It is an evil where there are more hands than required for the work, as is the case in India.

The khadi sector grew from our struggle for freedom, including the freedom to think for ourselves and decide our path for development, giving priority to freedom, the creativity of people and economic sovereignty (swadeshi).

For sustainability, justice, dignity and freedom from want and ecological destruction, we need to redefine efficiency and productivity from the current constructs, which have reduced humans into mere inputs into a machine. This pseudo productivity is a crime against the earth because by hiding resource inefficiency, it is destroying the earth with increasing greenhouse gases, toxics and pesticides, pollution and waste. It is a crime against humanity because it is robbing us of our right to do creative and meaningful work.

The charkha is not an object. Khadi is not a product. It is a philosophy, a way of thinking, and a way of being. It is definitely not an obsolete, primitive technology that needs “improvement” in productivity that lays waste the very hands for which khadi was created. It is productive in a different way. It produces livelihoods, meaning and dignity. It protects the earth. Nature and people are not inputs but their well-being is the very end guiding any system of production and consumption

In the creative hands and minds of our farmers and artisans lie the freedom from fossil fuels which are destroying both the planet and the meaningful work, contributing to climate chaos on the one hand and the dark storm of growing unemployment and disposability on the other.