In grim times, a way forward?

Kashmir is witnessing an uptick in militant and criminal activity, as in the recent spate of bank robberies in the Valley. 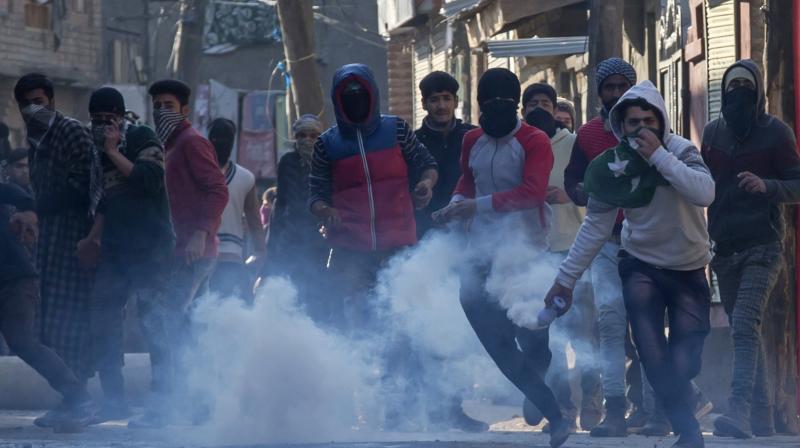 A masked Kashmiri protester runs with an exploded tear gas shell before throwing it back at Indian security forces in Srinagar, Indian controlled Kashmir. (Photo: AP)

It was rainy and foggy in New Delhi, with overcast skies alternating with bright sunshine in other parts of the country. The traditional enthusiasm and pride were still there among the spectators, but this time around so too was an undercurrent of dissatisfaction and unease at the state of the nation, somewhat disturbing on the nation’s 68th Republic Day. The ever-magnificent spectacle of the parade was beamed countrywide from Rajpath.  This time a military marching contingent from the UAE led the spectacular show, which also featured weapons systems “Made in India”, the “Dhanush” a 155- millimetre medium gun and the Tejas light fighter aircraft, taking to the skies on public display for the very first time. The dull grey weather reflected the mood of the nation on other issues as well, morose and irritated with the hypocrisy and chicanery rampant amongst the political classes of the country, and demonstrated on an almost daily basis on almost any and every matter, ranging from civil disturbances whipped up against a Supreme Court ruling banning the “traditional” animal-baiting sport of Jalikattu; mob violence and police firing at a rural electrification project being undertaken by the Power Grid Corporation; vandalism in a hospital by gangs of politically-connected street lumpen; and the sorry spectacle of a sordid, multi–cornered political steeplechase to select an acceptable replacement for the deceased chief minister of a state, bogged down in a morass of utter legislative anarchy.

The instances of public folly across the country seemed to be unending. Superimposed on all this, the demon of demonetisation played its own role in raising the collective blood pressure, while elsewhere, an admonition in unvarnished words by the Chief of Army Staff speaking to reporters at the multiple funerals of an officer and three rank and file killed during  encounters with militants in Kulgam, Badgam and Shopian districts in Kashmir, warning wrongdoers of the possible consequences of their folly should they continue to provide “crowd cover” to militants attempting to escape from Army patrols on their trail. His blunt remarks touched off a cacophony of indignation by India’s human rights circus, their chorus in tandem with the remarks of separatist proxy soldiers of Pakistan hiding within the woodwork of the Hurriyat and other political syndicates operating in the Kashmir Valley. By contrast, few in India really noted the harsh tone and tenor of the Pakistani Army Chief Gen. Qamar Javed Bajwa after an explosion at the tomb of the Sufi saint Lal Shahbaz Qalandar at Sehwan in Sindh, which killed 80 worshippers and for which the Islamic State (IS) has claimed responsibility. A message from the Inter-Services Public Relations  of that country was immediately issued — “Each drop of Pakistani blood shall be revenged [sic], and revenged immediately. No mercy to anyone”. India is not Pakistan, but the core of the message from the Chief of the Indian Army, though  immeasurably more moderate , was essentially the same – the Indian Army has a task to perform in Kashmir and shall carry it out. Those who bear ill will towards this country and interfere in any way with the operations of the Army should be prepared for whatever consequences that they would call down upon themselves. It is a fair warning. Indeed even as the COAS was speaking to the Indian media, buglers in the brilliant crimson turbans of the Jammu and Kashmir Light Infantry, played the poignant notes of the Last Post at the  military ceremonial.

All in all, the mood of the nation on Republic Day was mixed. There was something for every palate, pure spectator sport, the Great Indian Tamasha, so dear to the Indian heart, as in the electoral drama being played out in various states as they go to the polls for Assembly elections this year. But behind the tumult and the shouting at the hustings, the hydra-headed guardians of the Indian State have to remain eternally vigilant, prepared to simultaneously strike in multiple directions. Kashmir is witnessing an uptick in militant and criminal activity, as in the recent spate of bank robberies in the Valley; in the North East Naga–Meitei conflict is again brewing in Manipur, a corner of India which is truly forgotten; and the Chhattisgarh-Andhra Pradesh-Odisha region, a perennial inflammation in the innermost guts of the country. Tension of any kind in the southern India is always cause for apprehension — memories of the Liberation Tigers of Tamil Eelam (LTTE) remain branded permanently into the national consciousness. Perhaps as a result, various investigative and intelligence departments of various state police forces have become semi-permanent participants in almost every criminal investigation in the country, a plethora of which are operating across the country as Special Investigation Teams (SITs), or Anti-Terrorist Squads (ATS).

The same villages in the Kashmir Valley that produce radically-indoctrinated militants are also home to the hardy Gujjar and Bakarwal soldiers of the Jammu and Kashmir Light Infantry who serve in the Indian Army with bravery and distinction on the Siachen Glacier and in Kargil. Surely this distinguished regiment highlights another of the paradoxes of Kashmir, and may possibly even indicate a way forward?