Indian cricket bigger than all who served it well

Cricket savants were shocked at the weak-kneed response from the administrators. 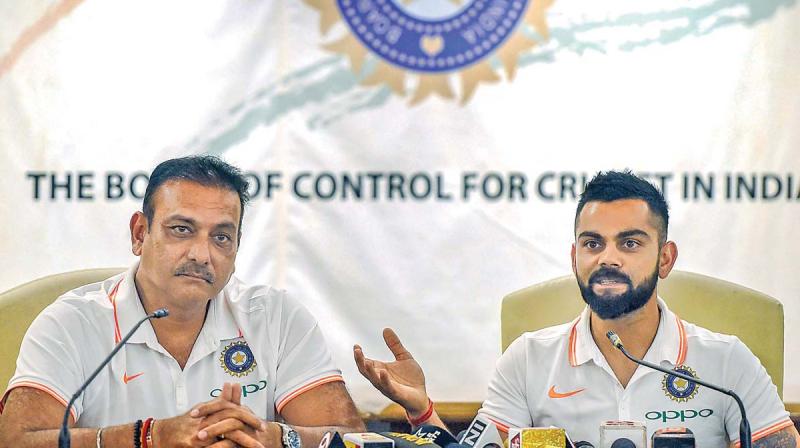 Under the new cricket setup in India, only three selectors were appointed, with one of them being the chairman. The erstwhile five-member zonal system was scrapped by the Justice Lodha Committee. Between the three Indian cricket selectors, they have not played too much international cricket — M.S.K. Prasad (chairman) played six Tests and 17 ODIs, Devang Gandhi played four Tests and three ODIs and Sarandeep Singh played three Tests and five ODIs. The captain and the coach are invited to the selection committee meetings to present their opinions on team players though they don’t have voting rights in team selection. Very clearly, the troika of selectors given the width and depth of cricket they have played will be subaltern to captain Virat Kohli and coach Ravi Shastri. However, in late August, the BCCI reinstated former Indian players Gagan Khoda and Jatin Paranjpe as senior national selectors after both were removed in January last year from the selection panel for not being Test cricketers, as per the requirement set by the Lodha Committee. Both were, however, being paid as per their contract, as they could only be removed officially in the board’s AGM. Khoda and Paranjpe thus rejoined chief selector M.S.K. Prasad, Sarandeep Singh and Devang Gandhi after the Supreme Court modified the Lodha reforms and reinstated five selectors in the national panel. Khoda played two ODIs while Paranjpe played four. Logic says that none of the five can ever be visualised as standing up to the duo. When you move the furniture around, it stubs toes and people get hurt. India’s multiple cricket administrators have to understand that you can’t teach a cat how to go and fetch. In the power vacuum that exists in Indian cricket, various people are making merry. This is nobody’s private fiefdom — we play for India.

Indian cricket has come a long way from Vijay Merchant using a casting vote to make Ajit Wadekar India captain in place of Mansur Ali Khan Pataudi after a decade-long stint as the helmsman. The effete selection panel doesn’t cut any ice, Paranjpe’s contemporaries in Mumbai cricket were Ajit Agarkar and Raju Kulkarni, who played much more international cricket than him. Or Raj Singh Dungarpur, who although not a Test cricketer always put his best foot forward for Indian cricket. Dilip Vengsarkar batted for a pay hike for the selectors in 2007. Now the selectors, after the latest August decision, get paid Rs 90 lakhs per annum, while the chief selector gets Rs 1 crore. Now that is a humongous number, a corporate salary. According to the income-tax department, only 1.40 lakh assessees declare income of over Rs 1 crore per annum in India. The power structure that runs Indian cricket is at its most fragile and a result of this is the emasculation of the selection committee. One the one hand is the committee of administrators appointed by the Supreme Court — now down to two from four with only Vinod Rai and Diana Edulji surviving after Ramachandra Guha and Vikram Limaye quit for different reasons. On the other side is the cricket board — uncertain, manacled and fettered by the Supreme Court. In the centre is CEO Rahul Johri, now under the scanner for #MeToo allegations.

As such, the once powerful cricket board, which by nature of its acronym BCCI — the Board of Control for Cricket in India — is a pale shadow of its erstwhile self. Some of the decision-making between the “pall bearers” remains suspect and completely hair-brained. Power is vested in two individuals in Indian cricket — Ravi Shastri and Virat Kohli — coach and captain respectively. While Kohli in an interview on the eve of the tour to Australia said that Shastri is not his yes man, their combined decision-making skill has cost India dear many times. Too much aggression, constant tinkering with personnel, square pegs in round holes, needless persistence with substandard cricketers and more than anything else, runation of Cheteshwar Pujara and Ajinkya Rahane’s Test career progression — acts of commission and omission with no deterrence whatsoever. From the best touring team ever to no international team tours well is a scathing indictment of this journey into an abyss of desolation. Joe Root’s England has just triumphed over Sri Lanka, vanquishing them with a trinity of spinners. By constantly gearing yourselves using an echo chamber, you can delude yourself, but the question is for how long. The South African tour was salvaged with victories in the abbreviated versions, while in England more or less the entire tour was an unmitigated fiasco. Cricket savants were shocked at the weak-kneed response from the administrators.

With the balance of power being what it is, important things are slipping through the cracks. It is a situation that the coach-captain duo revel in, for there is a distinct lack of checks and balances. The COA itself is split over CEO Rahul Johri’s predicament, with one trying to nail him and the other trying to save him. The CEO is embroiled in a potboiler and the inquisition committee is muddled in its thinking. When Binny Bansal and M.J. Akbar can lose their high-profile jobs, why this attempt to save Johri? Actually it should be incumbent on him to quit and walk into the sunset. As we go into combat in Oz against what appears to be a weak Australian team, we should remember the post-Kerry Packer series where a mothballed Bob Simpson was drawn out of hibernation to defeat what appeared to be full-fledged Indian team, we lost the series 3-2 despite Sunil Gavaskar’s heroics and the collective exploits of B.S. Chandrasekhar, Bishan Singh Bedi and Erapalli Prasanna. The 1977-78 series saw a virtual second XI led by 41-year-old Simpson with one genuine great in Jeff Thomson take on India. Australians play sport with great pride. The primacy of cricket is well established in Australia, barring two periods of decline and near demise. Australian teams have always been all-conquering. The first came in the 1960s and early 1970s when Rod Laver led a tennis renaissance in Oz. Laver, Ken Rosewall, John Newcombe, Roy Emerson, Mal Anderson, Geoff Masters and Colin Dibley became the dominant tennis nation in the world, winning Slams and the Davis Cup conclusively. The second was when Kerry Packer debilitated the game by turning cricketers into mercenaries and launching World Series Cricket with all top-notch Australian players walking out. Here again the Aussies scrapped with second and third-rung players till they formed a cohesive unit under AB — Allan Border. Since then Mark Taylor, Steve Waugh, Ricky Ponting and Michael Clarke have given Australian cricket new direction to become world beaters.

While the Supreme Court cleaned the Augean stables at the BCCI and they deserve thanks for dispensing with the zamindari and jagirdari system that prevailed in Indian cricket for years at end, the current system is still flawed. In terms of value maximisation, it continues to rake in the big bucks, but cricket and the directional call that Indian cricket is taking is questionable. Meritocracy has to be rewarded, extended runs for maladroit and mindless cricketers have to be consigned to the rubbish heap, performance has to be the only criteria. The power vested in Shastri and Kohli has to be toned down, yes men have to be filtered out. Some of the on-field and administrative decisions taken by the team management in England cannot be allowed in any democratic setup. The game cannot be tinkered or tampered with. Equally, systems and processes cannot be compromised. Indian cricket is bigger than all those who have served it well, for you play under the aegis of the national flag. I am not challenging Shastri or Kohli for their patriotism, both have been great servants of Indian cricket, but with the democratisation of Indian cricket where players from Ranchi to Assam to Odisha to Kerala to J&K have played with great distinction, it is time to enlarge the scope of selection and team management. It is a lacunae staring Vinod Rai in the face and he, along with acting president of a crippled BCCI C.K. Khanna and a Rahul Johri embroiled in #MeToo are failing all of us. Mark Taylor gave Australian cricket new calling by zoning in on the baggy green, while Allan Border took guard to rebuild a hurt nation’s pride. Many hailed him as the most significant player since Donald Bradman in Australian cricket history. Kohli and Shastri can turn this storyboard around by being more accommodating, flexible and ductile. If not, then far bigger men have been replaced in the whirligig — Tiger lost his job as did Sachin Tendulkar and Ajit Wadekar, both Gavaskar and Kapil Dev alternated exiting in and out of revolving door. The game’s primacy and paramountcy cannot be disputed; transparency has to be the norm, opacity is dangerous.