India has 600 career diplomats serving in the MEA and at 162 Indian missions abroad. 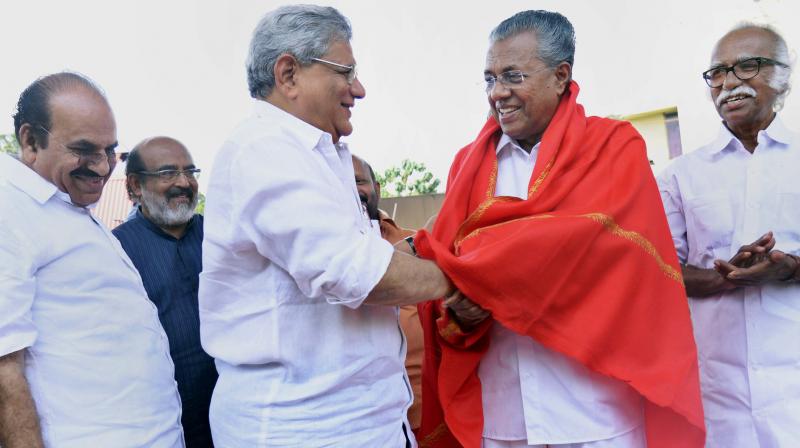 CPI(M) General Secretary Sitaram Yechury giving a red shawl to Kerala Chief Minister Pinarayi Vijayan at a dharna in front of the Reserve Bank of India office in Thiruvananthapuram on Friday. (Photo: PTI)

It may sound unusual but it’s within the rules apparently. Indian Forest Service (IFoS) officer Saurabh Kumar has been appointed a counsellor in the embassy of Moscow. His appointment is for three years. He replaces another non-Indian Foreign Service officer P. Mohanty, who is in the Indian Ordnance Factories Service.

However, there is another reason also. Many Indian missions need expertise other than diplomacy alone. For example, IAS or other Group “A” service officers with experiences in working in the finance or commerce ministries are appointed in foreign missions of India for assignments related to trade, economy and commerce. Mr Kumar has been working as deputy secretary in the ministry of defence.

He’s not the only IFoS officer who got posting in foreign locations. A 1984 batch IFoS officer Sanjay Kumar has been working as an executive director in Climate Parliament, London.

Babu vs babu in Kerala

In Kerala, a tussle has broken out within the state’s bureaucracy. The state’s anti-corruption agency has been accused of targeting top babus for alleged corruption. This has put chief minister Pinarayi Vijayan in a difficult position.

Although the Vigilance and Anti-Corruption Bureau (VACB) has only acted on court orders, the officials subjected to “raids” happen to be additional chief secretaries Tom Jose and K.K. Abraham. The director-general of police (state crime records bureau) N. Sankar Reddy too is facing a vigilance investigation. The plot however thickens, since vigilance director Jacob Thomas has himself been accused of irregularities and violations of service rules during his earlier innings at the port department and the Kerala Transport Development Finance Corporation. The accused officials have complained to the CM that the way VACB had gone about its inspection showed ulterior motives on the part of Mr Thomas.

For the CM, it’s a dilemma since appointing Mr Thomas as vigilance chief was among his first decisions. And true to his reputation, Mr Thomas has been going after powerful politicians across the spectrum and ruffling feathers since then.

What PM wants, he gets it done

From the next fiscal, babus can file performance reports online. The department of personnel and training has tweaked the service rules to allow this, following Prime Minister Narendra Modi’s directive on quick promotion and for greater transparency.

It has also been decided that officers can be assessed solely on their overall record and self-assessment for a year if their Annual Performance Appraisal Report (APAR) is not recorded by December 31 of the assessment year.

The letter written by establishment officer Rajiv Kumar hopes that “by now sufficient progress would have been made towards the compliance with the earlier directive and the departments would be able to roll out mandatory online filing of APARs/Annual Confidential Reports from the financial year 2017-18.” It adds that the government now will ensure online filing of annual performance reports of all officers of 36 Central civil services. What Mr Modi wants, he gets it done.