Jagdish Rattanani
The writer is a journalist and a faculty member at SPJIMR, and founder-editor of The Billion Press. The views expressed here are personal.

Finally, the freedom given to the security forces to act is not freedom to make the lives of ordinary people more difficult. 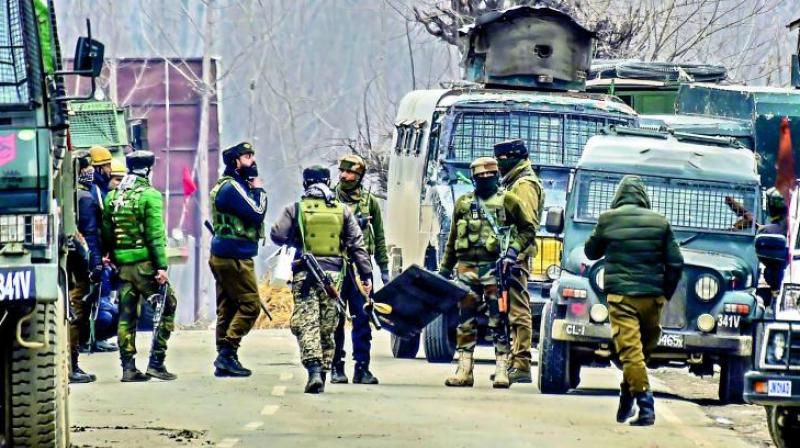 Violence has been on the rise and in many ways far worse in the last year. (Photo:PTI)

The deaths of 44-plus CRPF jawans in the suicide bombing in Pulwama last week raises many questions and changes many things in Jammu and Kashmir. The anguish and outrage at the suicide bombing has been voiced and felt across the nation. The social media is full of demands for tough retaliatory action. There is need for this rhetoric to cool as the government weighs its options and considers its actions. Some, like the withdrawal of MFN status to Pakistan, are unlikely to make much of a difference. Low intensity cross-border action has been attempted (and even owned up) before by this government; but it clearly achieved little. There remains the risk of an escalation in a situation that is already tense and volatile. All parties have come on one page to condemn terrorism in all forms and the support being given to it from across the border. But the coming Lok Sabha elections add a new dynamic to the situation and will influence the way the conversation pans out in the coming months.

Meanwhile, a lot of diplomatic work remains to be done in getting the international community to name Masood Azhar, the founder and leader of the UN-designated terrorist group Jaish-e-Mohammed, as a terrorist who must be brought to justice. The JeM was declared a terrorist organisation by the US state department way back, precisely on December 26, 2001. Britain had proscribed it even earlier, in March 2001, and followed it up by banning its splinter group Khuddam Ul-Islam in October 2005. Nothing much has clearly moved on that front.

Amid the terrible turn of events, reports of attacks on Kashmiri traders and students across India are very disturbing. A series of reports have been flowing in on the social media over the last few days. Not all of them are true.

The CRPF has officially denied at least one alleged incident in Dehradun. On the other hand, Omar Abdullah, former J&K chief minister, has met Union home minister Rajnath Singh to express concern about the intimidation of Kashmiris. He has asked for a nodal officer to be appointed to respond to the threats to Kashmiris. The home ministry for its part lost no time in issuing an advisory to all states and Union territories to ensure the safety and security of Kashmiris across the nation. Targeting Kashmiris who have nothing to do with terrorism or the attack on security forces in their home state is precisely the kind of divide that the terrorists would like to see. This is playing right into the hands of those who wish to break the country, and build the narrative of a nation divided. What is required, therefore, is some cool heads and calm thinking.

Matters have also turned worse with false propaganda that is being directed to incite passions. As the CRPF itself has pointed out in an advisory: “It has been noticed that on social media some miscreants are trying to circulate fake pictures of the body parts of our martyrs to invoke hatred while we stand united. Please do not circulate/share/like such photographs or posts.” In fact, the CRPF moved fast to curb misinformation, and publicised its helplines to help reporting of attacks against Kashmiris elsewhere.

In Kashmir, there has been much talk of the BJP’s muscular policy. About 10 days before the Pulwama attack, the Prime Minister spent a day in the state, and met newly elected sarpanchs. At a gathering in Srinagar, he said: “We will tackle every terrorist in a befitting way. We will break the backbone of terrorism in Jammu and Kashmir and fight it with all our might.” This was a reiteration of the BJP’s muscular approach that has been in play for some time, fitting into the narrative it offered when breaking the alliance with then chief minister Mehbooba Mufti of the People’s Democratic Party in June last year. Yet, the approach has coincided with rising violence, more terror attacks and the alienation of the people. After the Prime Minister’s address in J&K on February 3, the state’s political parties were highly critical. Just a day before the Pulwama attack, Ms Mufti held a press conference to criticise what she called the BJP’s “hideous agenda” through the governor, who now runs the administration. Her exact words: “We acted as a major hurdle for the BJP to implement its agenda in Jammu and Kashmir. However, since the time it toppled the democratically elected government, the party is trying to rule the state through the governor and is making strenuous efforts to alienate the Muslims of the state.” If these statements tell us anything, it is about the slide in the situation — in innumerable ways — that have raised the hackles of people.

Violence has been on the rise and in many ways far worse in the last year. The number of terrorist-linked incidents was reported at 614 in 2018, almost three times than those in 2014 and 2015. The total number of terrorists killed in 2014 was 110. In 2018, 257 were killed. But the death toll of civilians and security forces killed also rose — from 75 in 2014 to 129 in 2018, according to figures submitted by the government to the Lok Sabha. It would appear that the rough and tough approach offered by the BJP is not working too well.

The swift developments after the Pulwama attack and the focus on the nature of the response runs the risk of India failing to ask some hard questions on its intelligence methods and mechanisms in J&K. This is clearly a massive failure of intelligence. Those at the helm must be made accountable. Some tough questions must be asked on how a massive collection of arms was put together in a village and let loose so easily by a very young attacker. If this is the nature of attacks to follow, it changes the picture in Kashmir — it will make every citizen suspect, every vehicle a source of trouble, and make handling the situation that much more difficult. Even though it is difficult to prevent every attack, there should be some capacity to have credible intelligence inputs. These are difficult times, but we must not shy away from asking difficult questions. Given the huge budget for intelligence, we can and must do better.

Finally, the freedom given to the security forces to act is not freedom to make the lives of ordinary people more difficult. Great care must be taken not to alienate ordinary Kashmiris. They are the worst sufferers in this endless cycle of violence and nobody has a greater stake in peace than the ordinary people who simply want to be allowed to live and go about their lives in this cruel weather.