The Brexit debates begin in the House of Lords this week. 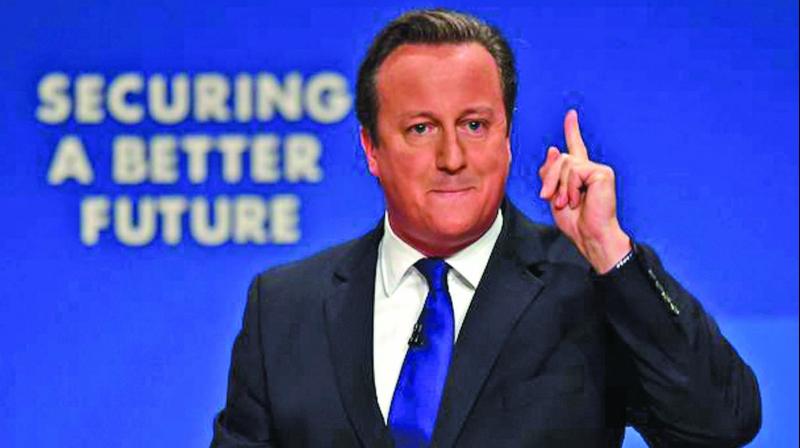 Yes, it is debatable — but could London be considered the fashion capital of the world, specially if one examines the amount of time spent discussing who wears what? And now that the former Prime Minister’s wife, Samantha Cameron, has launched her own line, we know that there is a fashionable life post-Downing Street.

Perhaps she can thank the years spent thinking about “what to wear for high-profile occasions” for giving her the cutting edge on couture.

It seems that in between her high-flying job at Smythson, (which reportedly paid her more than the PM) and looking after her four children — one of whom tragically passed away before David Cameron became Prime Minister — she was able to find time to sit and sew at Downing Street, and learn how to “pattern cut”. The fact that she could host the London Fashion Week, and also meet the top international designers, must have been undoubtedly inspirational. How many of us can call up Anna Wintour for advice? Hmmmm…

So, unlike other new children on the block, her designs, meant for the modern working woman (and only go up to size 14), are already on the front pages of newspapers and magazines. Like Britain’s present PM, Theresa May, and the Duchess of Cambridge, Kate Middleton, she has also topped fashion lists in the past. And clothes that she wore have reportedly flown off the shelf.

But as she sympathises today with Melania Trump being out there in the limelight and critiqued over everything, clothes undoubtedly maketh the woman! No white crushed handloom saris will do out here…

Now do we have style icons like that in India…? Perhaps the chic Shaina NC and Neelam Pratap Rudy? Can you think of some more?

As we gear up for the 70th year of the Partition of India, and Gurinder Chadha’s film, Viceroy’s House, wins accolades — it is interesting to see the other efforts being made to educate the British about their erstwhile colony. Recently I (representing the Partition Museum) was invited to speak in a panel at a meeting at the House of Lords over the importance of teaching schoolchildren about Partition. Interestingly, in a pilot project, a play was written by Sudha Bhuchar called Child of the Divide based on a Bhisham Sahni short story Pali. The play examines what happens to four children as they experience the Partition and separation from their homes and families.

The play was shown to some select schools to teach and sensitise students about events in 1947 — and it was discovered to be a great medium of instruction. Not just the British children, it was found that even Bangladeshi, Pakistani and Indian children had no idea that once upon a time they had all belonged to one country, India!

This whole effort is the brainchild of Canon Michael Roden, who set up the Partition History Project after interacting with the large Sikh community at Hitchen where he lives. He discovered their painful stories — and thought that some interfaith dialogue needed to be initiated.

The discussion over this very emotive subject also made many want to connect with the work of the Partition Museum at Amritsar, where too we receive large numbers of school and college children who feel they know very little about Partition.

It was, of course, ironical that this time it was a devout Christian, Michael Roden, who brought us all — from different communities together, in the UK!

Now this is a conundrum for literature festival enthusiasts: celebrity autobiographies that exist, and which celebrities claim to have “never written”. Can one really become so forgetful — specially if it is a 75,000-word tome? Well, while he can’t get no recollection — Mick Jagger says that a book written in the ’80s and which lies with publisher John Blake — was simply “not written” by him. But then whodunit? As various scandalous and juicy bits are excerpted from the manuscript, and we are forced to recollect the Rolling Stone’s rather colourful life — this non-book is fast becoming a bestseller.

The wonderful part of living in London is meeting so many friends from India who, one way or the other, consider this their home. Recently, we met old friend Karan Thapar at the home of the new high commissioner, Y.K. Sinha, and his charming wife Girija Sinha. It was an evening spent discussing many twists and turns of history. And now the high commissioner has arrived here as the UK stands at the cusp of history and makes a final break from the European Union.

The Brexit debates begin in the House of Lords this week, and with more than 150 speakers it promises to be a session that goes late into the night… it will be very interesting to follow, but one can only anticipate the anger and frustration of those who want to “remain”.