Lt. Gen. Sinha was very much an old-world aristocrat in the truest sense of the word, calm and collected under all circumstances. 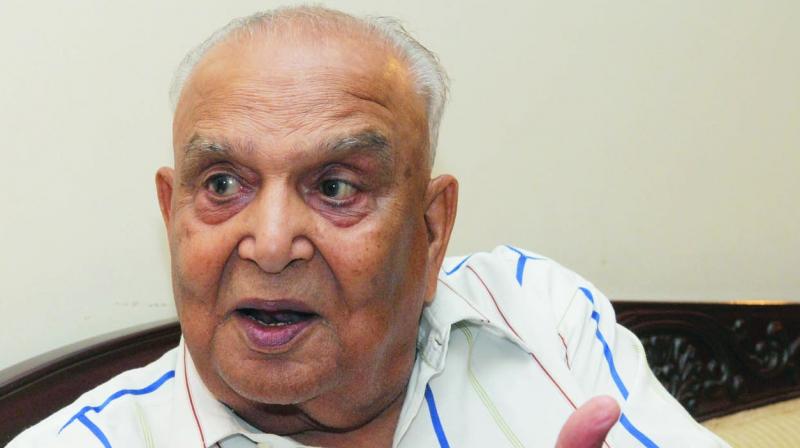 I had the privilege of knowing Lt. Gen. Srinivas Kumar Sinha, PVSM (Retired), but not his full name until quite recently. He was an “officer and a gentleman” of the old school whose character and moral values sprang from his undoubtedly privileged family background from an established landowning Bhumihar family of Bihar which was politically influential and well connected. Lt. Gen. Sinha was very much an old-world aristocrat in the truest sense of the word, calm and collected under all circumstances, just, fair, at the same time strict and even handed in all matters. He was endowed with a personal sense of honour and the most impeccable integrity. I was aware of his advanced age, and I knew the end had to come sometime, but nevertheless I was indeed sad when the news arrived of his passing.

Lt. Gen. Sinha was a former Army vice-chief, a former governor of Jammu and Kashmir and of Assam, and a former Indian ambassador to Nepal. At that time, I remember wondering that out of all these illustrious posts, which one would have given him the most satisfaction and happiness. My own guess was it would have been his tenure as the Indian Army’s vice-chief, though his natural ambitions of becoming Chief of Army Staff had remained unfulfilled. He had approached close to the summit but yet remained just a few feet short of it. He retired undefeated, but with his personal honour and integrity intact. The true nature of his moral courage and strength of character came shining through brightest in his hour of defeat, when he resolutely refused to compromise his principles with the unsavoury political machinations of a defence minister (who later became Supreme Commander of the Armed Forces, God help us!) and resigned rather than deviate from his own stand.

He had joined the Indian Army during World War II and was commissioned into the Jat Regiment, whose battalions had two rifle companies each of Hindu Jats and Punjabi Muslims. 2nd Lt. S.K. Sinha was posted to one of the Muslim companies, and moved with his unit to Myanmar and later to the Dutch East Indies. World War II ended in 1945 and the Indian troops were tasked with supervising the surrender of the Japanese garrisons, which had been located there. Meanwhile, the struggle for independence from Dutch colonial rule had begun in the East Indies, and as a young captain Gen. Sinha had seen the beginnings of the violent struggle for independence, that ultimately resulted in the formation of the new nation of Indonesia. Indonesian nationalists had repeatedly approached Indian Muslim soldiers to back them in their own struggle against the return of their former colonial masters. Some Indian soldiers did desert and stayed behind when the Indian formations returned to India in 1945, where India’s own struggle for independence against British rule was well under way. There was much work to be done in India too. Independence in 1947 was approaching, and so too was Partition and the division of the Indian Army between India and the new Muslim homeland of Pakistan. As general staff officer Grade 2 at Army Headquarters, soon to be split between India and Pakistan, Gen. Sinha was a working hand directly involved in the whole process, and witness to the “birth of the nation”. He had to rush as a liaison officer and an observer to many hotspots that were erupting everywhere, most notably in Kashmir, which had been invaded and nearly completely overrun by tribesmen sponsored by Pakistan. It was a shape of things to come and Lt. Gen. Sinha began recording and writing his observations, that were to be published after his retirement as a book — Operation Rescue: Military Operations in Kashmir 1947-1948. The book became prescribed study material for the Defence Services Staff College.

“Shankar says he became Chief of Army Staff by an act of fate... In my case, fate decided I was not to become the chief, even though I had been cleared for it,” Lt. Gen. Sinha said while speaking at the Kolkata launch of my book Officially at Peace, that he had very kindly agreed to preside over. I had approached Lt. Gen. Sinha as like many others in the Indian Army, I considered him as the quintessential “thinking man’s soldier” for whom I had high regard, both as a military professional as well as an intellectual in his own right. It must never be forgotten that the Indian Army is a manpower-intensive organisation and will continue to remain one, in view of the multifarious operational responsibilities it is required to undertake and the terrain on which it is required to operate. Management of human resources will therefore always remain an issue of critical importance to the Army, in some senses even more than to its sister services, which are relatively more technology-driven and less manpower-intensive.

Lt. Gen. Sinha was blessed in this context with a clear and sharply analytical mind, which, as adjutant-general of the Army, its chief personnel officer, enabled him to take up cudgels cogently and forcefully on behalf of the Indian soldier, on a variety of important issues. Lt. Gen. Sinha was one of the most significant contributors to the critical aspect of organisational strengthening and development of the Indian Army in terms of pay and allowances, medical facilities benefits for the rank and file and, above all, the inter-service protocol of the armed forces vis-à-vis the civil services. His presentation to the Third Pay Commission in 1971 set the board for future jousts on these issues, with the Sixth and later the Seventh Pay Commissions as well as with the civil bureaucratic hierarchy of the Government of India, challenging their sense of divine right and “authority without responsibility”.

Rest in peace, Lt. Gen. Sinha. The Indian Army owes you a debt of gratitude that will be difficult to repay.
Jai Hind!