Opinion   Oped  19 May 2019  I voted to keep majoritarianism at bay
Opinion, Oped

I voted to keep majoritarianism at bay 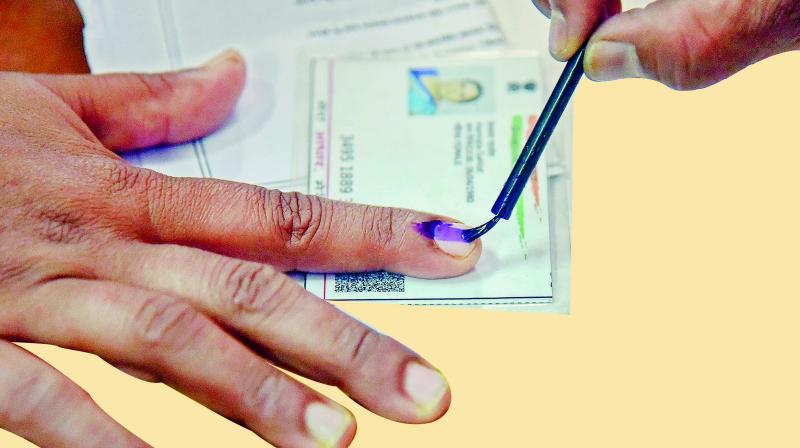 It is for the wellbeing and security of those of my fellow Indians, who are affected and who I care for, that I have voted.

Personally there is little at stake for me in this election. I am a well-off, savarna Hindu male of middle age. I have faced no hardship or prejudice or difficulty ever in my life and I have needed nothing and expected nothing in particular from the state apparatus.

No government policy really affects me or perhaps even touches me. My life was no different during the 10 years when Manmohan Singh was Prime Minister than the five years when Narendra Modi was or Atal Bihari Vajpayee was.

Even the most intrusive policy does not touch my life or the lives of those like me. I was unaffected by demonetisation. I did not stand in line and was not inconvenienced personally. I don’t have an Aadhaar card or a ration card and the points where I engage with the government are quite few. I need my passport renewed once every few years and for that I have to wait perhaps an hour or so in some office. But other than that I cannot think of how Mr Modi or Mr Singh or Mr Vajpayee or whoever else did something that would touch me negatively or even positively through their policies.

I am willing to pay higher rates of income tax because I have more money than I need and I am not one of those who feels relief on the occasion when the Union Budget lowers income tax.

On the side of security, again, because of my class and privilege, I have not personally been touched by political violence. I lived through and experienced two riots of extreme intensity. I was not affected by them materially or physically. I was not unsafe (I lived in a Hindu neighbourhood next to a large temple) and nobody I knew was harmed.

I was not positively affected by the violence either and I did not feel any asmita or loss of asmita. I felt ashamed of being Gujarati and still do. Collective punishment on a community is an act of barbarism. Civilised people do not do it, civilised people do not condone it, or justify it or ignore it.

In the current campaign, there is nothing either side is offering that will change my life. I am almost 50 and have seen enough general elections to not be moved strongly by the things that are said in them. One of the candidates this time has said Gandhi’s murderer was a deshbhakt. Her party has asked her to apologise but the fact is that she is right. Godse was a deshbhakt in the way that deshbhakti has been defined by this government and its leader. An individual who pays taxes and tries to follow Indian laws is not a deshbhakt. You have to say nasty things against Pakistan to become a patriot. Godse’s statement in justifying shooting Gandhi was as follows: “Above all, I studied very closely whatever Veer Savarkar and Gandhiji had written and spoken, as to my mind these two ideologies have contributed more to the moulding of the thought and action of the Indian people during the last thirty years or so, than any other single factor has done.”

Godse felt about Gandhi that “the accumulating provocation of 32 years, culminating in his last pro-Muslim fast, at last goaded me to the conclusion that the existence of Gandhi should be brought to an end immediately. When top leaders of Congress, with the consent of Gandhi, divided and tore the country — which we consider a deity of worship — my mind was filled with direful anger. I bear no ill will towards anyone individually but I do say that I had no respect for the present government owing to their policy which was unfairly favourable towards the Muslims. But at the same time I could clearly see that the policy was entirely due to the presence of Gandhi”.

I cannot think of any part of this statement which this government, this Prime Minister, his party and his ideology would disagree with. Sadhvi Pragya is not wrong, and that is why she has retained her Lok Sabha ticket.

As I was saying, none of this affects me in any real way and it is not for myself that I have voted (I should reveal here that I voted for an Independent candidate named Prakash Raj). It is for other Indians who are actually affected by this election that I have tried to cast my vote. There will be many of us who will be physically and deliberately harmed because of the actions of the government. There will be millions of us who will feel fear and insecurity because of the menace of majoritarian ideology.

It is for the wellbeing and security of those of my fellow Indians, who are affected and who I care for, that I have voted.