A confederacy of crooks

Kidnapping, bribery, death threats and worse have been employed in this ugly election. 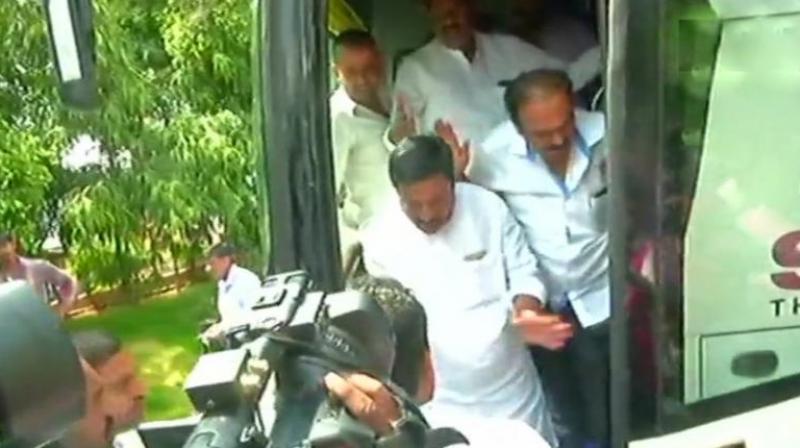 Driving up to the foothills of the mighty Himalayas, I started a conversation with my turbaned, handsome driver from Tehri Garhwal. Karnataka was going to the polls the same day, and there was much chatter across the social media about the outcome. I asked him what he thought was likely to happen. He shrugged, “What can happen? BJP will manage the result somehow and form the government.’’ I smiled and he countered, “Do we have a choice?” That comment, coming from him, led to a longish discussion on why we had come to this stage in India. The road up was rough and under construction. We crossed a bridge over a dry river bed. “It is going to be a difficult summer,” the driver said, looking around at the parched fields. He  told me he earned Rs 10,000 a month, which he was not complaining about. It was the Aadhaar and ATM fee issues that bothered him. But he conceded it would be a good step in the right direction down the line. “My grouse is with all the lies we are told. Just be frank and say we are trying our best. Citizens will understand the problem and not feel angry.” I asked him whether he had ever believed  the promise made by NaMo about Rs 15 lakhs coming into the bank account of citizens once the black money issue was resolved. He laughed out loud. “Are we that gullible? That stupid? I don’t care about all that. I don’t want Rs 15 lakhs or even Rs 15,000 in my account. I just want enough to feed my family and educate my two children.’’ It is a modest, realistic dream. In any other nation, it would be easily achieved. But here in India?

Later the same evening, after I had checked into my beautiful resort, and was looking forward  to a relaxing break, with no television, no  news, nothing but bird songs to soothe my jangled nerves, I heard a man’s rather plaintive voice asking me if I had a problem with the BJP winning in Karnataka. He was from Karnataka. A chartered accountant, he clarified. His wife, who was waiting for my response, introduced herself as a lawyer.

Oh dear! My little holiday was gone right there! I tried to concentrate on my wild mushroom soup. But by then, I had figured I had no choice but to get drawn into Karnataka elections.

The CA announced confidently, “Madam, India is very lucky. The BJP is going to rule for the next 66 years.’’ Why 66? Why not 70? Or 100? He grinned, “Astrologers have predicted.” Okaaaaay!

If , all around me, at that altitude, in those sylvan surroundings, people were happily endorsing a long BJP raj, my best option to hang on to my peace of mind ( I was paying a fat amount for it, after all!) was to change the subject and focus on yogic asanas. This is how it is going to be. And I am so disappointed. Not because of any heightened antipathy towards the BJP ( I feel no differently about the Congress Party), but because of the shocking apathy of citizens. Given the Karnataka circus, and the low levels it has sunk to, no matter which person becomes the CM the appointment will remain suspect and contemptible. Kidnapping, bribery, death threats and worse have been employed in this ugly election. Nobody is surprised! That is the tragedy. We  now expect and accept that our elected representatives will be this neech, this dishonest, this despicable. We take their criminal conduct, criminal records and murder charges in our stride, as if it is really quite all right to have hardened history-sheeters in our state Assemblies and Parliament.

The utter  shamelessness of holding a bunch of spineless, avaricious, venal MLAs inside a  distant resort, and keeping them there till the time comes to prove the numbers on the floor of the House, shows the degradation that has been institutionalised by political parties across the country. Reddy or Yeddy or Siddy or even a Teddy — who the hell cares? There is only one real contest — and that’s between Narendra Modi and Rahul Gandhi. The rest are minor, inconsequential players.

Looming way above even these two main protagonists (NaMo-RaGa)  is the shadowy, sinister figure of Amit Shah. It is he who is  feared. It is he who thrives on generating paranoia. I wonder what has happened to all the gutsy print/TV analysts from an earlier era who used to inform, educate and challenge such leaders and help citizens to make up their minds sans prejudice.

India cannot keep rushing to the learned judges of the Supreme Court each time there is a constitutional crisis, and expect them to sacrifice precious sleep.  This is absurd!

Karnataka is being used as a litmus test by both the parties. Whatever happens next should not be taken seriously at all. It is evident to all that big, big money is being poured into the state and the usual horse-trading is happening on a war footing. But the point is, even when citizens are fully aware of the behind-the-scenes manipulation, why aren’t they protesting? And insisting on an upfront, honourable resolution to the current crisis? Why don’t they declare they will not accept the decision of the governor under such dodgy circumstances? Why can’t they storm the resort where the MLAs are being “hosted” and expose this dirty game?

Come on, Karnataka — lead the way. You still have time on your side. If enough voices are raised and politicians confronted, perhaps this election will have served a purpose in the long run. Citizens have voted. They have asserted their democratic right. The same right is being blatantly abused and insulted. Why bother with an election at all, if this is the outcome? Citizens are deeply wounded because they are being openly ridiculed and mocked by politicians who have converted yet one more election into an absolute farce. But wait! There is an amusing side-show happening in another part of the world.  While we tear our hair out in frustration, our former British masters will soon be celebrating a “royal wedding” in England. Mid-summer madness in fabulous frocks! Who cares what happens in Namma Bengaluru? Ummmm. We do! We must! But hey....congratulations, Harry-Meghan (Haghan?), anyway. And Shaadi Mubarak!