Of matters naval and geopolitical: India, Russia and United States

India’s ability and intent to operate beyond the Indian Ocean region is a non-issue. 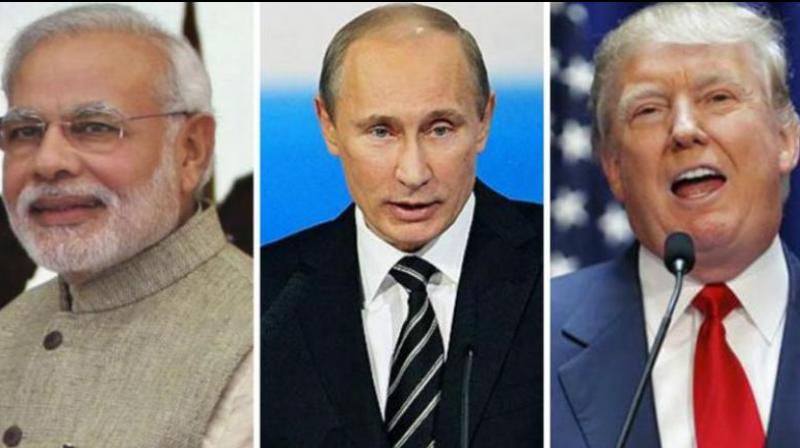 The first point that immediately came to mind is why there should be a “US threat” at all if Russia helps this country to build two stealth frigates in Goa? A fresh “lease agreement” now nee-ds to be put in place for (potential, imaginary or real) violations of an American law, CAATSA, by India.

This recent newspaper headline gave an eerie feeling: “Russia to help build two stealth frigates in Goa; US threat ignored for $500 million tech-transfer deal”. The first point that immediately came to mind is why there should be a “US threat” at all if Russia helps this country to build two stealth frigates in Goa? A fresh “lease agreement” now needs to be put in place for (potential, imaginary or real) violations of an American law, CAATSA (Countering America’s Adversaries through Sanctions Act), by India. This law seeks to prevent countries from buying Russian weapons.

What right does Washington really have, under international law, to put roadblocks in the way of a defence agreement between two sovereign nations, Russia and India? There is a 50-year-old history of defence deals between India and Russia, and while it is true that there have been considerable military sales of American weapons and equipment to India in recent years, it does not simply go that long back. And particularly so in naval matters.

There are good reasons for this, and these have a lot to do with history, geography and economics. The Navy implies high-tech machines. Naval ship construction costs millions — in fact billions — of dollars, takes years to commission, is complex to operate, and requires highly skilled and trained personnel — in the hundreds aflat and in thousands ashore.

Since the early 19th century, for almost every major power, the Navy has been the principal tool to project power overseas, to protect the sea lanes and secure trade routes. The Navy has been — and still is — the most powerful and visible tool of a nation’s flag, its foreign relations, trade, influence and its dealings with both friend and foe. It’s a tool to which every nation aspires, but few succeed, in deploying, possessing and owning at exorbitant cost. It may thus be interesting to map the American contributions, if any, to independent India’s naval inventory following the Second World War.

In between, however, entered ships from the Soviet Union’s shipyards into the Indian Navy, owing to the consistent implied unease of the West towards India’s defence preparedness and intermittent wars — 1947-1949 (with Pakistan), 1961 (Portugal), 1962 (China), 1965 (Pakistan) and again 1971 (Pakistan). The “rise” of a Third World former colony was clearly a cause for concern for the Western ruling class. The foundations of history, geography and economics laid by the West “should not be disturbed”, or remade, by lesser mortals of the 20th century! Or so it was felt in London, Washington and other capitals.

Nevertheless, to the dismay of a section of the West, the first Soviet-made Foxtrot class submarine entered the Indian fleet on July 16, 1968 along with several “Nanuchka” class corvettes, “Osa” class fast attack craft and “Natya” class minesweepers.

By the late 1980s (on the eve of the defeat and retreat of the Soviet Army from Afghanistan; the imminent demise of the mighty Soviet Union and the fall of the Berlin Wall), the defence bonds between New Delhi and Moscow had strengthened to an unprecedented level. The Indian fleet possessed one Soviet-made nuclear-powered and 11 diesel-electric subs; five Kashin class destroyers; eight Petya frigates; and several Nanuchka and Tarantul class corvettes. There were also British vessels, but their numbers were on the wane: Two aircraft carriers, the Vikrant and Virat; and four vintage Whitby and Leopard class frigates.

Significantly, however, there wasn’t a single American-made combat ship in the Indian naval inventory till then.

It was only on January 17, 2007, that a red-letter day arrived for the US administration as it managed to make forays into India’s naval market with a “hot transfer” of the 17,521-ton (full load) Austin class “amphibious transport dock” USS Trenton, which was later formally commissioned on June 22, 2007 into the Indian Navy, rechristened Jalashwa, and based at Vishakhapatnam. Although there emerged another possibility of a second ship (from Nashville) being commissioned; it fizzled out. The Trenton, therefore, is still the sole US-made major surface ship with the Indian Navy, its old-age related problems (having been built in May 1971 by Lockheed SB & Construction Co), of poor serviceability, high maintenance costs, scarce spare parts and operational readiness issues notwithstanding.

In this background, can it be a surprise if Indo-Russian naval cooperation continues unabated? India’s use of the Russian-designed and constructed ships go back four decades as Soviet/Russian vessels have proved extremely efficient, sturdy and effective in trying situations. Hence, it would be advisable for the United States to go too deeply into this matter, its reported deep interest in India’s indigenous aircraft carrier-building and deck-operated, carrier-borne aircraft programme notwithstanding. The US is indisputably the most powerful global military machine, but there is a need for a balanced and nuanced approach too, especially towards friends like India, which does not behave like either China or Pakistan, who have been troubling the no end for a long time. The US operates across the globe, in which are included all three oceans — the Pacific, Atlantic and Indian Ocean. In contrast, India’s ability and intent to operate beyond the Indian Ocean region remains a non-issue, at least for the time being.
Either way, even if India goes to acquire the ability to operate beyond the Indian Ocean region, its intent is benign. Therefore, Washington need not look negatively at India if New Delhi and Moscow strike a deal for fighting ships. It’s time the United States understands the intricacies of geopolitics in this part of the world — and learns that closer India-Russia naval cooperation poses no threat to American interests.