Mystic Mantra: Slaying the asuras within us

The major difference between Ravana and Rama was the former’s ego of his penance. 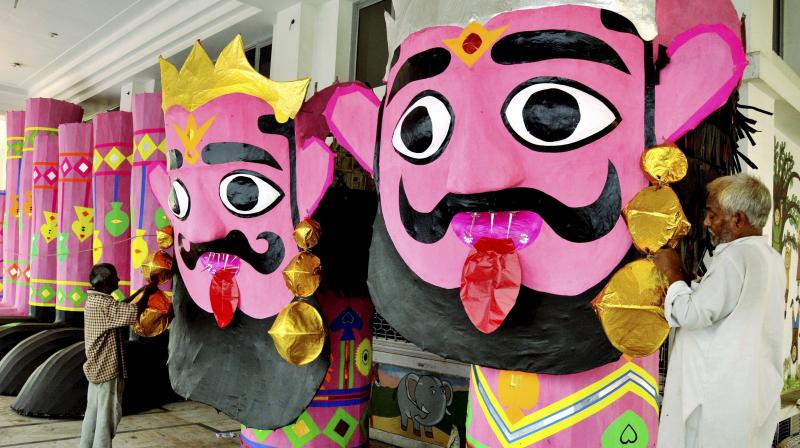 Dussehra” as a word is fusion of “dasha”, meaning conditions or circumstances and “hara”, which means to win over. One that is capable of winning over or turning around his ill fate by remaining positive irrespective of situations in his life or by becoming completely condition less, is worthy of celebrating Dussehra. Avatars of Durga and Rama are worshipped on this day, as they symbolise the slaying of the asura aspect or negatives within us by our own positive side. These stories are not merely to be passed down to generations, but are meant to evolve us spiritually on an individual level. Even after Rama killed Ravana, asuras continued to exist. This construes that winning over just one negative aspect will not end the origin of our negative side, but will have to be monitored regularly for it to end completely. And this can be learnt from such narratives.

The major difference between Ravana and Rama was the former’s ego of his penance. It is known that Ravana during his severe penance had beheaded himself 10 times to please Lord Shiva. But this only increased his ego. This teaches us that if meditating a lot or becoming experts of scriptures or mastering written knowledge does not help in dissolving our ego then it is definitely increasing it. And increase of our ego, will only result in our destruction. Rama, on the other hand had not done any penance. He surrendered to his guru and imbibed the pure gyana in his behaviour, which helped him get rid of his ego. Relieving ourselves of ego is relieving ourselves of the Ravana in us and invokes the Rama within us.

Rama, being the incarnation, could’ve easily killed Ravana in one strike. But instead he first targeted Ravana’s heads. Ravana’s 10 heads could be understood as personification of 10 major negatives we carry, namely, jealousy, hatred, desire, anger, greed, comparison, fear, attachment, pride and violence. But the base of all these was his ego of existence. Rama attacked the heads, beheaded Ravana numerous times but had to strike his ego of existence, in his chita (heart) to end Ravana. Here we can understand that to evolve spiritually, working on getting rid of our various negative aspects will lengthen the process. Instead one can work on detaching from their ego of existence, by surrendering it to a guru to liberate swiftly. Surrendering our ego of existence will quicken our shift of “I” from physical to divine. Once the shift is made, all that will be left will be pure consciousness.

Ravana was a gyani. In spite of all negatives, he was filled with pure gyan. He just let his ego overshadow his positive side, his gyan, his devotion and his ardent penance. Ego is the biggest impediment in our success, happiness and spiritual evolution. When Ravana was on the verge of dying, Rama asked Lakshmana to urge Ravana to bestow him with some gyan. Here Ravana, who had abducted Rama’s wife, who was an opponent and was responsible for deaths of countless people, was still considered worthy of bestowing gyan by Lord Rama himself. And Rama was meant to have killed Ravana’s ego and not just the physical Ravana. Rama teaches us that it may be okay to dislike the actions of a person, but it is not okay to dislike the person. As there is always a possibility of someone’s actions changing with time. Then disliking him would deprive us of good moments with that person. Instead one has to exhibit patience and love for the other person to help him change quickly.