Moon wins as Koreans back his strategy to tackle Covid-19

South Korea's coronavirus strategy has been widely praised by experts as well as WHO for being prompt, nationwide, clear and effective 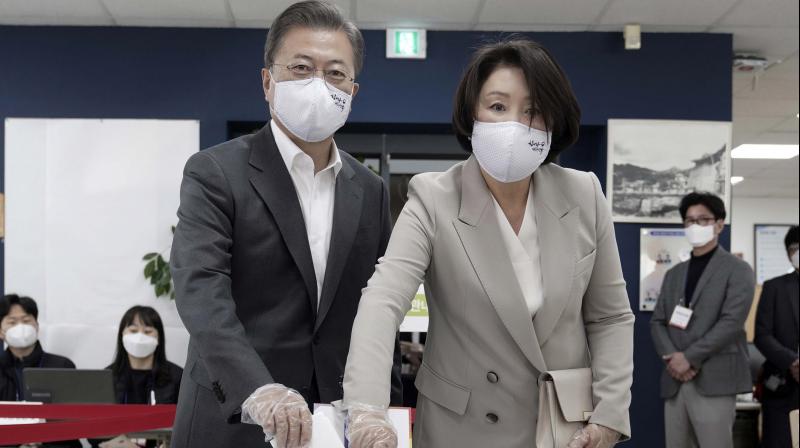 Wearing face masks to help protect against the spread of the new coronavirus, South Korean president Moon Jae-in (left) and his wife Kim Jung-sook pose as they cast their votes in the election at a polling station in Seoul, South Korea on April 10, 2020. (AP)

In South Korea’s parliamentary elections earlier this week, controversially held amid the coronavirus restrictions, president Moon Jae-in’s Democratic Party won a decisive victory with 163 seats in the 300-member legislature, while its ally Platform Party won another 17 seats, giving the ruling side a comfortable majority of 180 seats.

South Korea has a multitude of political parties based on ideology, region and personalities. The names of the parties also keep changing with factions leaving and forming new political groupings. In this election 35 political parties had participated, but the main contest was between the left-of-centre Democratic Party and the more anti-North Korea and pro-industry United Future Party. In the last election in 2016, no party had a clear majority with the DP having 122 and United Future Party 123 seats.

This year’s election saw a turnout of 66.2 per cent, the highest in 28 years for a parliamentary election. This indicates that South Koreans accept all the precautions against the virus regarding social distancing, but are not unduly scared of going out to perform their civic duties.

The DP’s victory is being interpreted as a clear endorsement of president Moon’s leadership in effectively combating the Covid-19 crisis. South Korea was one of the first countries affected by this deadly virus, which is not surprising given its massive tourism and business traffic with China. But the South Korean strategy of diagnosing and tracking infected individuals, massive testing, effective isolation of contacts and prompt quarantine and treatment led to the rapid containment of the epidemic. In fact, the South Korean strategy has been widely praised by experts as well as the WHO for being prompt, nationwide, clear and effective.

South Korea was successful in flattening the curve of Covid-19 cases by March 15 without a full and strict lockdown. With about 10,000 cases, it has been the most successful, among the 10 most affected countries, in controlling the pandemic. The emphasis was on large-scale testing of possible “contact” cases after the identification of the members of the “Shinchionjee” Church as the primary source of infection. In mid-January itself the health authorities, R&D institutions and the pharma industry were mobilised to produce massive quantities of test kits and other equipment. The testing was aggressive and with a population of 50 million, South Korea conducted more than 18,000 tests a day. In comparison, in India, after a slow start, we are doing about 15,000 tests a day. Also, in South Korea, there are 650 testing centres nationwide where anybody can get tested within minutes and receive the result by SMS the very next day. Consequently, South Korea, along with Singapore and Hong Kong, was able to keep most factories, shopping malls and even restaurants open. The loss of jobs and disruption in daily life of ordinary people was thus minimal.

Using artificial intelligence and its high Internet penetration, South Korea analysed on real-time basis data from mobile phones, credit card transactions and surveillance cameras to map the movements and contacts of actual and suspect virus carriers. The persons identified as having been exposed to a carrier were quickly tested and quarantined. South Korea’s ambassador to India Shin Bong-kil has called it the “Trace-Test-Treat” strategy. On April 9, Prime Minister Narendra Modi and President Moon Jae-in had discussed ways to tackle the pandemic. Mr Modi appreciated the technology-based response deployed in that country for managing the crisis. President Moon appreciated the way India has motivated its vast population to fight the pandemic with unity of purpose.

After consistently high approval ratings since his election, president Moon’s ratings had slipped below 50 per cent last year due to the apparent impasse in his accommodative North Korea policy and the sluggish South Korean economy. However, now his approval rating is over 52 per cent after being in the 45-47 per cent range for a long time.

In times of crisis it is normal for people to look for strong and effective leadership. In general, the citizenry at large tends to rally around a national leader if  that leader is seen to be credible, objective and decisive. However, eventually it is the outcome that matters. For president Moon Jae-in, the strategy to combat Covid-19 has worked both in a positive outcome and in public perception. In contrast, US president Donald Trump’s attempts to win the perception battle for his re-election as the outcome of his cynical and foot-dragging approach has been dismal for the American people.