Teachers must have their antennae up at all times and they must remember that punishing the bully is not the solution. 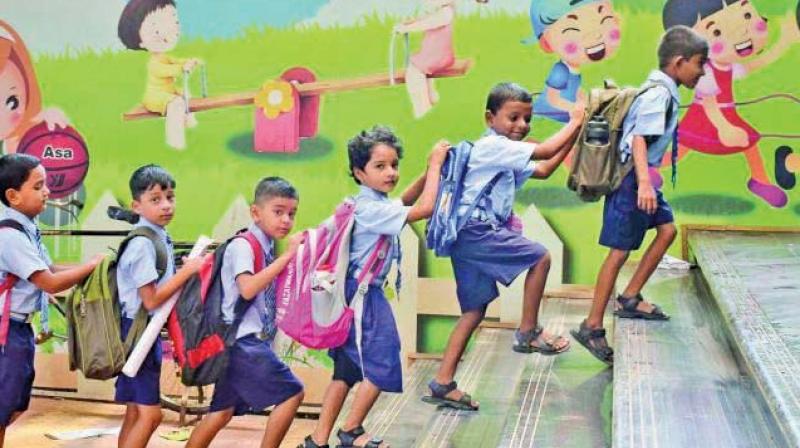 Bullying has always taken place among schoolchildren but in the last few years it has taken dangerous proportions. (Representational image)

Last month I read a chilling report in one of the national newspapers about a bullying incident in a Dehra Dun school. Briefly, what happened was that one of the boys in a group had been caught stealing biscuits and as punishment the entire group had not been not permitted to go on an outing that had been planned for them. This enraged the other boys so much that two of them decided to teach him a lesson. The boy was beaten with a cricket bat and a stump and left abandoned in the deserted study hall. When he was ultimately discovered and taken to hospital, it was too late. But the gruesome story doesn’t end here. The boy’s father was told that his son had died of food poisoning and was not even allowed to see the child’s body. It was reported that the body was ultimately dug up from the school grounds where it had been buried by the school authorities. This macabre story should sound warning bells throughout our country. Bullying has always taken place among schoolchildren but in the last few years it has taken dangerous proportions.

Psychologists cite all kinds of reasons for bullying. And all teacher training courses have a section on the causes, consequences and prevention of bullying. However, in reality, it is not at all easy for teachers to deal with bullying. For example, there are instances of subtle bullying that cannot be identified easily, nor can the perpetrators be brought to task when they are identified for various reasons. Unfortunately, even serious cases of bullying go unaddressed simply because victims as well as witnesses are too scared to complain to the authorities.

It has been observed by experts that children with troubled or dysfunctional homes and those who do not have a warm and loving environment are more prone to bullying. If their parents and elders use force and violence to extract obedience and compliance from them and other members of the family, they in turn learn to model their behaviour on what they witness at home. This phenomenon can perhaps be extended to include models from films, television, the print media and real-life political leaders. Bullying has become such a common weapon for most politicians that it is not just rivals but the minority, the suppressed classes and indeed anyone who dares to criticise them, become the objects of their bullying and threats. Moreover, through the ages, history has witnessed that powerful nations have always bullied smaller and weaker ones. Therefore, even outside of the home, the potential bully has plenty of models to emulate. To be honest, even teachers and the school authorities can be bullies too. In the guise of instilling discipline in their students, a perverse satisfaction is derived from teaching troublesome children a “fitting lesson”.

Another reason for bullying — and usually bullies don’t pick people their size — is low self-esteem as a result of consistent “non-achievement” in school. Strangely, anxiety and stress too can lead to aggressive behaviour. Jealousy, envy and rivalry — all contribute to the desire to hurt those who are achievers and those who are perceived as the teachers’ pets.

Then there are “in-groups” and “out-groups”. There is bullying over differences in culture and class, over food habits, lifestyle, language and religion. Throughout India, we have instances of regionalism and casteism as well as prejudice against dark skin. All in all, it is widely recognised that “bullies are not born — they are raised”. Since genetics has nothing to do with a bullying propensity, all schools must not only root this evil out on a war footing but also take urgent steps to prevent this social evil.

As mentioned earlier, the prevention of bullying in school is not easy. First, it requires the active support of parents. Unfortunately, these days, parents too have become overly protective towards their offspring. Besides, in many cases, if the parents happen to be rich and powerful and therefore influential, they suffer from a condition called “a sense of entitlement” and this is passed on to their progeny. In such cases it is doubly hard to discipline the bully in question.

Since cases of bullying are seldom reported because of fear, it is all the more necessary for every school to be alert and look out for acts of bullying. It has to be kept in mind that verbal bullying can be as harmful as physical abuse. Sometimes sophisticated verbal teasing in the form of sarcasm and innuendoes is hard to detect and yet can be extremely damaging. To add to our woes, now we have cyber bullying to contend with. Children are deeply affected by trolling and the spreading of malicious rumours through the social media but feel quite helpless and inadequate to deal with these invisible forces.

Every school must have a practical anti-bullying policy in place. Teachers must have their antennae up at all times and they must remember that punishing the bully is not the solution. No doubt, all bullies must face the consequences of their actions, but they are not transformed through such an exercise alone. Bullies have to be shown why bullying is unacceptable and they have to be taught to be empathetic. But sadly, we teachers often discover that bullies have not known warmth and love and compassion themselves, and that they have been exposed to undesirable adult models. Thus they need to be understood and handled with sensitivity.

We must recognise that we are in the midst of a social crisis which has nothing to do with poor exam results, lack of academic ability or shortage of talent in sports and co-curricular activities. Unless all of us who are in school education do something immediately to root out this all-pervasive social evil of bullying and take steps to prevent its spread, we will not be able to cure our society that is becoming sicker with every passing day.