The mysteries of Christianity revolve around women. 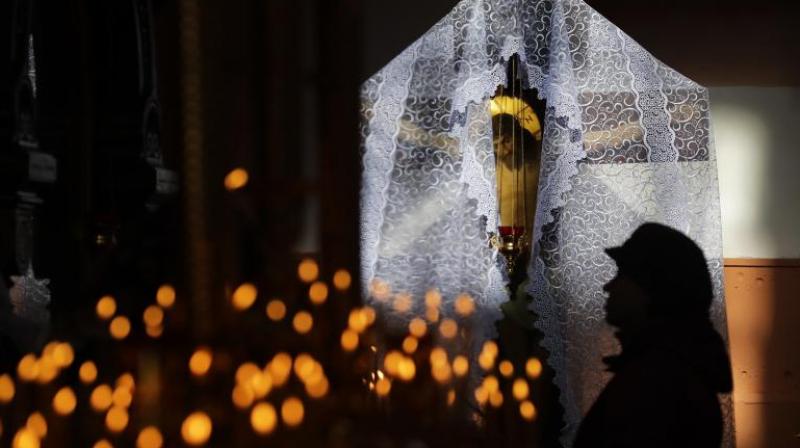 The crucifix is illuminated by sunlight as woman prays during a service on the eve of Easter. (Photo: AP)

The core of Christianity lies in the death and resurrection of Jesus Christ. It may surprise many that women were chosen to convey this important message that the Lord has risen from the dead on Easter Sunday. All four gospels — that of Mark, Luke, Mathew and John – state this although the number of women present varies. But it is generally believed that there were three women — Mary Magdalene, Mary, the wife of Cleopus (believed to be sister of Jesus’ mother Mary) and Mary Salome. (“Mary” seems to a common name among the Jewish people at that time.)

They had set out at dawn with spices and perfume to anoint the body of the crucified Christ that was laid in the tomb on Friday evening in great haste as the sun was setting and the next day was Sabbath (the holy day for the Jewish people) when no activity was possible. But when they reached they found the tomb empty and an angel in a white robe sitting at the head of the tomb conveyed them the message that Christ has risen from the dead. The women were asked to carry this important message of Christianity to the apostles huddled together in a closed room.

In fact, when Jesus was arrested in the Garden of Gethsemane, on the night of the Last Supper, the apostles had fled. It was a small group of women disciples, who followed Jesus on his agonising last journey, to the mount of Calvary, carrying the cross on which he was to be hanged and he acknowledged their presence. When Veronica braved the Roman soldiers to come forward and offer a napkin to wipe his bloodstained face, Jesus rewarded her by leaving his image upon the napkin and immortalised her.

The three women who visited the tomb on Easter Sunday were also present at the crucifixion along with Mary, the mother of Jesus, to console her in her hour of grief as she received the dead body of her son. Mary was also the first person chosen to be informed that Jesus will be born and it was she who held the newborn infant in her arms.

The mysteries of Christianity revolve around women. They have played an important role in the public life of Christ. They were the fearless disciples who followed Jesus till the very end. Defying the Jewish tradition, he acknowledged their presence and addressed them in public gatherings. The Bible has several narratives of Jesus’ interaction with women — the most important of all was the adulterous woman who was brought to be flogged to death as per the Jewish custom. Here Jesus gave his most famous message of kindness and compassion: “The one who has not sinned, cast the first stone”.

There is also the story of unflinching faith of the woman who was ailing, who amidst the jostling crowd touched Jesus’ garments and was healed. Jesus turned around and asked her to identify her and then told her: “Oh woman of great faith, your faith has healed you”.

Though women played an important part in spreading the message of gospel in the first century, as Christianity grew and spread to Asia and Europe and became an important political force, the patriarchal bias set in and women were relegated to a subordinate role. The Jewish notion of women as impure was carried forward into the new Christian faith, and women were excluded from some of the important Christian rituals.

Even today, the power and authority of the church lies with the male religious heads, while women play an important but subordinate role of service to the community.

The present pontiff, Pope Francis, has tried to loosen the grip of patriarchal orthodoxy by setting an example. Within a few days of his election as the supreme pontiff of Roman Catholics, on March 13, 2013, he broke new ground by travelling to a youth detention centre in Rome for the traditional Last Supper Mass on Holy Thursday, where for the first time women and Muslims were among those whose feet he washed, reflective of the humility and spirit of service which Christ had displayed when he washed the feet of his apostles during the last supper on the night before his crucifixion. Since then the pontiff has religiously followed this tradition every year, loosening the knot of patriarchal, class and community biases which had gripped the conservative Roman Catholic Church. Among the people whose feet he was washed were refugees, including Muslims, Hindus and Coptic Orthodox men and women. Going beyond personal convictions, through a papal decree he gave the message of inclusion of women in this important ritual.

Despite this, change is difficult to come by and there has been a great deal of resistance to incorporate the change within church rituals. Last year, a few parishes in Mumbai included women and this year more were to follow. But the public statement by two Eastern churches, the Syro-Malabar Church and the Syro-Malankara Church of Kerala, that they will be following the tradition of exclusion of women has come as a dampener.

But interestingly women have taken on the challenge, and have organised their own feet-washing ceremonies at various public places. A group in Kottayam, Kerala, Women’s Lives Matter, celebrated the feet washing ceremony with the inmates of the Swanthanam Centre for battered Women and children on April 11, 2017, two days prior to the day marked for the celebrations. Another group of women in Thrissur included transgender people in the feet-washing ceremony.

Symbolic though these initiatives may seem, they must be viewed as acts of assertion and a clear sign of the winds of change blowing within the tradition-bound Catholic churches.