The new system has not only helped officials to get rid of pending grievances instantly but also saved their time. 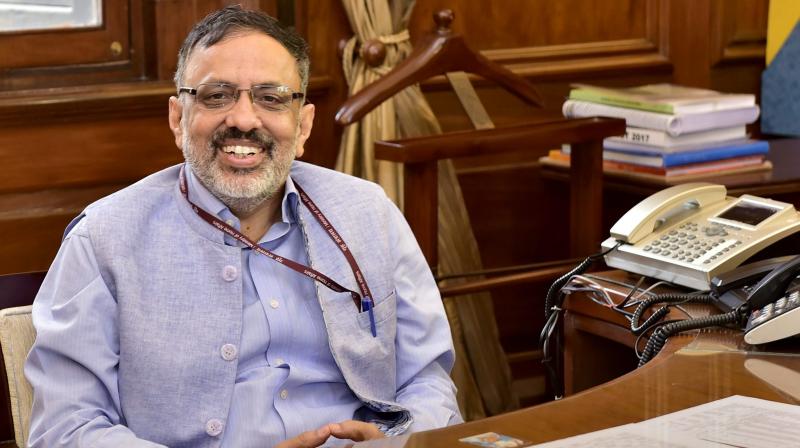 Telangana chief secretary S.P. Singh has come to the rescue of all busy IAS officials working in the districts. The bureaucrats were provided an online facility for official communication, an arrangement that does not require them to come all the way to Hyderabad to meet him personally for any official duties.

In tune with Mr Singh’s initiative, the state government launched a special website in which the IAS officials posted anywhere in the state can upload their leave forms and encashment applications. The chief secretary’s nod, or otherwise, is posted online immediately. This has brought in an overwhelming “positive” response from officials as it would ease their burden to huge levels.

The new system has not only helped officials to get rid of pending grievances instantly but also saved their time. As the Telangana government has introduced several schemes, the district officials now have more time to address them.

This is for the first time that such financial powers have been given to joint secretaries to bring greater flexibility in operations, reduce delays and facilitate quick decision on matters involving financial expenditure, according to Union home secretary Rajiv Gauba.

There are around 20 joint secretaries in the home ministry handling different divisions, and the financial powers have been given to them for the first time.

Besides the officers have been given full financial powers for hiring of accommodation, fund release under approved schemes, payment of spectrum charges under approved activities, all types of time-barred claims of leave travel concession, medical, transfer allowance and travelling allowance.

All approvals for going abroad for personal reasons, leave of any kind, tours and trainings of any kind in case of Group C and Group B employees will be approved at the level of joint secretary.

PM modi amends service rules
The Centre has changed the service rules to make it easy for married IAS and IPS officers to get the same cadre state. According to sources, Prime Minister Narendra Modi took special initiatives to get the existing rules amended.

The issue originated in a unique case that cropped up in February 2016 in which the government found it difficult to accord inter-cadre transfer of P. Parthiban, a 2011 batch AGMUT cadre IAS and his wife Nisha, 2011 batch IPS, to a common cadre on grounds of marriage. Usually, officers belonging to all India services manage inter-cadre transfers on grounds of marriage. But in case of the Parthiban couple, the problem arose because Mr Parthiban could not be placed in Tamil Nadu cadre where Nisha was working, as Tamil Nadu happened to be his home cadre. And similarly, Nisha could not be transferred to her husband’s cadre AGMUT, as she belongs to Delhi, which is a part of the AGMUT cadre.

So, when this unique case came up before a panel headed by then DoPT secretary Sanjay Kothari, he did not take the final call. Instead, he decided to put up the proposal for seeking the approval of the Appointments Committee of the Cabinet headed by the Prime Minister.

Now the new policy says that if either of the officers cannot opt for the cadre of the spouse (because they are respective home cadres), they may choose the immediate next cadre opted by them. And in case of non-receipt of preference within the stipulated time from the officers concerned, they will be assigned the most deficit cadre.