Choices for governor: Constitution or ideology

Not to take chances, and to armtwist the governor, the BJP central leadership has despatched a clutch of ministers to Bengaluru. 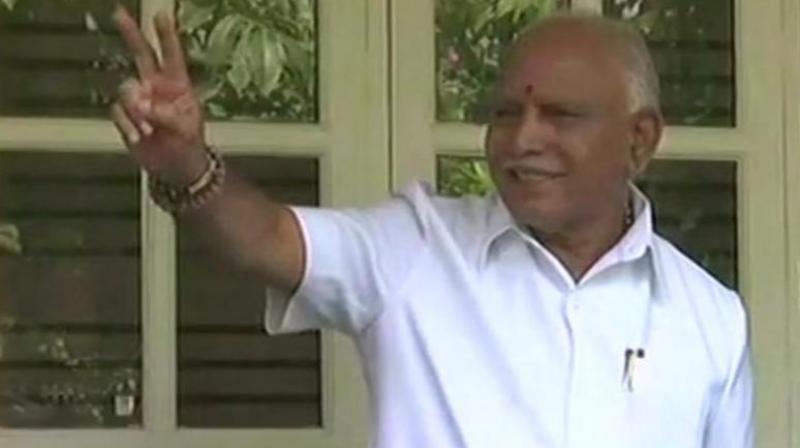 If it had, the saffron party would not now be running around trying to buy MLAs and break parties in order to shore up Mr Yeddyurappa’s chances. (Photo: ANI | Twitter)

When RSS morality and political practices are running rampant, it is futile to expect fair play or the observance of norms that ordinarily guide us to do the decent thing. It is therefore reasonably safe to assume that Karnataka governor Vajubhai Vala will do the wrong thing in making his judgment on who to call first to form a stable government when no party has won the election and there is a hung verdict.

With eyes wide open, and knowing full well that the BJP can only produce the numbers on the floor of the Assembly by breaking other parties or buying their MLAs, Mr Vala may be expected to allow state BJP leader B.S. Yeddyurappa the first opportunity to form a government after the just-concluded election process.

He is likely to do so knowing full well that if the Congress- JD(S) post-poll arrangement were to be given the first shot at government-making, the exercise will entail no horse-trading and corrupt practices, and the chances of the state having a stable government are far greater than if the BJP were given the first try.

On the other hand, the governor, if he remains true to his ideological anchorage and is motivated to advance RSS-BJP interests at the expense of constitutional norms, will be entrenching inbuilt instability into the political system of the state of which he has been nominated to be the constitutional head by the Narendra Modi government. It is to be seen if he will be deterred.

Since our system is based on the Westminster model, we should be aware that since the 19th century, after an election, the monarch has invited that leader to be Prime Minister who was reasonably expected to provide a stable government.  In the present instance, Mr Vala is expected to invite a leader whose term will begin with breaking parties through the use of unsavoury and criminal means, and thus with instability writ large on the canvas.

If Mr Vala can prove us wrong, he is a better man than this writer has given him credit for. But, in that event, the octogenarian must be prepared to be humiliated and sacked by the Narendra Modi government and also suffer a campaign of calumny. Will the governor act so selflessly in the evening of his life? He has been groomed in the RSS way of life and is a founder of the Jan Sangh in his home state Gujarat, where he has held important Cabinet positions, including under Mr Modi, and been Speaker of the Assembly.

Not to take chances, and to armtwist the governor, the BJP central leadership has despatched a clutch of ministers to Bengaluru. To further drive the point home, the party’s president Amit Shah has declared that the BJP has already won the Karnataka election and will win every single election all the way to the next Lok Sabha polls. Woe betide the governor if he does not take note. But, needless to say, there exists an implied threat here.

Nevertheless, the falsity of Mr Shah’s claim is obvious. To begin with, under his hectoring leadership, the BJP has not won the Karnataka election. If it had, the saffron party would not now be running around trying to buy MLAs and break parties in order to shore up Mr Yeddyurappa’s chances.

To add to this, although the Congress lost, it polled a higher percentage of votes than the BJP, and about 50 per cent of its MLAs were re-elected. This suggests that the party’s defeat was not due to anti-incumbency but in keeping with a tradition since 1978 that the state does not elect the same party in consecutive elections.

For the BJP, the hurtful truth is that it had a great chance, but it blew it. The Modi-Shah campaign fell flat because the items this team retails have begun to be discounted since the BJP’s near-defeat in Gujarat late last year in spite of its unfurling of the communal flag.

For all these reasons Mr Shah is angry and makes thoroughly unwarranted claims. All the sweetmeat orders for a huge celebration at the BJP’s central office in New Delhi on the day of counting in anticipation of a spectacular victory had to be cancelled. For Mr Shah and Mr Modi, this was stinging public humiliation as the media too had been invited to witness the celebration.

To an onlooker, it was clear that the BJP’s two most significant leaders were not architects of a famous victory, but would soon be called upon to initiate a plot of villainy so that the saffron party may be enabled to form the next government in Bengaluru by hook or by crook.

The governor has a crucial role in this plot. If he can take evasive action, or can stand up to bullying, he will go down in history as a gentleman of worth; if not, he’ll just be one of them.

Since the BJP’s impressive win in 2014, the party won Uttar Pradesh in an equally impressive way early last year. But as for the party’s claims of victories in many other states, these appear to lack authenticity. Rajasthan was won right after the Lok Sabha election but this state too, like Karnataka, is known not to re-elect a party twice in a row. The Modi-Shah duo had lost Bihar, and the energetic campaigning of the Prime Minister miserably failed in Delhi. The saga in Gujarat and Maharashtra has been unprepossessing. The Assam bid succeeded, thanks to the shameless communal campaign and the breaking of disgruntled Congressmen. In Uttarakhand and Arunachal Pradesh, the BJP misused its power at the Centre to break the ruling party. In the latter, the governor went to the dirty extent of allowing a session of the Assembly at a private conference hall!

There has been a steady display of politics of the kind this country had not known before. In Karnataka, the most recent precedents of Goa, Manipur and Mizoram are being disregarded. The only principle that matters is to keep the Modi-Shah duo in good humour.