Opinion   Oped  17 Mar 2020  The rising China virus threat: For India, a spell of self-isolation is not a bad idea
Opinion, Oped

The rising China virus threat: For India, a spell of self-isolation is not a bad idea

India should never get involved wholeheartedly in the business of globalisation, which has turned out to be a bit of a myth anyway 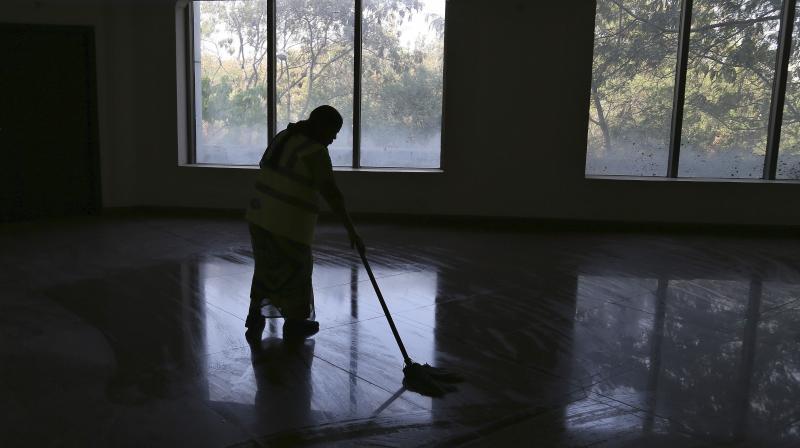 A municipal worker cleans the floor of a room to be used as an isolation ward for coronavirus asymptomatic people at an athletic stadium in Hyderabad, March 17, 2020. (AP)

The 21st century began with China’s economic growth, trade and commerce; accompanied by its impressive financial performance. Beijing got adulation like a rock star cruising through the stratosphere. It was good times all the way, till a mysterious home-grown coronavirus jolted Beijing’s invincibility.

The deadly virus, born in China’s womb, has inflicted an unprecedented global carnage. Beijing thus is the legitimate claimant as producer, distributor and consumer of an undetected killer disease to the globalised “one village” world, posing a dire scenario. At least for now, it threatens the very physical health and peace of mind of the human race.

In fact, things are moving so fast that it’s quite impossible to either state or analyse with clarity the unfolding scenario due to its unpredictable velocity, venom and contamination. It appears like mockery of a surrealist oft-repeated cliche reflected through the title of a book One World, written by Wendell Willkie, the 1940 US presidential candidate. “One” or not, the reality or unreality of “One World” could turn into a mirage.

It raises serious doubts. Is the virus connected with chemical or biological warfare? Is the “China virus” only a virus? There is trepidation in the very thought of certain other possibilities.

The signs of distress, regrettably, were there for all to see. But most people, including Indians, failed to see the writing on the wall, or at least in the global English-language media. Day in and day out, the headlines were ignored or not given due importance; with some Indians even giving commerce, cash and profit precedence over the health of the nation, ignoring the (strategic) danger China’s new virus could pose to 1.3 billion Indians. This writer had spelt out these grave concerns in this newspaper last month (on February 3, February 15).

This writer has always maintained, and still does, that India’s inherent and intentional inability to non-globalise the way some countries do is actually a blessing in disguise. All the more because, as people often forget, India isn’t just a country, but a virtual continent due to its shape, size, variety, variation, diversity and bewildering mixture of extremes, as can possibly be thought of. Hence, the slow, steady, and often-slumbering India constitutes a wonder as to how it continues with nonchalance amid the all-round turbulence.

On March 5, another alarm bell: “IMF earmarks $50 billion for countries hit by coronavirus as growth forecast cut”. A March 6 report held out a virtual ultimatum: “US hits out over export barriers for coronavirus medical supplies; Germany and Turkey in line of fire; Nation ‘alone’ to face outbreak; WHO urges action”.

Thanks to the inflexible proponents and philosophers of globalisation, the fall of one “strong” player leads to the fall of all. The global village today is really a house of cards. After one strike, health issues have shaken the foundation of the world’s economics, commerce, trade and industry, like a tsunami-cum-earthquake. But there’s another surprise too! Amidst the all-round global fear and tremor (from Iceland to New Zealand; Beijing to Boston; London to Latin America; Moscow to Melbourne), how come India has remained tranquil so long, largely unaffected amidst the poisonous air? Undoubtedly, originating, if not deliberately spread, from the Communist-ruled Mainland China?

Some credit should go to Indians. Their uncanny knack to stay afloat, and away from the world of “vicious and venomous rival camps” still appears to be working. There is also the inherent ability of Indians to sustain their deep-rooted culture, tradition, philosophical foundation. The world may be one metaphysically, but not necessarily physically. One loves one’s friends; but in the international arena, friends and foes are neither permanent nor stable.

External affairs minister S Jaishankar’s March 7 statement said it all. Asked, if India was losing its friends, he responded: “Maybe we are getting to know who our friends really are.”

In this writer’s view, India’s 1.3 billion people should never get involved wholeheartedly in the “business of globalisation”, which has turned out to be a bit of a myth. “Permanent national self-interest” should be India’s motto, not to leap blind into the global cauldron. A tinge of solitude, bordering on self-imposed isolation, will not be a bad idea for attaining self-reliance, and without getting contaminated by the chemical/biological warfare coronavirus.

As India put itself into a virtual quarantine on March 11, the nation’s economy clearly appears to be on the precipice.