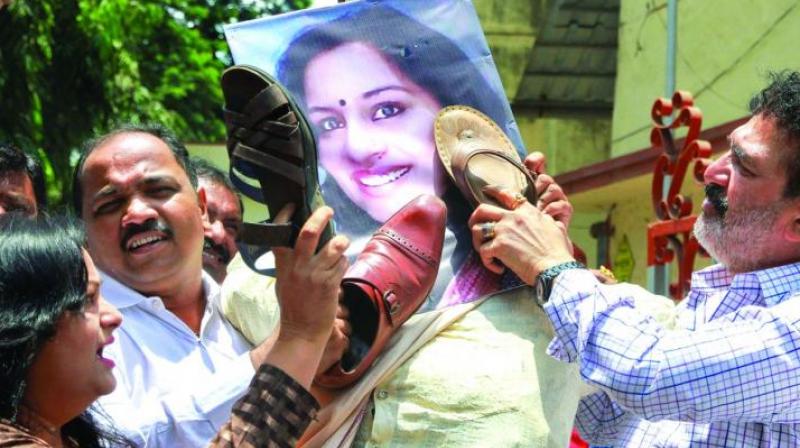 Congress activists beat a poster of BMC officer Nidhi Choudhari as they protest her controversial tweet on Mahatma Gandhi, in Thane on Monday. (Photo: AP)

A carelessly worded tweet has landed Maharashtra IAS officer Nidhi Choudhari’s career in hot water. Posted as joint municipal commissioner of the Greater Mumbai Municipal Corporation, she has been transferred as deputy secretary in the water supply department.

The tweet in question was about Mahatma Gandhi and his approaching 150th birth anniversary celebrations in the context of the rise of hyper-nationalism. It was seen as derogatory to the Father of the Nation, and Ms Choudhari faced a severe backlash on social media. Even Opposition parties demanded “exemplary” action against the babu. Ms Choudhari’s denial that her tweet was “sarcastic” was lost in the din, especially on social media platforms where rhetoric scores far more than nuanced communication. Though the IAS officer immediately deleted the tweet, it has not stopped the Maharashtra government from seeking an explanation from the babu over the derogatory tweet. A show-cause notice has now been issued. Though some retired and serving IAS officers have sought to defend her, claiming that she could never insult Gandhiji, this has failed to cut any ice with the state government.

Among the first decisions of the Modi 2.0 sarkar was to extend the Prime Minister’s Scholarship Scheme to children of police personnel who are killed in Naxalite or terrorist attacks. Earlier, it was restricted to wards of military and paramilitary personnel as well as railway forces. While the IPS Association has welcomed the decision, one service is feeling particularly left out.

Indian Forest Service (IFS) officers have demanded that the scheme be expanded to include children of forest personnel who are killed in the line of duty.
The demand has found traction in social media, with many people coming out in support of forest officials.

Forest officials maintain that their jobs entail a lot of risks, and many lose their lives protecting the forests. Apparently, according to a study by the International Ranger Federation, India was the most dangerous country in the world for forest rangers, accounting for more than 30 per cent of ranger deaths across the world.
As the demand gains momentum, forest officers are hoping for a positive response from the government. But will it?