Persians & the Islamic state of Iran

If there was a survey today in Iran, 80 per cent of people would say they want to follow the Zardushti religion. 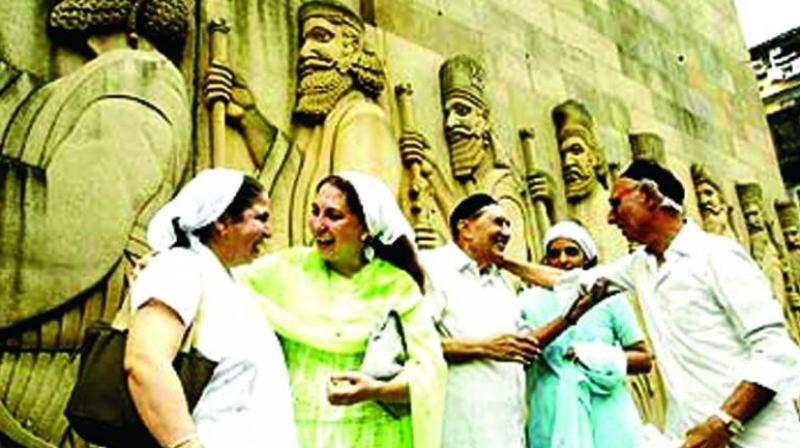 “God nominates some chosen people
And promises them a chunk of land
He impregnates a Jewish virgin
In ways we’ll never understand.

He sends us his commandments
He even dictates books
We dare not call it magic
Though that’s how it all looks.”
From “Waat ee Dees? Komdi ka Pees”  by Bachchoo

Some years ago, being in Toronto, I took the opportunity to visit a cousin who lives there. Toronto is a vast conurbation and I took a taxi back late at night. Less than a minute after we started, the driver, in friendly north- American fashion, asked me “How was your day, bud?” he had a thick accent which I tentatively placed.

I said my day was good and he remarked that my accent was not American. I said it was Indian tinged with British and said why and remarked that his accent wasn’t either.

We were perhaps 10 miles into our journey, making idle chit chat when he asked me my name. When I told him he said “So, you are Muslim?”

“No,” I said, “I’m not,” trying to balance telling the truth against what I thought might give him offence.

“But that is a Muslim name,” he said.

“Well, long before the Muslims adopted it, it was a Persian name – pre the Arab conquest of Iran – 641 AD or so,” I said.

He looked away from the road and at me very curiously.

“So you are not Muslim?”

I couldn’t dodge any further. I said “No, I was born a Zardushti,” using the term he, as an Iranian, would recognise.

He swerved the car to the curb and stopped suddenly. I was, to say the least, bewildered.

He said it was Abdul or Ahmed or something distinctly Muslim.

“But that’s not a Zoroastrian name.”

“No, no, no, I was born Muslim but I believe in “Humata. Hukta, Huvareshta””, he said, the Zoroastrian creed. “What more religion do we need?”

He proceeded to tell me that the conversion of Persia (he insisted on that name though I pointed out that the ancient Zoroastrian Kings had named it “Eran”) to Islam was a tragedy and had to be reversed.

I pointed out that apostasy was considered a capital offence in Islam.

He said he didn’t care as he believed that 80 per cent of the Persian population would embrace Zoroastrianism if they were given a free choice – which I said was not likely. He agreed.

When we got to where I was going, he wouldn’t take the taxi fare.

Years later, last week, I had my haircut at my neighbourhood barber. The establishment is run by Aftab, a young Persian hair-stylist. We make routine conversation. After the normal politeness, we discuss politics and this week, we naturally got on to Trump and his moves towards peace with North Korea.

That’s all very well, said Aftab and proceeded to support Trump’s pronounced aggressive policy towards Iran and the denuclearisation treaty from which the US has withdrawn. Aftab didn’t seem perturbed as my white locks fell like snow upon the cloaking barber-sheet. He said it’s what the mullahs deserve.

“Surely, it’s dangerous for peace in the Middle East and the world?” I said. He said he didn’t care and went on to say that Iran had fought a Shia-Sunni war with Iraq in which he had lost relatives.

Now Israel together with Sunni Saudi Arabia was threatening Shia Iran. The divisions between Shia and Sunni had been the cause of slaughter for hundreds of years. This was barber-shop conversation if a little elevated from descriptions of holidays or condemnation of recent local stabbings in our streets.

Then he said something unexpected. “Islam is an Arab religion,” he said, “and this Sunni-Shia business is something imported from an old Arab dispute. It shouldn’t have anything to do with us Persians. If there was a survey today in Iran, 80 per cent of people would say they want to follow the Zardushti religion.” I said that statistic seemed unlikely to me but he insisted the population was tired of the rule of mullahs.

Suppose, just suppose, that the unlikely and pigs-will-fly contentions of my two informants, the conversations separated by years but both from the mouths of immigrants or exiles from their native Iran/ Persia, are accurate!

And suppose, further, that some revolutionary upheaval in favour of converting whoever wishes to Zoroastrianism takes place in the old country... the hypothesis poses several burning questions.

Will there then come about a “secular” state of Iran with freedom of religious belief, or even a religious Zoroastrian one as were the states of the Achaemenid (“Hakamanyush”, distorted by the Greeks) and Sassanian dynasties?

And will such a new state end all enmity and activity such as the Iranian support for Hamas, Hezbollah and the Houtis? And that nuclear capability?

And the final question: What will the bigots of the Parsi community of India who oppose any conversion to the religion say? Will they oppose the reconversion of Iran to the religion that invented the singular God? Or will they swallow hard, and in chewing their prejudices say that Zoroastrian blood still runs in the veins of the Iranian population, lending a racial justification to the conversion?

Apart from the questions, these conversational observations lead me to a regret. I have, for some time now, wanted to visit or revisit Pasargade and Perseppolis. Perhaps reporting these conversations here will, through the tracking agencies of the current Iranian State, deny me a tourist visa to Persia.

More inhibiting is the thought that they’d grant me a visa and arrest me when I reach Iran, try me and throw me in jail on charge of reporting conversations subversive of the Islamic status quo.

That’s not fantasy. It’s happened to one Nazneen Radcliffe. Look her up and sign the petition!