The privileged sections have shaped a limiting image of Ambedkar 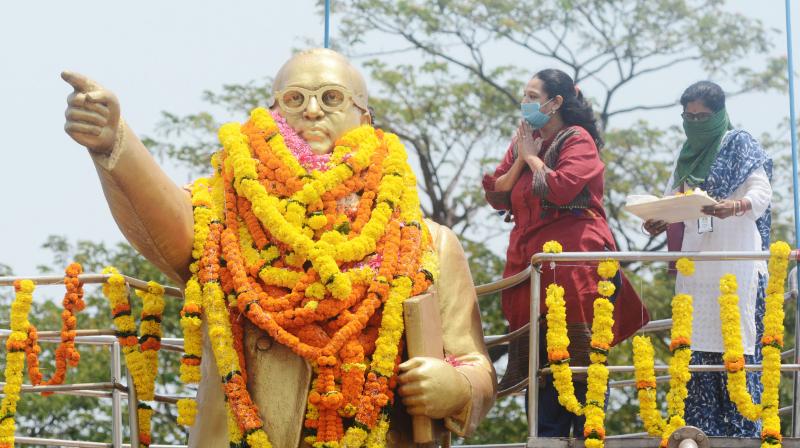 Almost every political party swears by Dr Ambedkar even though the position of Dalits, minorities and other marginalized sections has barely improved since his death. (DC Photo: P Narasimha Murthy)

"If I find the Constitution being misused, I shall be the first to burn it."
-- Dr B R Ambedkar

We are at a juncture when Indian democracy is facing new challenges and threats. These include extreme economic inequality, agrarian distress, violence against marginal groups and religious minorities, particularly Dalits, Muslims and similar others, gender inequality, growing militarism, rampant corruption, expansion of corporate power, resurgence of Hindu majoritarianism, attacks on rationality and scientific spirit, and destruction of the institutions of governance, including the judiciary and Parliament. In this context, it is important to revisit Dr B R Ambedkar’s visionary political and socioeconomic philosophy to understand how the republic is likely to respond to such challenges.

Post-Independence India witnessed some of the biggest communal conflagrations at the national level, the repercussions of which are still being felt and whose perpetrators are still roaming free. We should not forget that they were in fact attacks on the principles of secularism and democracy which form the core values of the Constitution drafted under Dr. Ambedkar's stewardship.

Baba Saheb Ambedkar in Pakistan, or, Partition of India (p.358) warned us that, “If Hindu Raj does become a fact, it will no doubt, be the greatest calamity for this country. Hindu Raj must be prevented at any cost.” He also said, “Indians today are governed by two ideologies. Their political ideal set in the preamble of the Constitution affirms a life of liberty, justice, equality and fraternity whereas their social ideal embedded in their religion denies it to them.”

This prophecy is more evident than ever. The relationship between Ambedkar's philosophy and Hindutva politics has come into sharp focus since 2014. Almost every political party swears by him, even though the position of Dalits, minorities and other marginalized sections has barely improved since his death.

Today, we do need to understand Ambedkar’s role as chairman of the drafting committee of independent India’s Constitution and the skillful manner in which he ‘piloted the draft’ in the Constituent Assembly. But that is not enough. We know very well how during his long political career he provided us a “variety of political and social ideas that fertilised Indian thinking” which greatly contributed to India’s decision to adopt the parliamentary form of democracy. Perhaps more important for the ensuing discussion would be what he meant by and differentiation  between what he called ‘political democracy’ – which he defined as ‘one man one vote’ – and ‘social democracy’ – which according to him was ‘one man with one value’ – and his caution that political democracy built on the divisions, asymmetries, inequalities and exclusions of traditional Indian society would be akin to ‘a palace built on cow dung’.

We also need to take a look at the unfolding scenario in the country today and see whether there is growing dissonance or resonance between how Dr Ambedkar envisaged democracy and the actual situation on the ground. Through this prism we should assess our role in confronting the challenges that lie before us.

While we remember and take stock of the great colossus that Ambedkar was, not for a moment can we forget the mammoth task undertaken by other ‘founding fathers’ – who included the stalwarts of the Independence movement – of the republic. It was this collective that together gave the right to vote to every adult citizen in a country with abject poverty and mass illiteracy. This right to vote had come to many countries of the West after decades of struggle. But the Indian Constitution and fundamental rights were born overshadowed by the bloody Partition riots.

Do the image and memory of Ambedkar, brought to us through textbooks and popularised by the ever-expanding powerful media houses match his actual contributions as a leader, scholar and renaissance thinker?

Just try to imagine out for a moment what sort of image comes to mind when somebody mentions Ambedkar's name: leader of the Dalits, chairman of the drafting committee of the Constitution, man who fought for the rights of the Scheduled Castes, a man who embraced Buddhism with lakhs of followers. With some exceptions, the image of Ambedkar in the public mind does not transcend this range.

The imagery excludes, somehow, the historic Mahad Satyagraha which was organised under his leadership way back in 1927. In Marathi this revolutionary moment has been captured euphemistically thus, ‘when water caught fire’, when it took place at the Chawdar Talab (lake). Nor does this public imagery stretch to include the burning of the Manu Smriti, an act which was compared to the French revolution by Ambedkar. The imagery cleverly excludes any details of the first political party formed under his leadership called the Independent Labour Party, the role of many non-Dalits or even upper castes in the movement led by him or the historic march to the Bombay assembly against the ‘Khotparatha’ where communists participated in equal strength. His historic speech to railway workers in Manmad when Ambedkar asked them to fight the twin enemies of ‘Brahmanism’ and ‘capitalism’ (late 1930s) or his struggle to ensure enactment of the Hindu Code Bill, which ultimately became the reason for his resignation from the Nehru cabinet. All these vivid and critical parts of his stormy life and varied contributions escape popular imagery. There are many others that do not fit in with the overpowering image of a ‘Dalit messiah’.

So, is it really surprising that most Indians know so little of Ambedkar, which is not the case with other great leaders who emerged during the anti-colonial movement?

This selective amnesia about Ambedkar is in large measure due to the way in which the privileged sections, dominated by the upper caste elite, shaped a limiting image of him, albeit in a very surreptitious manner. Others involved in the work of a broader social transformation, which included organisations claiming to be his legatees, also cannot escape blame for the critical silences around his image. These organisations and movements either remained oblivious to the designs of the varna (caste) elite or were not conscious/careful enough to comprehend their game plan.

Any student of politics of the oppressed would know and vouch for the fact that this is the fate of most leaders of the exploited and oppressed, the world over. When they cannot any more be ignored completely, the image that is shaped needs careful scrutiny.

A similar process took place in the United States where a very sanitised image of Martin Luther King, has been popularised. Instead of the MLK who opposed the Vietnam war, looked at capitalism as the source of all evil, who equally struggled for workers’ rights as black rights, we have before us an image of a uni-dimensional King.

As we discuss Ambedkar’s ideas on democracy and their relevance today, this historic task beckons us: we need to fight with all our strength against the ‘reduction’ of his image and what a scholar describes as a deliberate process of ‘mythologizing the man and marginalising his meaning’.

The future of Indian democracy depends to a great deal upon revival of Ambedkar’s visionary conception of democracy with modern modifications.

To Ambedkar, a democracy is more than a form of government. It is primarily a mode of associated living. The roots of democracy are to be searched in the social relationship, in the terms of associated life between the people who form a society.’ And, for him a society is conceived ‘as one by its very nature’ and ‘[T]he qualities which accompany this unity are praiseworthy community of purpose and desire for welfare, loyalty to public ends and mutuality of sympathy and co-operation.’

Then he further discusses how ‘Indian Society is so embedded in the caste system that everything is organized on the basis of caste, and shares examples from the daily life of individuals revolving around the twin concepts of purity and pollution and moves to the sociopolitical arena and wryly concludes that ‘[t]here is no room for the downtrodden and the outcastes in politics, in industry, in commerce, and in education.’

Ambedkar discusses how other special features of the caste system which ‘[h]ave their evil effects and which militate against democracy’ and he focuses on what is called ‘graded inequality’ where ‘castes are not equal in their status’ but rather ‘[a]re standing one above another’ and form ‘an ascending scale of hatred and descending scale of contempt’ which has the most pernicious consequences as ‘[i]t destroys willing and helpful co-operation.’

Then discussing the difference between caste and class, he takes up the second evil effect in the caste system accompanied by inequality which is ‘complete isolation’ which manifests itself in the difference between stimulus and response between two castes which is only ‘one-sided’ and which ‘educates some into masters, educate others into slaves’ and this separation thus ‘prevents social endosmosis’.

And points out the ‘system of graded inequality which is the soul of the caste system’ and also how ‘Indian society is disabled by unity in action by not being able to know what is its common good’ where ‘the mind of the Indians is distracted and misled by false valuations and false perspectives’ and ends his speech by emphasising that mere education cannot destroy caste system rather education to those ‘[w]ho want to keep up the caste system is not to improve the prospect of democracy in India but to put our democracy in India in greater jeopardy.’

Ambedkar’s conception is geared to social transformation and human progress and he defines it as ‘a form and a method of government whereby revolutionary changes in the economic and social life of the people are brought about without bloodshed.’

We salute the contribution of this great visionary leader of the downtrodden who not only fought for political revolution but equally for a social revolution in modern India. While looking at the social health of India, one only wonders if it is willing to share some space with fellows who it will considers as others, yes, wretched others.