Without his racism and controversial worldviews, there is no Naipaul art

C P Surendran
The writer is a poet, novelist and journalist based in New Delhi, and his latest collection of poems is Available Light.

That dark ink which flowed in his veins sprung from the sad, inescapable whiteness of the universe, the sad, sad fixities of human nature. 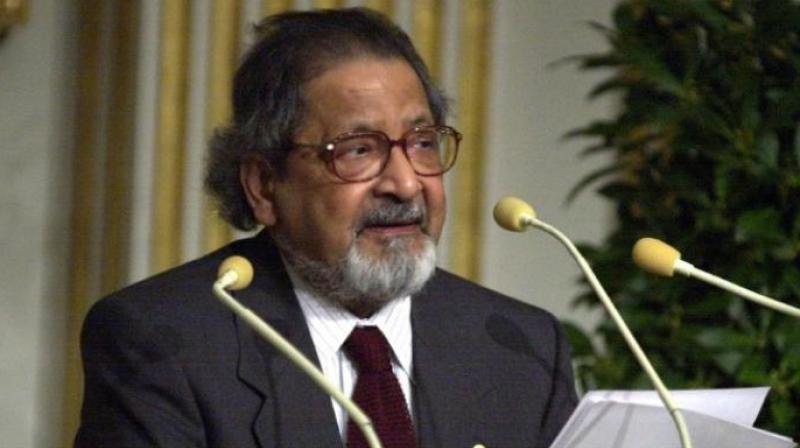 V.S. Naipaul died last weekend. The articulate, liberal social media has not mourned the passing with the usual celebratory fervour. This is because Naipaul does not lend himself to easy appropriation. Consider a quote attributed to him: “if a writer doesn’t generate hostility, he is dead”.

Often one’s weaknesses are a source of one’s creativity.

On a good day, Naipaul might have been fathered by Rudyard Kipling. No other major writer in recent times bought into the mythologies — and no mythology is free of a modicum of truth — of the white man’s burden, as defined in The White Man’s Burden: The United States and the Philippine Islands (1899), a poem about the Philippines-American War (1899-1902), in which Kipling invites the United States to take control of that country. Which, for all the outrage and liberal rant and changing presidencies over the decades, the US has faithfully carried out to date, with the covert consent of all the civilised white states:

“Take up the White Man’s burden —
Send forth the best ye breed —
Go bind your sons to exile
To serve your captives’ need;
To wait in heavy harness,
On fluttered folk and wild —
Your new-caught, sullen peoples,
Half-devil and half-child.”

Naipaul espoused the truth of his world in his writings. He believed, again perhaps with some legitimacy, that the white world was superior to the coloured one trundling around the same sun. It was not as if he was naive; and that he presumed the white man was a saint; that the white man did not exploit the world he took over and owned. The world, Naipaul said, was what it was. It was given. His challenge was to portray it accurately. The non-sentimentality of his enterprise grew on him. But every time you gaze outwards, the eyes blow the furnace and fire inward, too.

Naipaul famously complained that Joseph Conrad had been “everywhere before him”. But the difference was not hard to place between the two great — Conrad the more covert and deceptive of the two — colonial/post-colonial commentators.

In Conrad’s Heart of Darkness, the narrator, Marlow, discovers Kurtz, the depraved Belgian representative, going to pieces (“The horror! The horror!”) in the depth of the colonial Congo jungles.

Marlow returns to lie to Kurtz’s fiancée, the goodness of the man. It is this weakness of Conrad for decency, which helps keep pretences up and holds Western society together in their lies, that Naipaul does away with.

So when Naipaul says: “Africans need to be kicked, that’s the only thing they understand,” or, “it’s very attractive to people to be a victim. Instead of having to think out the whole situation, about history and your group and what you are doing... if you begin from the point of view of being a victim, you’ve got it half-made. I mean intellectually,” Naipaul is simply stating a case, and hoping to provoke a defence of a position taken for granted as given and right.

His sceptical philosophy hardened over the years. Ironically, the world is a place that tends to affirm possibly the worst in you. But Naipaul was not blind to its suffering. Even as a young man awaiting his admission and scholarship at Oxford, he was acutely aware of the aches. Consider this letter of his from Trinidad to his elder sister, Kamla, away at BHU. (From Between Father and Son: Family Letters, edited by Gillon Aitken):

My darling,
I want you to promise me one thing. I want you to promise that you will write a book in diary form about your stay in India. Try to stay at least 6 months — study conditions; analyse the character. Don’t be too bitter. Try to be humorous. Send your manuscript in instalments to me. I will work on them. I am getting introductions to quite a number of people — Pagett of Oxford included. Pa can put me on to Rodin, the star-writer of England’s Daily Express. Your book will be a great success from the financial point of view. I can see it even now — My Passage to India: A Record of Six Unhappy Months by Kamla Naipaul.

Don’t take everything in such a tragic way. I can’t imagine how a girl like you so fond of laughter can’t see the hilarious stupidity of the whole thing. If you go ahead taking everything to heart, your whole life will be just one lament…

I have found it difficult to live up to my own maxim. “We must be hard,” I say. “We must ignore the pain-shrieks of the dying world,” yet I can’t. There is so much suffering — so overpoweringly much. That is a cordial feature in life — suffering. It is as elemental as night. It also makes more keen the appreciation of happiness…

Naipaul was a man who took it for granted that he was a genius. If he was, his prickly personality is part of that package. The new world might want to separate the racist from the novelist. But without his racism and related worldviews, there is no Naipaul art. And that dark ink which flowed in his veins sprung from the sad, inescapable whiteness of the universe, the sad, sad fixities of human nature. You could only report it; you could never change the colonial nature of power.