Of course, the surnames on the Parsi graves are familiar. 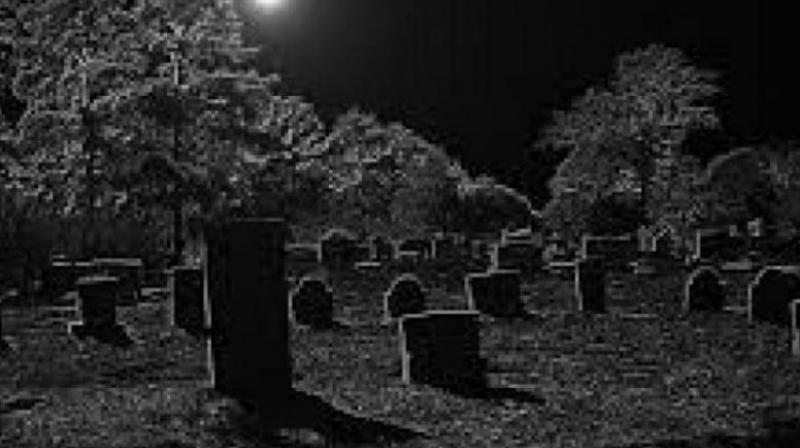 On the way home we discussed the fact that there was a Parsi graveyard at all. Brits would not have looked kindly on Parsis setting up a Tower of Silence where vultures could eat the corpses of their dead.

“A cat they say has nine lives
And we’re confined to one
But climbing trees and catching rats
Can’t be that much fun.

Some there are believe that we
Return in new avatars
But lives are what they always were
Eternal human scars.”
From The Case of the Ashamed Vahu by Bachchoo

My sister was in London recently and after the shopping centers of Oxford Street, Bromley and Bluewater – and trips to museums and a Shakespeare play, there was very little left to do. I had, in my long and happy existence in the sceptered isle, often heard about the Parsi cemetery in a vernal wood down the A3 motorway from London.

I hadn’t given it much thought, but on an idle afternoon, with a thousand pressing commitments I thought I could keep my sister amused on her last few days in London by taking a trip to this cemetery. I wouldn’t tell her where we were going. I’d say we are going for a country ride to a secret destination to keep the tension of expectancy going. When we got there, I would say we have come in quest of the grave of our illustrious ancestor.

I haven’t actually traced the precise connection of this illustrious ancestor to ourselves. For years I have believed, and this is probably a fact, that he was my great grandfather’s cousin.

He was called Shapurji Saklatvala and in 1920 was in Britain and a member of the Independent Labour Party which was a communist formation. He was selected as the parliamentary candidate of the ILP from North Battersea in London, stood for election and became the MP for that constituency for several years — Wikipedia has the details. He was known in the communist and Labour circles as ‘Comrade Saks’.

I knew that we were related when I first came to London to go to university in the mid sixties and met his son Behram Saklatvala who was then the head of Tata enterprises in London. I was on a Tata scholarship to Cambridge paid for by their foundation for the higher education of Indians and was told by my parents to pay a courtesy call to him. I did — and he hugged me and greeted me as his “kinsman”.

I subsequently made two enquiries. What was my relationship to this kinsman? Perhaps it was my father who told me that his maternal grandfather Jamsetji Saklatvala was Saks’ brother or cousin. The family was closely related to the Tatas who were on the way to being one of the first big capitalist family of India.

I enquired about the name, thinking that Saklat was a village in Gujarat from which my grandmother’s ancestors came. It wasn’t! No village of that name exists. I found out years later that my grandmother’s family imported jute from Bengal to Bombay and had a factory which turned it into sack cloth. Geddit? “Sack-clothwala” perverted into its Parsi equivalent.

Now apart from comrade Saks, the only not-so-publicly acclaimed ancestor in my family, on my father’s side was my great grandfather — this Jamsetji, as far as I can trace on both sides of my ancestry,  was the only individual who had written a book.

His book was a translation of Omar Khayyam’s Rubaiyat and he claimed in the introduction that it was perhaps not as beautiful a translation as Edward Fitzgerald’s universally renowned one, but that it was closer to the Persian original in intent, meaning and metaphor. I read the copy of the book that the family had preserved and found Jamsetji’s modesty to be accurate. It wasn’t in any sense as engaging as Fitzgerald’s Rubaiyat and its greater accuracy or closer to the Persian didn’t recommend itself or redeem its flatness.

My father told me that this grandfather of his spent his time translating Persian and other languages because he felt oppressed by the hubbub of their Parsi joint family at home in their Bombay house. He would peruse the daily papers’ deaths and funeral columns each morning to ascertain which Parsis had died and, regardless of whether he knew them or not he would make the excuse of attending their funerals and sit through them with his notebooks, doing his translations to get away from what he characterised as the domineering demands of his wife.

When I say that this personage was my only illustrious ancestor I may offend my cousins as my maternal grandfather was afforded the accolade of Khan Bahadur. He wasn’t a literary man and Lord Linlithgow, not the most popular of the Raj’s Viceroys, presented him the honour for services to the land records office. Deserved no doubt, but deservedly obscure.

So we drive to the Parsi cemetery, set in very salubrious woodlands with cemeteries of Muslims, of the British war dead and others around acres and acres of land.

Of course, the surnames on the Parsi graves are familiar. We search for the grave of Comrade Saks but find that of his father and his mother buried with her husband. Wikipedia tells us that his mother’s tomb has an inscription saying Comrade Saks’ remains are interred there. We found no such inscription even though it is photographed on the Wiki entry.

It wasn’t a wasted visit. We took no selfies — I regard them as the cheapest form of the vanity of human wishes and being surrounded by the dead I am willing to admit imine may be a prejudice against the obsession and merriment of our times.

On the way home we discussed the fact that there was a Parsi graveyard at all. Brits would not have looked kindly on Parsis setting up a Tower of Silence where vultures could eat the corpses of their dead. Those were pre-environmental-absorption-in-the-natural-cycle-of-life days. So, the Parsi dead were buried.

Then it occurred to me that the Kings of the Zoroastrian Achaemenid dynasty – Cyrus, Darius and Xerxes all had tombs. Parsis — go figure!