After Mandsaur, the storm may keep rising

Against this backdrop, prices will definitely undershoot all inflation targets, complicating life for the RBI further. 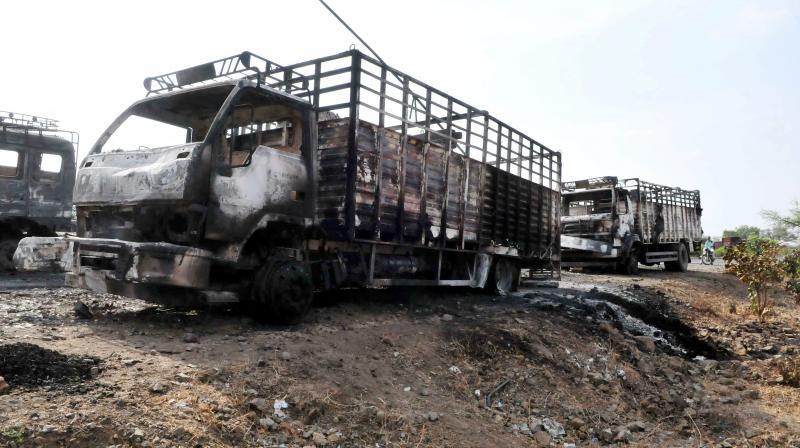 Rumour, it is said, has a thousand tongues and once hunches and innuendos are added to the mix and made public, you have an incendiary situation like Mandsaur and almost in parallel across Maharashtra, where farmers struck work displaying their displeasure. For a government, which has taken a pro-farmer position very early on, reprising the old Jai Kisan rhetoric, the situation right now is akin to jumping off the high dive. Imagine that a pro-farmer government had to keep its decision pertaining to a minimum support price (MSP) hike across 14 kharif crops secret last week, lest it inflame the already tinderbox-like scenario in Maharashtra and Madhya Pradesh. The decision was taken to alleviate the woes of a farmer community, which is faced with a glut of foodgrains, fruits and vegetables with prices at rock bottom for many of these commodities.

As kharif sowing begins next month, no official announcement was made about the increase in MSP, where it was believed that the Union Cabinet has gone with the recommendation of the agriculture ministry for the 2017-18 kharif season. Agriculture minister Radha Mohan Singh cancelled his press conference on the cleanliness drive while the Cabinet briefing was also scrapped. The Mandsaur firing where farmers lost their lives hung heavy in the air. The agriculture ministry had proposed a hike of Rs 80 per quintal in the MSP of paddy to Rs 1,550 for common grade variety and Rs 1,590 for “A” grade variety. For pulses, the MSP was proposed to be hiked by up to Rs 400 per quintal, including a bonus of Rs 200 for 2017-18. About Rs 175 per quintal hike in the MSP of soybean, a major crop in Madhya Pradesh, has been proposed by the ministry, while Rs 160 per quintal increase has been recommended in the cotton support price for the new season. All this is happening in a sector which continues to shine like a bright light in a rapidly decelerating economy. Despite all the challenges, it posted a gangbuster 5.2 per cent GDP growth in the last quarter of 2016-17, versus a tepid 1.5 per cent in the corresponding period in the previous year.

Two successive drought years saw unprecedented rural distress and when the rebound was finally in evidence after the last monsoon, the wheels came off the bus due to the impact of demonetisation during the full-blown rabi sowing; a paucity for ready cash acting as a deterrent. An Indian Council for Food and Agriculture representation to rural development minister Narendra Singh Tomar on Monday threw into stark relief the problem since then: bountiful rain in 2016 that followed two consecutive drought years raised the expectations of a bountiful harvest, which indeed was realised. However, the prices plummeted, which did not help farmers to emerge from the debts accrued in the previous season owing to the poor monsoon. This forced farmers to take to the streets demanding support from the government. Loan waivers by neighbouring states made matters worse and demands for similar action erupted among farmers. Besides the current issue, farmers are plagued perennially by lack of infrastructure, poor knowledge of market demands, price fluctuation and dependence on the monsoon, among many other factors.

The excess of foodgrains, abundant vegetables and fruits, resulting in rapid price erosion for farmers, meant that the rebound was shortlived as DeMo scythed through the farm economy. And since then, pricing pressure has broken the back of farmers. The perils of Indian agriculture cannot be understood for they are complex and at one level irrational. Take this year’s happenstance: despite a bumper crop, farmers in many states are in distress because of a sharp fall in prices, both in the domestic and global markets. As a consequence, inflation has cooled down to a multi-year low. Consumer prices rose by an annual 2.18 per cent last month, compared with a 2.99 per cent gain in April, data released by the ministry of statistics showed on Monday. With headline inflation undershooting the RBI’s mid-term target of four per cent for the past seven months, pressure has mounted on the central bank to resume interest rate cuts to juice up economic growth that has hit the lowest level in more than two years. The situation is quixotic for with India on the cusp of another strong monsoon, a surfeit of produce such as lentils, oilseeds and cereals will only add to farmer vicissitudes.

Absence of meaningful supply side interventions and the regular use of monetary tools to bottle the genie of inflation have now encumbered the central bank into taking a decision on interest rates. Against this backdrop, prices will definitely undershoot all inflation targets, complicating life for the RBI further. With the trend line headed southwards on food inflation and a strong rally in the rupee, which means cheaper imports, the wrath of the farmer is set to ramp up. This angst can turn quickly into anarchy. First we had an unprecedented drought across the southern states, then the morally corrosive farm loan waiver in Uttar Pradesh with the resultant clarion call for a similar move in Maharashtra and then Madhya Pradesh. Given that the unrest is limited to BJP-ruled states, who knows how quickly the contagion may spread? And what are the mechanisms to cauterise such a serious outbreak of anger and violence?

The farmer as a centrifugal force in the ensuing agrarian crisis despite a bumper crop is the biggest conundrum that policy mavens now have to find answers to. It is a zero-sum game for the hapless farmer — no rains means suicide and penury, record production also means the same thing? Looking at what is served on the lunch and dinner table of most Indians, we haven’t had it so good for a long time. The department of consumer affairs has a daily retail price matrix for nearly all commodities — perusing that I found that in Delhi atta is Rs 23 per kg, channa dal Rs 85 per kg, tur dal Rs 82 per kg, potato is Rs 16 per kg, onions are Rs 21 per kg, tomatoes are Rs 29 per kg and sugar at Rs 42 per kg, which is the only commodity on the higher side, but that is due to a different reason. One cannot second-guess whether the impending festival season will see the price line worm turn upwards. In fact, in India one cannot be an oracle and look beyond the present, for the plates are constantly shifting.

Needless to say that the government should be vigilant for when the shock of what transpired in Mandsaur subsides and nerves stop twitching, price monitoring has to be done on a real-time basis. Analysts reckon that data over the past few months suggests that normal seasonal patterns in food inflation have gone haywire even as underlying inflation has softened in-line with signals seen in various core gauges. If this continues and the farmer is not incentivised in some way or the other, then the irritability index will rise. The conscience of politicos has been shaken by Mandsaur as rural Bharat has shown itself as a tabernacle of querulousness and crabbiness.