Ship with coronavirus on board has turned into a floating prison

There are more than 3,700 people on the ship, a thousand of them crew members working hard below decks and the passenger staterooms. 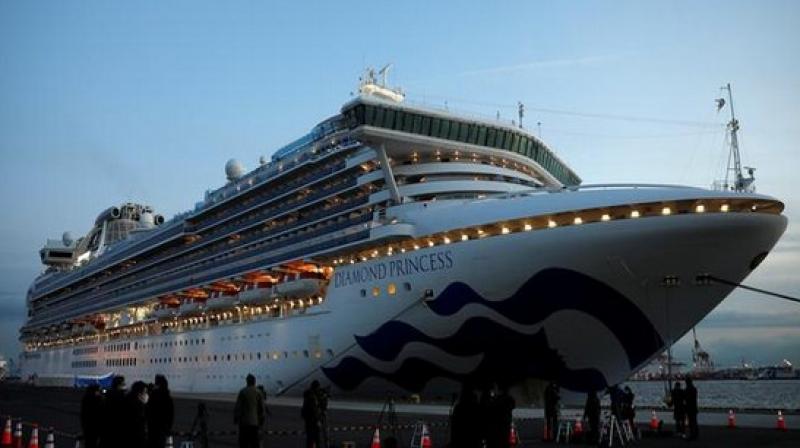 It appears to be a scene from a film. A large ship docked at a faraway harbour enveloped in grey mist. There are more than 3,700 people on the ship, a thousand of them crew members working hard below decks and the passenger staterooms. Yet, while the ship is docked, no one is permitted to get off except those who have already been stricken. To retrieve them, health workers arrive fully suited in white hazard protective gear. A makeshift decontamination chamber sprays both patients and health workers as they emerge from the ship. Everyone else must stay on board, where they have been confined since February 5.

This is the very real story of the Diamond Princess, part of the Princess Cruises Line, which has been docked at Yokohama harbour in Japan for the past week. The ship, which was quarantined after it was discovered that a passenger who had boarded it at an earlier port had been diagnosed with the novel coronavirus, has the highest number of confirmed cases for a single location outside of China. According to the latest count, 136 passengers have been found to have the coronavirus. According to Japanese health authorities, the passengers will be allowed to leave at the end of the two-week quarantine period on February 19, barring any “special circumstances”.

There may well be “special circumstances”. Experts have expressed concerns that the virus can spread even from asymptomatic individuals during its incubation period. Allowing the passengers and crew to disembark and catch a plane to their homes in Australia, Canada, the US and many other countries might mean that anyone who may have the virus could carry it to their countries.

For all of these reasons, the 3,700-plus people remain on the ship. A cruise ship that was supposed to be a vacation destination has become a floating prison. According to tweets and other reports, life on the ship is achingly boring and tedious. Even the best rooms are small, although passengers staying in these rooms at least have access to a balcony and hence fresh air. Those who have paid less are in interior rooms that have no windows at all. In these rooms, it is impossible to tell day from night, all of them melding into one long, interminable stretch.

If the situation for the passengers is bad, that of the crew who continue to work non-stop below decks is even worse. According to the New York Times, at least two crewmembers are assigned to each one of the tiny cabins that function as their living space. Three, sometimes four, people have to share a bathroom. It is no surprise that at least 10 of the people reported to be infected are crew members.

It is a sad illustration of the cruelty of class systems. The crew, most of them from the Philippines and India, prepare and deliver the three meals that each passenger is allotted per day to their rooms so that the passengers remain sequestered (as per the instructions of Japanese authorities). On Sunday, an Indian crew member (there are hundreds of them) recorded a video that quickly went viral. In the video, he begs the Indian government to rescue the Indian citizens on the ship. Otherwise, he says, the virus that is spreading its tentacles ever deeper into the ship will also claim them.

There are moral dilemmas here. How long should the thousands on the Diamond Princess, or for that matter the millions in Wuhan, be quarantined for? Is it humane to make a random sample of human beings, rendered unfortunate through chance and circumstance and having to bear the cost of ensuring that humanity remains relatively safe? Currently, the answer seems yes. Videos emerging from Wuhan, where many have literally been locked into their houses (padlocks installed outside by the police) show that authorities have to use increasingly severe measures to maintain the quarantine. The situation on the ship is calmer, but one wonders whether it will continue to be so in the event that the passengers learn they will not be leaving the vessel on February 19.

In the meantime, the rest of us who are lucky enough not to have the virus or face the quarantine should take a moment to consider those in such difficult circumstances. How would one pass the endless stretches of time; how would one prevent a psychological breakdown; who would one wish to be quarantined with were such a situation to arise? These are useful mind experiments; more practical ones include the procurement of face masks, disinfectant and hand sanitiser (which are manufactured in China and likely to face shortages in the coming days).

Meanwhile, the Diamond Princess remains docked at Yokohama harbour, taking periodic journeys out to sea so it can dispose of the wastewater that the ship is producing. As it does so, one cannot help but wonder if the planet we live on, one which is afflicted with this disease, is not simply a larger version of the Diamond Princess, some of us more adept than others at passing the time until the virus takes us. The lucky and the unlucky, the healthy and the diseased, the poor and the rich — all float together until the arrival of some unforeseen end.