The world must sue China 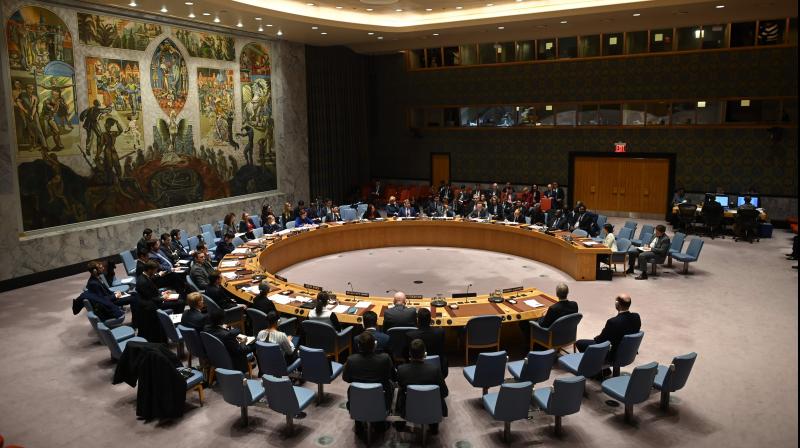 Pragmatism and politics have long prevailed over any pretence of reform in the discourse on permanent membership of the United Nations Security Council (UNSC). A set of legal barriers along with the political influence of the permanent members (P-5), particularly China, have obstructed the UNSC reform process. And the obvious victims of this have been the Group of Four (G-4) countries – India, Japan, Brazil and Germany – who are considered the natural frontrunners for permanent berths in the UNSC. Nonetheless, with the coronavirus pandemic questioning the relevance of the global governance regime itself, is it not appropriate to review the relevance of the current decision-making process in the UN and its affiliated bodies?

On March 31, 2020, addressing the socioeconomic impacts of COVID-19, UN secretary-general Antonio Guterres stated that, "Everything we do during and after this crisis must be with a strong focus on building more equal, inclusive and sustainable economies and societies that are more resilient in the face of pandemics, climate change, and the many other global challenges we face.''

His words assume great significance given the cavalier and authoritarian Chinese approach within both the UNSC and the World Health Organization (WHO). The same arrogance was on display in the early days of the outbreak, when the Chinese authorities tried to cover it up and punished whistle-blowers, allowing the virus to spread around the globe.

In view of the UN secretary-general’s comment, the UNSC has largely remained silent on the pandemic. An important reason for this was that for the month of March 2020, the UNSC was under the presidency of China. (It passed to the Dominican Republic in April.) The WHO declared the outbreak as a pandemic on March 11, while the UNSC has still not scheduled a meeting to discuss the rapidly spreading disease. Further, on March 26, China’s ambassador to the UN, Zhang Jun, chaired UNSC's first-ever video conference which adopted four new resolutions, none of which, however, pertained to the coronavirus. Further, the Estonian government has blamed China for vetoing its proposal with the help of Russia and South Africa to discuss the COVID-19 situation with transparency.

As a P-5 country, China has time and again influenced the decision-making process in the UNSC on many pressing matters, especially regarding its own national or foreign policy interests. However, it has often fallen short of genuinely supporting global issues in times of need, especially amidst the Covid-19 pandemic.  In other words, Beijing has overlooked the principles of a rules-based order that the UN or the UNSC as its highest decision-making body should ideally implement.

And yet, the WHO, a specialised agency of the UN, has been helping China expand its clout as a public health superpower. However, amid the coronavirus crisis, the agency’s support of China is drawing questions about the relationship between the two sides. The WHO, which is heavily dependent on Chinese funding, has consistently been lauding Chinese ‘transparency’ and 'effective management' of the ongoing crisis, news of which in fact was not shared with the organisation until mid-January.

The UN system, including the WHO, has not only failed to anticipate the global spread of the virus but is also currently struggling to control the pandemic through a credible medical response system. Apart from the damage COVID-19 has inflicted on the global economy and its supply-chain networks, it has importantly exposed the systemic flaws in the current global governance architecture to address universal health problems across continents. While drugs and vaccines for tackling COVID-19 are still being developed or tested, the wide spreading pandemic is prompting many questions such as: Is it not time for an overhaul of the UN governance systems? Isn’t the world deserving of a better world health system and an effective UNSC?

The world needs values and ethical practices, as also leaders with vision who are transparent and trustworthy. The COVID-19 scenario shows that China does not have the required leadership skills that the world currently needs. Its non-transparent governance system, which heavily draws from its opaque authoritarian political system under the Communist Party of China, is certainly a major obstruction. Even in a health crisis such as this, Beijing has been occupied more with building its own global influence, by supplying masks and medical equipment to cover up its damage. However, the pandemic needs a value-based health care approach that is qualitative in nature, and what countries such as Japan and India could possibly bring to the table, rather than China.

Certainly, the G-4 countries, particularly, Japan and India, offer such an alternative leadership, which has not been as yet explored.The comity of nations, surprisingly, has not realised the importance of such a grouping and its constituent members. For example, Beijing has officially objected to the G-4’s bid for permanent membership in the UNSC. The lack of serious support from the United States has only helped sustain Chinese supremacy in the global governance architecture. Despite India’s and Japan’s international efforts to defend a rules-based order, their bids for permanent membership have effectively been clogged with relative ease by China.

Beijing has rejected Japan’s strong candidacy – one of the largest financial contributors to the UN – because it feels that global responsibility should not be judged through financial criteria. In fact, China has time and again revived the issue of Japan’s war crimes to prevent this debate from going forward. Likewise, China has never valued India’s historical support to China’s membership in the UNSC and increasingly views India as pro United States, opposing any prospective entry of India into the organization. Besides, China wants to sustain the global credibility that comes with being the only Asian power with a veto and permanent seat in the UNSC. China has had political differences with Brazil and Germany, too, which have only grown over the years. Brazil’s education minister Abraham Weintraub recently drew the wrath of China after he tweeted that coronavirus is part of Beijing’s geopolitical ‘plan for world domination’. Further, German presence in the P-5 is not something China is ready for, as it would tip the votes in a pro-European Union lobby within the UNSC, even post Brexit.

The current pandemic will hopefully encourage nations to believe in the values of fellowship, harmony and universal well-being to not just pursue UNSC reform or revisit the scope and mandate of international agencies such as the WHO, which have begun to look partisan with greater zeal, but also take actions against China’s irresponsible behaviour. Thus, in the post-COVID-19 period, the global community must hold China accountable through treaties, covenants and charters; especially in view of similar health negligence by China during the SARS epidemic in 2002-2003.

Legal options should be explored against China at the WHO for breaching the International Health Regulations, and legal proceedings in the International Court of Justice and the Permanent Court of Arbitration could be initiated too. Such legal actions should not only be explored at the UN-affiliated institutions, but also in other international forums too. For instance, actions could be taken against China under the World Trade Organization rules; claims could be brought before the Hong Kong courts as the actions of state bodies breached the rights under the International Covenant on Economic, Social and Cultural Rights; claims could be brought in the US Federal Courts against the Chinese state as an exemption within the Foreign Sovereign Immunities Act; and options could also be explored in the courts in the United Kingdom against the commercial entities linked to the Chinese state or the Communist Party of China. Time has come to tax and reprimand China for its authoritarian and non-responsible role in the global governance regimes.