Memories of another riot: Lessons of 1984 not learnt

The Congress Party never recovered from that genocide. But nor did we, says Saikat Datta 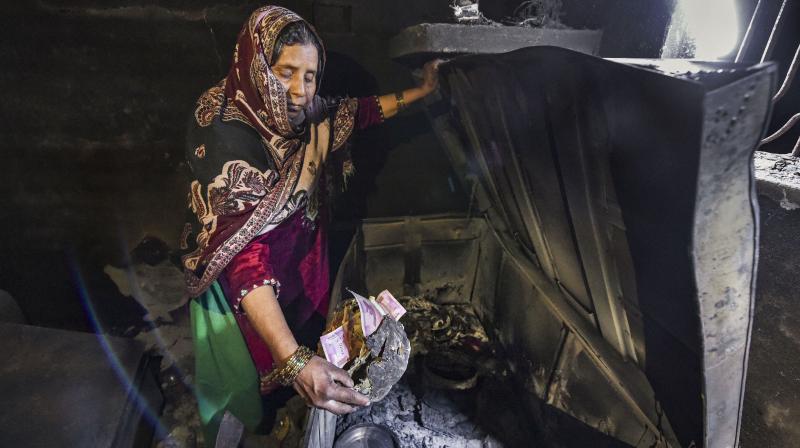 A woman shows the remains of her savings burnt in the recent violence in Delhi. (PTI)

I was 10 years old when the pogrom against the Sikhs started in Delhi in the aftermath of Prime Minister Indira Gandhi’s assassination. Naturally, some of my early memories are of extreme violence. I saw houses being attacked, shops ransacked and men being killed. A nearby gurdwara in South Delhi was attacked and nearly burnt.

These memories are my prism to study what happened in Delhi in February this year, as parts of the city burnt and at last count left over 50 people dead and hundreds injured.

In 1984, after the Army was finally deployed, the next few nights as residents of a Delhi Development Authority colony, we were asked to take urgent measures. It was decided that the dominant Hindu Bengali and Punjabi families in the colony would ensure complete safety of the few Sikh families living in the complex. Patrolling duties were handed out to all males to ensure there was some form of resistance if any mob arrived at the gates. Stones were gathered up and placed at strategic points and rods and stout tree branches were distributed as weapons to the patrols.

My father, as a 10-year-old, had to leave his ancestral home in the newly-created East Pakistan. He had seen his share of violence during the 1947 Partition. His family had settled in a place called Sylhet, then part of undivided Assam and one of the two places in the subcontinent where a plebiscite was held. Assam, under then provincial leader Gopinath Bordoloi, was keen that the Bengali-speaking district of Sylhet was given off to East Pakistan.

The Muslims were a majority and voted largely on religious lines. Overnight, district boundaries became an international border. My father’s family packed up overnight and trudged through hills and crossed rivers to arrive in the new India and rebuilt their broken lives.

During the anti-Sikh riots, my father’s patrolling duty was between 1 am and 4 am. Every night, as soon as he would leave to keep watch, I would quietly get up and go to the window from where I could see him. I kept a khukri at hand, gifted by an uncle who was an officer with an Indian Army Gurkha battallion. In my mind, I felt responsible for my father and I was prepared to rush and fight alongside him, if he was attacked.

The few Sikh kids in the colony took haircuts to look like Hindus and we would go out and buy provisions for them whenever the curfew was lifted. One night the young men in the colony were dispatched to every house with an urgent missive. Every family was warned not to drink the water supplied by the municipal corporation. There was a rumour that the Sikhs had poisoned the water supply to Delhi and we couldn’t drink it. The next day was spent trapped at home, thirsty and waiting for confirmation that the water was safe.

Days later we understood that this was a ploy to make us distrust the Sikhs.
“Othering” a community: This was long before fake news became fashionable, and we did not have WhatsApp to spread disinformation. Despite these obvious limitations, the rumour spread far across the city. While it added to the panic, it also seeded doubts about the Sikhs living amidst us. This was our first experience of how a community can be easily demonised and “othered”.
Ironically, the fear and the hatred of a Congress-led pogrom against a minority group led many people to become staunch opponents of the party. For years they proudly announced that they had voted for the BJP, even though the party had no hope of winning the polls. Many were convinced that the Congress had “appeased” one minority, while targeting the Sikhs. For many Hindu Bengalis living nearby, in a colony that was originally called the East Pakistan Displaced Persons’ Camp (later renamed as Chittaranjan Park), the BJP represented a party that would not “appease” a particular minority.

Ironically, the targeting of the Sikhs, a tiny minority, led to anger and the need for legitimacy to target another minority, Muslims. In living rooms, families spoke of how the BJP would end the reign of the Congress and endemic corruption, while also putting the Muslims in place. By the time the Babri Masjid was demolished in 1992, many responded to news polls by pointing out that a major “problem” had been finally “resolved”.

The “not appease” is a euphemism for othering a minority. It now became a group that could be identified by their clothes, religious practices, food habits and names. They were now made to bear the brunt of insecurities and fears of the majority that stemmed from attacks on another minority in 1984.

Cut to the Delhi of 2020. The systemic political and bureaucratic failures that led to the riots of 1984 have remained exactly the same. The reports by the Subsidiary Intelligence Bureau (SIB) to the Delhi police were vague, and had no clue about a riot being planned. Most Cabinet ministers in the Narendra Modi government, including those directly responsible for law and order in the national capital, were in Gujarat planning for US President Donald Trump’s visit.

The lieutenant-governor, appointed by the Central government to govern Delhi, held two meetings with top police officials who never asked for additional troops and did not anticipate the riots. A meeting held with the Union home secretary to review security preparations for Trump’s visit had no discussion about a possible riot.

Then Delhi police commissioner Amulya Patnaik had failed to stand up for his constabulary when Delhi’s lawyers attacked them during an agitation in November last year. His constables had to stand with placards outside the police headquarters, watching hopelessly as their leadership dithered. Once again, Patnaik’s leadership qualities failed to impress as the city burned.

The Congress Party never recovered from the genocide. But nor did we recover — those of us who witnessed it first hand. The same panic that we witnessed in 1984 is back on the streets of Delhi. The only difference is that we are now less tolerant and fear more. We know who and what has led us to that fear. But we can’t understand why we have become afraid. We are now consumed by hate.

If India needs to aspire to be great, it will have to let go of its insecurities and fears. It will have to embrace the fact that we are one people. We will rise or fall as one. That choice is for us to make. Political parties will rise and fall. But future generations will thrive or perish depending upon what we do today.

The writer is a journalist based in New Delhi and a founding partner of CSDR Consulting.