360 degree: ‘I was a kar sevak before Masjid was demolished’

The sites were levelled and water was sprinkled on the ground to make sure that no traces of the gravestones were left. 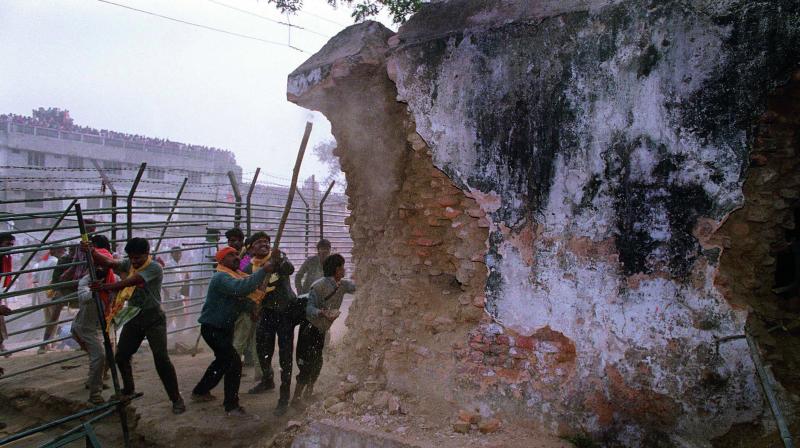 In this file photo, people demolish a structure that was part of the Babri Masjid.

I was a kar sevak before the controversial structure of the Ram Janambhoomi-Babri Masjid was demolished in Ayodhya way back in 1992.

Armed with a letter of introduction from a member of the Delhi unit of the Bharatiya Janata Party, I had wormed my way into the ranks of the kar sevaks at Ayodhya.

During my first three-day maiden visit to the holy town,  I was put through intense grilling to establish my credentials as a kar sevak. Several times I had to recite an apocryphal tale of being a Kashmiri Hindu who had to abandon his studies in Kashmir because of militant activity. It was terrifying to see the extent to which the Rashtriya Swayamsevak Sangh, BJP, Vishwa Hindu Parishad and Bajrang Dal combine had gone to ensure there was no infiltration. After I was accepted as a “genuine” kar sevak, I saw the face that lay behind a façade of religious drama and masked by political hoopla.

I lived in Guru Gobind Singh camp with kar sevaks from Delhi and Haryana. I ate, bathed and slept with them. I was briefed by pracharaks of the RSS and “indoctrinated” by the Bajrang Dal. After my first night’s stay, I saw hundreds of people assembled around two gravestones near my tent.

Soon people started breaking these gravestones with iron rods, large boulders and sharp instruments. I, too, had to join them. People called it “chotti kar seva”.

Another gravestone was spotted and soon this was also broken down. The sites were levelled and water was sprinkled on the ground to make sure that no traces of the gravestones were left. The rubble was lifted and thrown into a nearby pond.

Soon after the operation began, two makeshift shops were set up at the site to sell tea. Some Bajrang Dal activists wanted to build a small temple there. They were prevented by others who said it would give rise to another controversy and hamper the construction work of the Ram temple.

At the temple, the UP police and the Provincial Armed Constabulary were placed outside the structure, while the Central Reserve Police Force was inside. On the first evening, I had spotted a PAC constable shouting “Jai Siya Ram” slogans along with kar sevaks only a few meters away from the disputed structure. The PAC’s relationship with kar sevaks was as cordial, perhaps, as that between the BJP and the RSS. As I moved through Ayodhya with a two-day stubble and wearing soiled clothes, I met many PAC men. We (kar sevaks) were treated with respect, even deference. One night, some other kar sevaks and I spent four hours chatting with a group of PAC men. “Don’t worry about us, we are solidly behind you,” said one policeman. “If we are ordered on December 6 to attack you, we will lay down our arms and join you,” reassured another. “We will force the paramilitary to surrender,” said a third.

The fact that I was a Kashmiri Hindu and had travelled to Ayodhya at my expense for this cause seemed to impress people no end. A sant and a boy from Jaipur bowed before me when they heard this and said, “Hindus need staunch supporters like you.” The boy from Jaipur told me that he had been assigned  the job of security, which evidently meant being with the PAC or the UP police.

The bonhomie between the kar sevaks and the UP policemen was striking. They brought us tea, and later, one of them invited us over for breakfast to their camp. A boy from Faridabad suggested that I should join the RSS. He said a 20-day camp is held in three places every year in the country to impart arms training to Sangh activists.

“This year we were taught how to handle explosives also. Even some Kashmiris were there,” he added. Two boys from Hissar took me to their tent. They showed me a flick knife and taught me how to use it.

I felt a strange helplessness throughout my stay at Ayodhya. I couldn’t investigate any incident that I would see or hear about in the fear of being identified as a journalist. It was painful being a reporter and yet unable to be one.