Problems of sartorial and royal kind 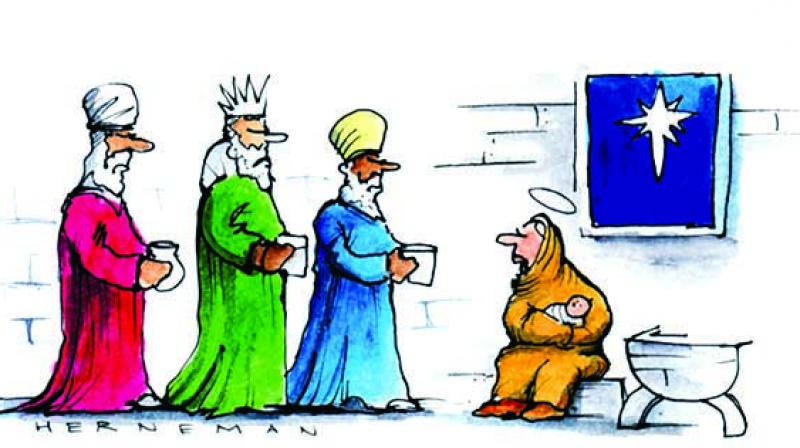 ‘Wise men? But we’ve had enough of experts.’

I had always known that the moment a fashionable woman in kitten heels became the Prime Minister someone would start noticing her clothes. And after Princess Catherine — whose clothes are discussed ad nauseam — we would now have begin to check out the price of the PM’s trousers. Of course, we had no such detail before about PM David Cameron’s suits — whilst we would occasionally learn what his wife wore and how much it cost. Also, men usually wear the same boring black or blue — and we have been admiring Theresa May’s outfits for some time. And why not? For a change we have a good looking woman at the helm!

However, I had not imagined that it would lead to a face off among the feministas. But according to the tabloids, there has been a falling out between a former education secretary, Nicky Morgan and the PM’s team over the price of the PM’s trousers. Ms May was photographed wearing a pair of leather trousers which cost £995 — and Ms Morgan was upset enough to say that the pants had been “noticed and discussed”. And so, while Ms Morgan was part of a group that discussed Brexit with the PM she is no longer an invitee. A rather rude note was supposedly sent out about it by the PM’s Chief of Staff, Fiona Hill, to another MP saying, “Don’t bring that woman to Downing Street again.” Hmm. It seems that all PMs have to look out for the price tags on their clothes as otherwise it might upset the JAMs — or “Just About Managing” families.

Meanwhile, we now know the cost of every piece of clothing that the PM wears, from her Amanda Wakeley coat to her Russell & Bromley shoes. However, she was also wearing a silk Nehru jacket, which was tagged at £1,000. Now that even shocked me. Someone obviously charged her three times the price!

There is a lovely Chinatown in London and Chinese restaurants across the country. But trust the Chinese to want what is practically a British invention — the quintessential pub. Now the Chinese want English pubs in reverse ethnic exports. And not just any old pub. They want the pub that David Cameron took President Xi Jinping to when he came to stay at the Chequers, the Prime Minister’s weekend retreat. The Plough is picturesquely located in the Chiltern Hills. After seeing it on TV, one Chinese company Sino Fortune made a bid for it. The pub was not available for sale but the landlord settled for £2 million for its lookalike. Now the Plough will be copied across China so the Chinese can, like the English, down their Sunday pint.

Christmas is coming. Madame Tussauds’ has just unveiled the royal family. There beside the Queen and the Duke of Edinburgh are Prince Charles and Camilla, William and Kate. The younger princes, Andrew and Edward and the Princess Royal, Anne, alas — did not make the grade.

But the younger royals now have a serious complaint. As the Queen’s children they are a called HRH — His/Her Royal Highness. But only the children of the monarch’s sons have the title HRH. Princess Anne’s daughters are just commoners. Andrew and Edward are worried that their grandchildren will have no title; just be commoners like the rest of us. So they want the Queen to guarantee that their daughters’ husbands will be made Earls which then solves the problem. No more slumming for the grand children, honour saved!

Even more serious is Prince Harry’s problem. He is not the son of a monarch but only a grandson. William is alright because he is in the line of succession. So if Harry marries his latest love Meghan Markle right now — their children will be commoners. But if he were to wait till Prince Charles became the monarch then his children would be royals. But would he really want to wait for 10 more years?

Jumpin Jack Flash! The incredible and ageless Mick Jagger, 73, is to be a father for the eighth time. The Rolling Stones have just released their new record revisiting their old love of the Blues. But Mick has attracted a series of beautiful women. The latest Melanie Hammick, a ballet dancer is the fifth woman to bear Mick a child. His oldest is 46-year-old Karis and Mick is already a grandfather and a great-grandfather. But there is just no stopping him!

Not everyone is complimentary about Mick Jagger’s latest achievement. But there has been a rush of compliments for what a rather extraordinary mother — Julie Bradford — has done for her daughter Jessica. When Jessica was diagnosed at 18 as having grade 2 cervical cancer, she realised that the radiotherapy treatment would leave her infertile. However, the doctors managed to freeze her eggs. So now recently her mother Julie, 45, offered to be the surrogate mother and carry her grandson. Her daughter gratefully accepted. The result — Jack Jenkins already a week old. A happy baby who does not wake up at night nor does he cry. However, while the family is delighted the biology has been simple but the relationship is complex!