Who killed Gauri? We all failed her

On the contrary, we see most criminals with political links go scot-free, and those who cannot dodge jail get new escape routes. 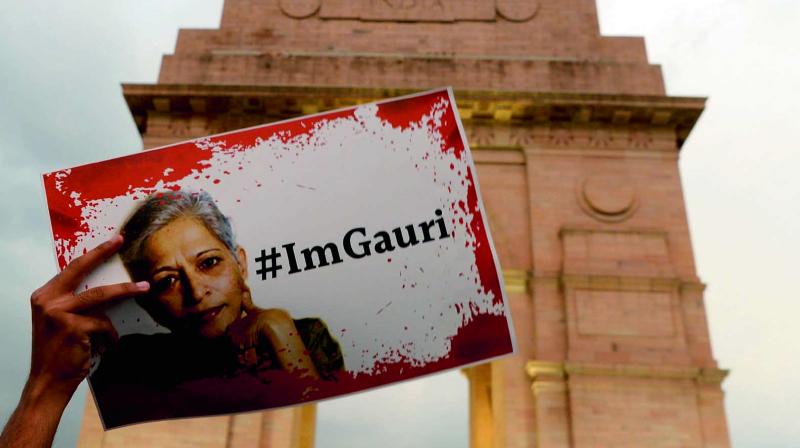 Activists take part in a protest rally against the killing of journalist Gauri Lankesh at India Gate. (Photo: AFP)

What is this country coming to?” The opening line of Girish Karnad’s compelling play Tughlaq has come back to haunt us. Karnad is among 25 Kannada writers and intellectuals who have been given police protection following the shocking murder of Gauri Lankesh. For thinkers are in danger. This is the age of hollow men, headpiece filled with straw, leaning together, with dried voices. We must not think for ourselves, or speak out. This is the age of submission, of silence.

Why else would writers need police protection? Traditionally, writers were protected by readers, by a society that valued writers, artists, teachers, thinkers. But for years intolerance of inconvenient thought has been growing — now we have allowed it to escalate into the shameless murder of dissent. From banning books to vandalising libraries and burning texts, from attacking art to hounding artists and chasing M.F. Husain out of India, to brazenly harassing anybody who doesn’t conform to my idea of my country. From Salman Rushdie’s book banned to placate Muslims to Wendy Doniger’s book banned to placate Hindus, we have come a long way while staying rooted to the same spot. Because we like to magnanimously grant wishes to interest groups for narrow political gain, often going against the basic principles that our nation was founded on. If we really believed in equality as guaranteed by the Constitution, maybe none of this would have happened.

So now, instead of introspecting on what went wrong, we are either gloating over the “well-deserved” murder of a gutsy journalist, or moving the dialogue towards who killed her. We know who killed her. We may not know who pulled the trigger, but we know who were behind it. We all were.

We have all failed Gauri, my old colleague from Sunday magazine. The State failed her, by allowing and encouraging “non-state actors” who wreak violence on critics and independent thinkers. The media failed her by either cowering before power or by supporting power beyond the call of duty, by being lured by profit, cosying up to the establishment, brushing aside basic journalistic ethics.

The new and more democratic media, the social media, is the Wild West of curious comments and jubilant jibes, where unmoderated hostility and violence roll on, gathering support in a realm that defies logic, facts and decency. Right-wingers were always cheerfully vocal on these forums, and moderates and liberals found getting down to that crass level beneath their dignity. So the bigots ruled the Internet, creating an illiberal reality that was a lie and deeply problematic for a pluralistic culture.

The publishing industry failed her. By withdrawing and pulping books that ruffled feathers and refusing to publish books that could be problematic they stifled dialogue and paved the way for this majoritarian rule over thought and ideas. The other nurturing ground of thought, education, is being tailored for years to suit this make-believe reality. We allow it.

The industrial houses failed her. By keeping their hands clean and their eyes focused squarely on the bottom line, by caring only about their own profit and not the larger profit of their country and their future generations, they quietly supported injustice and the deliberate destruction of the constitutional guarantees that made India such a wonderfully free, pluralistic democracy.

The police failed her. They failed to stop the murderers as they weaved their way through everyday life and picked out their victims in cold blood — killing Dabholkar, Pansare, Kalburgi before they turned their guns on Gauri. They failed to stop, or nab, the killers of valiant reporters and editors in small towns and villages, fearless journalists silenced by corrupt politicians and powerful enemies.

On the contrary, we see most criminals with political links go scot-free, and those who cannot dodge jail get new escape routes. D.G. Vanzara, Gujarat’s notorious encounter cop, is back in the news contemplating a political career. And Maya Kodnani, convicted of organising massacres during the 2002 Gujarat violence, promises to get BJP president Amit Shah to court to testify in her favour. Sajjan Kumar and Jagdish Tytler, accused of leading the 1984 Sikh massacre in Delhi, still roam free.

The 1993 Mumbai blasts verdict has finally come. And following a curious verdict by the high court that almost legitimised the 1992 demolition, the Babri Masjid case is now in the Supreme Court.

But would there be the Mumbai blasts — masterminded by Muslims, as we love to say — if there were no Mumbai riots, masterminded by Hindus? Would there be the Mumbai riots if the Babri Masjid had not been demolished by the Hindutva fundamentalists led by the BJP? Would the Babri Masjid be demolished if the then Congress government had not opened the gates to the Ram Janmabhoomi site in order to please the Hindus? Would the “secular” Congress feel inclined to please the Hindus if it hadn’t tried to please the Muslims by supporting the Muslim clerics in the Shah Bano case? We could go on and on…

No, Gauri’s killing was not planned today. It was being hatched for decades. As we slowly moved away from constitutional guarantees and curbed our rights and freedoms as citizens. As we paved the way for the slow stifling of dissent. And the murder of diverse opinions.

We need to stop believing that it’s beneath our dignity to respond to the “fools” who attack our culture hoping for a Hindu rashtra. Our media needs to recognise the dangers it is leading our country into by selfish commercial interest, fear or the greed for power. We need to realise that mischievous news and debates on TV can mislead and harm us. We need to get our hands dirty, as citizens who care, to reclaim our identities as citizens who matter.

We need to fight the factless, tactless, graceless, unethical trolls on the social media and the deluded people in real life — friends, family, colleagues — who may be armed with false information and righteous indignation.

We wouldn’t be here if we hadn’t allowed our politicians to play with our sentiments, if we hadn’t tried to take shortcuts in our battle for identity politics. Stop it now. They are at your door.