Trespass on Barahoti: We had it coming

An improved infrastructure should be provided to the Indian Army and the paramilitary forces to man the area. 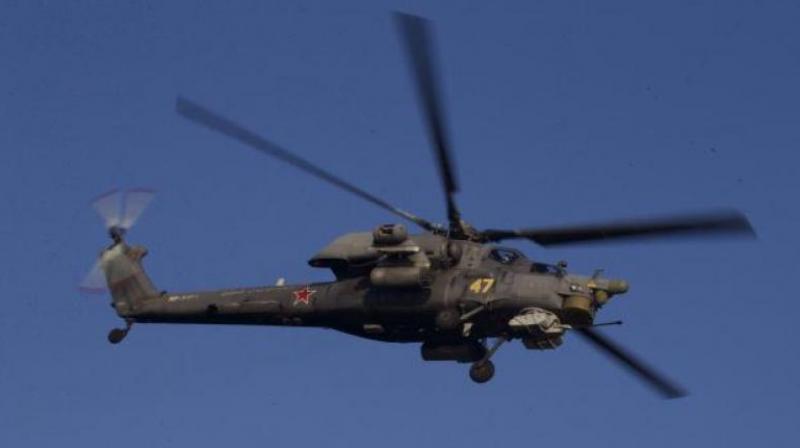 According to PTI, on June 3, two helicopters of the People’s Liberation Army (PLA) hovered over the Barahoti bowl in Chamoli district in Uttarakhand.

The news agency reported that the choppers, which returned to the Chinese side after about five minutes, “could have carried out aerial photography of Indian ground troops during what was possibly a reconnaissance mission”.

The choppers were identified as the Zhiba (WZ-9) attack helicopters. Incidentally, on the same day, Lt Gen. He Lei, vice-president of the PLA’s Academy of Military Science addressed the plenary session of the 16th Shangri-La Dialogue in Singapore. He said: “China has always worked to maintain, build and contribute to international and regional peace and has firmly followed the path of peaceful development although it is faced with multiple security challenges.”

Whether it is in the South China Sea (SCS) or Barahoti, the Chinese break the rules that they pretend to uphold; intruding areas, occupying them and later telling the other stakeholders — “let us discuss”. Opponents, facing a fait accompli, are most of the time unable to give a fitting answer (this is even the case of Donald Trump in the SCS).

In the present situation, Chamoli’s superintendent of police, Tripti Bhatt, told a daily that the helicopter(s) entered the Indian airspace from the Tibetan side; however, she refused to confirm that it was a Chinese helicopter. This raises several questions.

First, for such sensitive issues, there should be only one spokesperson, whether from the defence ministry or the Indo-Tibet Border Police (ITBP) who gives factual information to the press.

Second, photos or videos should be provided to the media, which hopefully can help the Indian public to better understand what China does.

Third, an improved infrastructure should be provided to the Indian Army and the paramilitary forces to man the area. The aggression is the result of neglect of the Himalayan frontier shared with China for the past 60 years.

Finally, there are no “minor” issues when the Indian borders are concerned. Barahoti, which witnessed the first Chinese intrusions on Indian soil in 1954 is indeed a telling case.

Every summer, the Indian media cries foul. “The Chinese have come again”; “The Chinese Dragon struck again”, screamed reports originating from this “inaccessible” part of Uttarakhand.

Last year, a national daily  reported: “It all began on July 22, when an Indian team of 19 civilians led by a sub-divisional magistrate first entered into the area in Barahoti. …Three days later for the first time, China sent a helicopter to the area.”

The Government of India, as usual, played down the incident. As a result, this year, two choppers have come, and next year more will come.

Last year, another serious issue cropped up. As per an agreed protocol signed in 2005 and reiterated in 2013 with China, the ITBP personnel were not carrying firearms, while the Chinese were carrying arms and wearing uniforms.

But how did the story start? In July 1952, in a secret note, the Intelligence Bureau described the topography of the Himalaya in this area: “The Garhwal-Tibet border can only be crossed through the Mana and Niti Valleys where there are open places and habitation, while the rest of the border area consists of snow-covered mountains studded with glaciers. …There are four passes between Niti Valley and Tibet”. One of them was Tunjun-la, north of Barahoti.

A couple of years earlier, some Tibetans officials had entered the tiny bowl of Barahoti. The IB explained the background of the so-called dispute: “About the end of last century, the Tibetans had established a customs post at Hoti Plain. To stop this practice, the British government had to send out a detachment of Gurkhas along with the deputy collector in 1890. This had a salutary effect and the Tibetans removed their post. It appears that for some time, the Tibetans have again been establishing a police-cum-customs post at Hoti during the trading season.”

As in most areas in the Himalaya, the access is far easier from the Tibetan side than from the Indian. Over the years, this greatly facilitated the Chinese intrusions.

The 1952 IB note continued: “It is quite possible that if the Tibetans are not stopped from establishing their post at Hoti Plain, they might eventually claim it to be their own territory.” It then recommended: “It is, therefore, essential that the government of India should make it clear to the government of Tibet and its Dzongpon [District Commissioner] that the Hoti Plain is Indian territory and the Tibetans have no right to establish any customs post there.”

At that time, the Uttar Pradesh government asserted that no case of “encroachment has so far been reported though at one or two places tax collectors from Tibet did come in but were persuaded to go back.”

The above incident was enough for China to claim the area as “hers”. It happened as soon as the negotiations for the Panchsheel Agreement, (which only deals with trade and pilgrimage between Tibet and India) were completed in April 1954. It was soon obvious that the Indian diplomats had goofed up, they had “forgotten” to discuss the Indo-Tibet border.

Though the “smart” Indian negotiators in Beijing had been sent a complete list of the Himalayan passes, they believed that by naming six passes only, they had delineated a border.

As a result of India not insisting on all the passes, China started claiming several areas south of the watershed, in particular the area south of the Tunjun-la pass, where Barahoti is located.

It is only much later that the South Block understood the meaning of Premier Zhou En-lai’s opening remarks, at the time of signature: “there are bound to be some problems between two great countries like India and China with a long common border… but we are prepared to settle all such problems as are ripe for settlement now”.

Less than two months after that, India discovered that all problems had not been solved: the first Chinese incursion in the Barahoti area of Uttar Pradesh occurred in June 1954. This was the first of a series of incursions numbering in the hundreds, which culminated in the attack of October 1962.

Correspondence went on for four years and in 1958 a conference was held to sort out the issue. China refused to admit that the watershed marked the frontier and that Tunjun-la pass had for centuries been the traditional border.

After the failure of the 1958 talks, foreign secretary Subimal Dutt wrote: “Each side has put forward its arguments in favour of its case. The Chinese are contesting our arguments and we are, of course, contesting theirs. The only positive suggestion made by the Chinese is that there should be a joint local enquiry.”

But India refused when it discovered that was just a pretext for China to find out the exact location of the place. They thought that Barahoti (they call it Wuje) was north of Tunjun-la. It seems a joke; unfortunately, the Chinese intrusions still continue today.

More than 60 years later, the case of Barahoti shows that for the Chinese, there is no big or small issue, every inch is a victory, and the second lesson is that there is no short-cut to building a proper infrastructure.

And India should not hesitate to send drones to the area if required.