Such a happy, well-timed ‘accident’…

Akshaye is in every frame wearing the coolest suits, and doing an easy-breezy job of running the country. 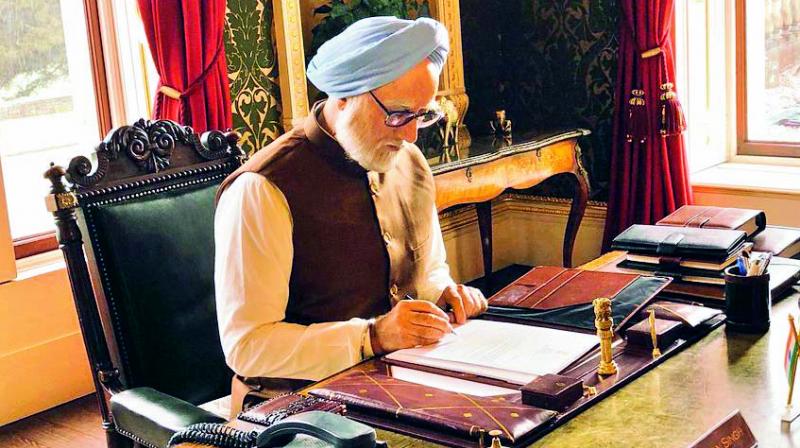 Stills from the movie The Accidental Prime Minister

I watched The Accidental Prime Minister (based on the book written by Sanjaya Baru), and wondered about the timing of the movie’s release date. Nothing is an “accident”, the cynic in me went into overdrive at the preview, arranged by Akshaye Khanna, who plays an over-glamourised version of Mr Baru. The invitees were mainly family and close friends of the late Vinod Khanna, and not the usual Bollywood suspects. It was strictly a “preview” sans paparazzi and photo-ops, sans “preview looks” (aren’t we sick of the tired and self-conscious airport looks?). And yet, from the very first few shots, I felt like I was watching a slick ad film for an imported men’s wear brand. Not only was the narrator (Baru-Akshaye) talking to the camera in a conspiratorial manner, while introducing the ensemble cast one by one, he was changing in and out of sharply cut suits, like he was prepping for a debut on the red carpet at the GQ Awards. I had no idea a job like Mr Baru’s was a vanity assignment with enough kharcha for lime-green shirts worn rakishly with neon ties, combining all those shades with checked burgundy and other coloured tweed jackets. Wow! My entire attention from that point onward was focused on Akshaye’s next wardrobe change — more 2019 than 2004. Why quibble? It was one detail that matched the finesse of the hero of this docu-non-drama — Akshaye Khanna. Err… Yes… Manmohan Singh is also in the movie. A more lifeless performance is yet to be seen! Mind you, not restrained. Lifeless! No wonder Dr Singh is cross.

Here’s the thing about political films based on contemporary history. Everything depends on the perspective. Take “Vice” — the most debated Hollywood film of 2019. People in America have loathed it. Mainly because they loathed Dick Cheney, the protagonist, ably played by Christian Bale, had actively disliked The Iron Lady, in which the brilliant Meryl Streep enacted the role of Britain’s formidable and flawed Prime Minister Margaret Thatcher. I had felt then about Streep’s portrayal, as I do now about Anupam Kher’s — acting ought to transcend mere mimicry. Acting involves interpretation, insights and a heavy investment of emotions. Getting doctorsaab’s gait right is no big deal. Sounding like him — and speaking in a rasping voice requires effort, sure, but not talent.

Coming to the content itself: The narrative is unambiguously biased against the Gandhi family, and poor Manmohan Singh emerges as a bichara, a complete wimp, a weak pawn who meekly goes along with Sonia Gandhi’s imperious diktats, and is forced to face countless humiliations. Mr Baru is projected as the de facto PM who spoonfeeds Manmohan Singh at each point and saves his “honour”, while wanting nothing but the doctorsaab’s love and trust in return. The German actress (Suzanne Bernert) playing Sonia could be any white woman in a wig. In fact, all the many “look-alikes” in the movie, most of whom have no lines, resemble cardboard characters on countless parody shows which regularly send up politicians and do a brilliant job of it (Kunal Vijaykar as Sharad Pawar, being just one example). For someone of my generation, there is a smidgen of amusement — just a little — in identifying familiar faces. But for today’s impatient audience, unaware and ignorant about recent history, none of this matters. They neither know about nor care what happened with the nuclear deal and George W. Bush. Naveen Patnaik being snubbed? Hello? It does not warrant a mention! Leave aside a whole scene.

The movie is so predictably structured, Rahul Gandhi can safely ignore it. So should a sulking Manmohan Singh. There are hardly any revelations or insights which we are not aware of. Machinations and plots are a part and parcel of political life across the world. And yes, everyone knows who was calling the shots during Manmohan Singh’s 10-year tenure. What is not explained (and this was as good a chance as any to do so) was the motivation behind Dr Singh’s decision to hang on and on and on. The film suggests he was ruthlessly used. Which may be true. But it does not decode his reasons for continuing to be Madam’s puppet. The one performance that stands out is Vipin playing the role of Madam’s henchman — Ahmed Patel. In just a few key scenes, he establishes his character convincingly and with the required menace.

Let’s hope a movie like this one, despite its mediocrity, with some dicey dialogues getting blipped out, and the worst background score in recent times, will pave the way for more films based on contemporary politicians. It is Akshaye Khanna’s film all the way — but, naturally! He is in every frame wearing the coolest suits, and doing an easy-breezy job of running the country. That the movie effectively destroys doctorsaab’s image, may have been “accidental”… wait a minute! Maybe not! The film does end on a saffron note — and that’s no accident! I ended up feeling really, really sorry for Manmohan Singh — the reel and real one!