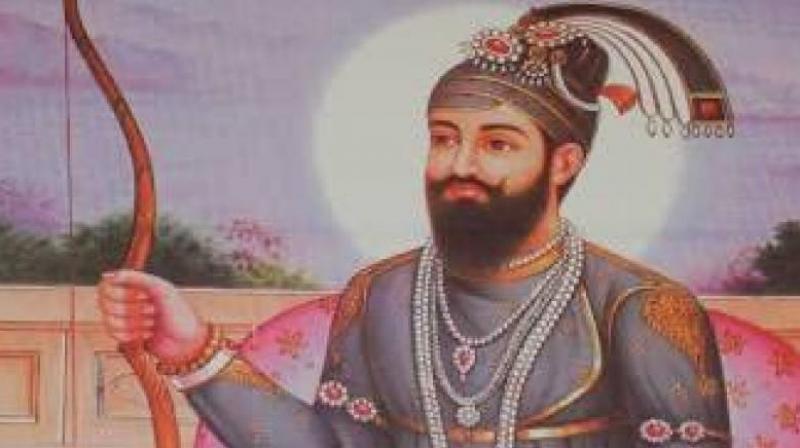 Guru Gobind Singh, “the son of a martyr father and the father of four martyr sons”, was born in 1666 at Patna in Bihar.

Guru Tegh Bahadur, the ninth Sikh Guru, was in deep thoughts — contemplating how to help the Kashmiri Pandits who had approached him to save them from persecution. The faith of the Pandits was in danger. As the Guru was reflecting over what step could be taken, Guru Gobind Singh asked him why he looked so preoccupied. Guru Tegh Bahadur replied that the Kashmiri Pandits could be saved only if a truly worthy person sacrificed his life. Guru Gobind Singh, then only nine years of age, replied, “Father! None could be worthier than yourself to make such a sacrifice”.

Guru Gobind Singh, “the son of a martyr father and the father of four martyr sons”, was born in 1666 at Patna in Bihar. He spent the first six years of his life at Patna where now stands the Takht Patna Sahib. Gobind Singh moved to Anandpur Sahib and received his education in languages, archery, riding and in the practice of arms. He was proficient in Punjabi, Braj, Sanskrit and Persian and had a natural genius for poetic composition. The Jaap Sahib, Akal-Ustat, Shabad-Hazare and Chaupai Sahib are some of his most important banis. The Guru patronised poets, thinkers and scholars as well.

Through his poetry, Guru Gobind Singh preached the worship of one Supreme Being, emphasising love and equality. “Someone is Hindu and someone is Muslim... but all the human beings, as a species, are recognised as one and the same”, says the Guru. This secular and humane approach was demonstrated by the Guru as soon as he was born. According to a legend, Pir Bhikan Shah, a Muslim mystic, guided by a divine light, had approached the child with two bowls of milk, signifying Hinduism and Islam. The child placed his hands on both the bowls indicating that both are equal. Guru Gobind Singh condemned idol-worship, superstitions and useless rituals. He was in favour of strict moral and ethical moral code of conduct. He denounced asceticism and compared a yogi doing penance by standing on the leg to a crane which kept one eye shut off as if in prayer and the other on the lookout for frogs. He also criticised the taboos on food, like vegetarians versus non-vegetarianism. How to practice asceticism then? Guru Gobind Singh says, “Let thine own house be the forest, thy heart the anchorite. Eat little, sleep little. Learn to love, be merciful and forbear. Be mild, be patient. Have neither lust, nor anger. Neither greed nor obstinacy.”

Guru Gobind Singh also composed poetry to put courage into his Sikhs. The old stories were translated to infuse bravery and sword was glorified as bhagauti to secure God’s justice. The sword was never meant as a symbol of aggression but was to be used only in self-defence, as a last resort. In a Persian couplet in Zafarnama, the Guru says, “When all other means have failed, it is but lawful to take to the sword.” No wonder, Guru Gobind Singh, at the age of 33, was ready to establish the Khalsa Panth, a new faith based on equality, bravery and a sense of sacrifice. The Khalsa brotherhood had common unifying symbols like five Kakkars and the ceremony of baptism. The ultimate transformation of the Sikh community was made in the form of declaration of the Guru Granth Sahib as the Eternal Guru of the Sikhs.

The Guru fought a number of battles against the mighty unjust forces. He died a martyr. His father sacrificed his life for the truth. Guru Gobind Singh’s two elder sons, Ajit Singh and Jujhar Singh, attained martyrdom while fighting at Chamkaur. His two younger sons, Zorawar Singh and Fateh Singh were bricked alive at Fatehgarh Sahib. The Guru sacrificed his entire family on the path of righteousness and everything was accepted as His hukam. In the forest of Machhiwara, separation from his sons and Sikhs in the form of death was expressed by the Guru as a separation from the Akal-Purakh. In a moving farewell the Guru writes, “Convey to the Dear One the craving of His devotees for Him. Without Thee the luxury of downy beds is painful like a malady; life in a palace is like dwelling amid serpents; without Thee, pleasant beverages are no better than a sharp poniard. Without Thee these comforts are killing like the butcher’s knife; a pallet of straw is dearer to us, if the Dear One be there; palaces burn us like the infernal fire, if Thou be not with us.”