Tradition: The dead faith of the living

Prime Minister Narendra Modi has shown that he can appropriate other personas, as he has done with Mahatma Gandhi now. 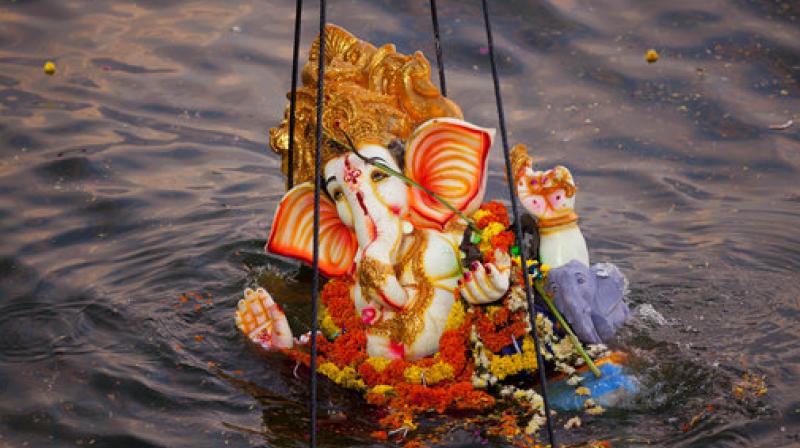 The Ganesh statues in public spaces and the long winding processions to a water body for immersion is a relatively new one. (Photo: AP)

That great Broadway musical Fiddler on the Roof, set in the village of Antevaka in imperial Russia (in today’s Ukraine), starts with the song “Tradition”, which begins with the monologue: “How do we keep our balance? I’ll tell you in one word. Tradition. We have traditions for everything. How to sleep. How to eat. How to work. How to wear clothes. For instance, we always keep our heads covered, and always wear a little prayer shawl. This shows our constant devotion to God”.

The verse goes on quite significantly to remind us: “And because of our traditions, every one of us knows who he is and what God expects him to do”.

It’s true that our many societies and groups devise our identity with rules of conformity and tradition enshrines practices and them. Ask why is Sunday a day of rest and contemplation? Tradition. Why do we offer prayers on Friday? Tradition. Why don’t many eat meat on Tuesday? Tradition. And so the list goes on. But often these traditions are practised quite unthinkingly, and more important, without any relevance to the times we live in and how they impact on our lives. Truly, as in the words of Jaroslav Pelikan, Professor of Religion at Yale: “Tradition is the living faith of the dead, traditionalism is the dead faith of the living”.

Some traditions are old, but many more are relatively new. The Ganesh statues in public spaces and the long winding processions to a water body for immersion is a relatively new one. Though Ganesh has been worshipped from times immemorial, the public celebrations of a festival began around 1893, during the nascent stages of Indian nationalism, that Lokmanya Bal Gangadhar Tilak began to organise the Ganesh Utsav as a social and religious function for Hindus to publicly celebrate. He was the first to put in large public images of Ganesha in pavilions and establish the tradition of their immersion on the tenth day. This recent tradition has become an environmental nightmare, with the indiscriminate use of plaster of paris and chemical paints poisoning our waters. The cost and efforts of clearing the organic and other debris is now monumental. The injunction against adult women entering the Ayyappan Temple at Sabarimalai is an even more recent one.

Now we are soon going to observe other traditions. On Dussehra and Diwali. Dussehra in particular will be celebrated by Hindus with orgiastic frenzy, slaughtering hapless animals to propitiate the gods, as Muslims did on Bakr-Id on August 21. Even Indian Army units observe this with the ritual slaughter of buffaloes. In Nepal, it’s a literal bloodbath with thousands of buffaloes butchered in public as a display of faith and piety. When I commented on this elsewhere, I got many messages to suggest that my comment about banning animal sacrifices to observe rituals did not go down well with some people. Some said it amounted to interference with religion and tradition. Others said it was as much a cultural practice as it was a sacred ritual. Now we are getting the same comments over the Supreme Court’s ruling opening up the Ayyappan temple at Sabarimalai to women, or on outlawing triple talaq.

This reverence for the traditional practice argument reminds me of what Lord William Bentinck, then Viceroy of India, said in 1826 about sati. When some Hindu bhadralok protested to him that it was a traditional practice, he just said: “In my country we have a tradition too. When a person kills or forces someone to die, we just say hang the blighter!” My custom is better than yours. According to an 1829 report, statistics for the period 1815-1824 yields a total of 5,997 instances of sati for the Bengal presidency alone — an average of 600 per year.

When British rule extended to virtually all parts of the country by 1842, Sir Charles Napier, commander-in-chief, replied to protests saying: “Be it so. This burning of widows is your custom; prepare the funeral pile. But my nation has also a custom. When men burn women alive, we hang them, and confiscate all their property. My carpenters shall therefore erect gibbets on which to hang all concerned when the widow is consumed. Let us all act according to national customs.” This is despite it being endorsed by a sacred text. In the Rig Veda it is written: “Rise, come unto the world of life, O woman — come, he is lifeless by whose side thou liest. Wifehood with this thy husband was thy portion, who took thy hand and wooed thee as a lover.” (RV 10.18.8)

The tradition of sacrifice for the Muslim festival, quite ironical now given the palpable animosity between the Muslim and Jewish communities, has a Jewish origin. According to the fable, God tells Abraham: “Take your son, your only son, Isaac, whom you love, and go to the region of Moriah. Sacrifice him there as a burnt offering on one of the mountains I will tell you about.”

Abraham took Isaac, two servants and a donkey and set off on the 50-mile journey. When they arrived, Abraham ordered the servants to wait with the donkey while he and Isaac went up the mountain. He told the men: “We will worship, and then we will come back to you.” (Genesis 22:5b, NIV)

Isaac asked his father where the lamb was for the sacrifice, and Abraham answered that the Lord would provide the lamb. Saddened and confused, Abraham bound Isaac with ropes and placed him on the stone altar.

Just as Abraham raised the knife to slay his son, the angel of the Lord called out to Abraham to stop and not harm the boy. The angel said he knew that Abraham feared the Lord because he had not withheld his only son. When Abraham looked up, he saw a ram caught in a thicket by its horns.

In the derivative Islamic tradition, one of the main trials of Abraham’s life was to face the command of God to sacrifice his dearest possession, his only son. Upon hearing this command, he prepared to submit to God’s will. During this preparation, Satan (Shaitan) tempted Abraham and his family by trying to dissuade them from carrying out God’s commandment, and Ibrahim drove Satan away by throwing pebbles at him. In commemoration of their rejection of Satan, stones are thrown at symbolic pillars signifying Satan during the Haj rites.

Abraham presented the matter to his son and asked for his opinion about the dreams of slaughtering him. Ishmael did not show any hesitation or reservation even for a moment. He said: “Father, do what you have been commanded. You will find me, Insha’Allah (God willing), to be very patient.” When Abraham attempted to cut Ishmael’s throat, he was astonished to see that Ishmael was unharmed and instead, he found a dead ram that was slaughtered. Abraham had passed the test by his willingness to carry out God’s command. Poor rams are still slaughtered in tens of thousands never knowing the reason why?

This has been going on for many thousand years now. One would think that by now God would be quite convinced of the faithful’s faith in him by their willingness to sacrifice animals. The gods of Hindus and Muslims have been propitiated enough now with blood offerings of animals who are slaughtered in vast numbers never knowing the reason why. It’s time now that we gave religion back its humanity by stopping animal sacrifice as a religious ritual.

Prime Minister Narendra Modi has shown that he can appropriate other personas, as he has done with Mahatma Gandhi now. That is good.

Now is the time for him to become the Raja Rammohun Roy of our times, by beginning the full reform of the Hindu samaj, its laws and practices. But as Mark Twain wrote: “The less there is to justify a traditional custom, the harder it is to get rid of it.”