Our defence budget is far too low, we need to compensate urgently

The much vaunted “Make in India” has not taken off, while FDI in the military-industrial complex has been almost zero. 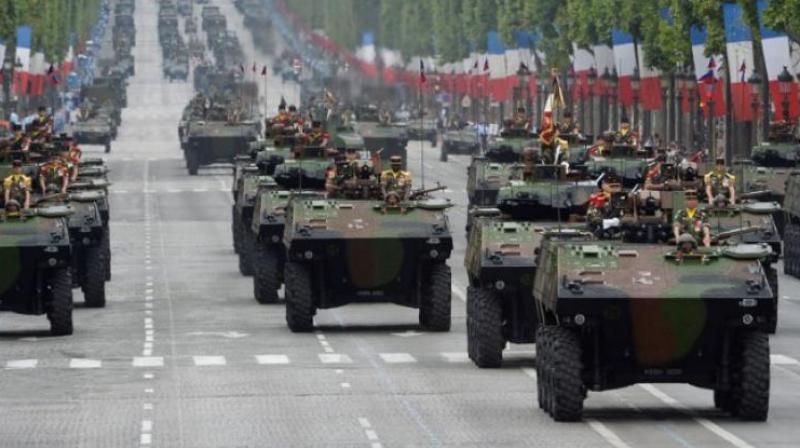 The Indian soldier, as always, will fight the enemy to the death to defend India’s territorial integrity, even when using totally obsolete weapons, but raw courage alone or only diplomacy cannot deter or defeat a ruthless enemy, as the disastrous 1962 India-China war showed. (Photo: Representational Image/AFP)

In 2018, India has an “effective or real” defence budget of about $44 billion which, at 1.49 per cent of GDP, is the second lowest since 1950. Another $18 billion is spent on pensions under the heads of “MoD Misc” (Rs 16,206 crores) and “defence pensions” (Rs 1,08,853 crores). By comparison, the Russian defence budget for 2018 is $46 billion (2.8 per cent of GDP), while the Americans and Chinese have allocated $750 billion and $175 billion respectively. Can India emulate some aspects of the “Russian model” as today Russia has the capability to deter both the US and China due to its technologically advanced and innovative nuclear arsenal with associated delivery systems.

Few people are aware that India built up a formidable defence capability between 1962 and 1991 despite a low defence budget because we got a large amount of diverse weapons for the armed forces at “friendship prices” with repayment spread over 18 years at two per cent simple interest, courtesy the erstwhile USSR (Pakistan is getting something similar from China now). This, along with a powerful and decisive Prime Minister Indira Gandhi, resulted in India’s greatest-ever military victory in the 1971 war, which led to the creation of Bangladesh. Post-1971, the Indian politico-bureaucratic leadership decided to sideline the military and keep the three service chiefs out of military decision-making while successive Pay Commissions reduced the pay and parity of the military vis-à-vis the civil bureaucracy. The decline really set in with the collapse of the USSR in 1991 and matters further deteriorated with nuclear parity between India and Pakistan after the 1998 nuclear tests, and China’s phenomenal economic-cum-military rise, its supply of conventional and nuclear delivery capabilities to Pakistan along with the well-known presence of Chinese Navy warships, submarines and new bases in the Indian Ocean.

India is upset over the growing Chinese influence in the Maldives and is expecting “a hot summer” when the snow melts along the disputed India-China border post the Doklam standoff of 2017. Growing Chinese military infrastructure (roads, 14 airfields in Tibet, military reorganisation, a defence budget of $175 billion, etc) and new missile tests by Pakistan Navy of “Chinese copies” have created some justified unease among the strategic community despite statements that “India is ready to fight a two-front war” while its Army is importing basic infantry weapons like rifles, carbines and light machine-guns and its Air Force is facing drastic shortages in combat jets. Even the Navy, which has prided itself in designing and building ships and submarines for over 50 years, is facing a “funds crunch” with well-known shortages in submarines, mine counter-measure vessels, ship-borne helicopters and amphibious warfare capability.

In the meantime, Russia, with a landmass about five times larger than India, and a declining population of 150 million, has managed to hold its own against the United States. In 2009, during a submarine seminar in the US, where I spoke, I recall a US admiral saying that despite the breakup of the USSR, its successor state Russia was still the only nation capable of destroying the US in a single day due to its nuclear arsenal. Today, an impoverished North Korea, having tested a 11,000-km range nuclear-tipped ICBM which can reach the US mainland, has found itself in a position to plan a Kim-Trump summit meeting.

Media reports indicate that Russia under President Vladimir Putin has developed new long-range ballistic missiles with multiple re-entry vehicles (nuclear-tipped MIRVs), which can reach any target on earth and cannot be intercepted by existing ballistic missile defence systems (BMDS’). To this arsenal, the Russians have added a long-range hypersonic nuclear-tipped cruise missile system, propelled by a miniature nuclear engine, and also a new long-range underwater high-speed nuclear-tipped drone, which when launched from a submarine can destroy large coastal cities. And knowing how the Russians defeated Napoleon in the early 19th century and Hitler in the mid-20th century, neither the US nor China has any doubts about Russia’s political will to respond to any threat. In addition, Russian scientists, unlike our DRDO, have produced a new generation of stealth combat jets (SU-57), strategic nuclear submarines (SSBNs) and tactical nuclear submarines (SSNs). Given its poor economic state, Russia cannot be termed a global superpower, but it cannot be ignored or threatened.

The Indian soldier, as always, will fight the enemy to the death to defend India’s territorial integrity, even when using totally obsolete weapons, but raw courage alone or only diplomacy cannot deter or defeat a ruthless enemy, as the disastrous 1962 India-China war showed. Political vision, leadership, resolve, along with a scientific-industrial base and a relevant higher defence management organisation are essential. Sadly, India is lacking in all these.

What then can India do, given that a “localised” border conflict (Doklam repeated along multiple points of the disputed LAC) or even a clash at sea (in case India ever decides to “intervene” in the Maldives) cannot be ruled out? Appeasing China will only embolden it further to keep testing Indian resolve and is not recommended, but needless provocation can be avoided. The obvious answer is an increase of the defence budget to 2.5 per cent of our GDP, but this is highly unlikely given the glacial pace of military modernisation and our ostrich-like attitude to growing threats from China, Pakistan and terror. Reorganisation of the higher decision-making system is unlikely given that little has happened since 2014 and new elections are due in 2019. The much vaunted “Make in India” has not taken off, while FDI in the military-industrial complex has been almost zero. Getting into military alliances is ruled out, though some form of intelligence-sharing with like-minded nations is feasible, especially in the maritime domain, and should be done.

Prime Minister Narendra Modi has very little time before the nation swings into “general election mode”. The only possible options available to India could include a “tweak” of its No First Use (NFU) nuclear doctrine, which needs to actually deter any misadventure by two nuclear-armed neighbours, by introducing ambiguity that nuclear weapons maybe used by India in rare cases if some “red lines” are crossed.

Since the DRDO can’t be expected to emulate the latest Russian technological advances in missiles, we can at least ramp up domestic production of our Agni ICBMs and nuclear submarines. Having joined the MTCR, India could get some cruise missiles from Russia. Also, hopefully, before the next general election is announced, the government (always busy with numerous state elections) makes available the minimum additional funds to make up for the well-known critical shortages of conventional operations in the three services. This process will take over a decade, if unspent funds are not allowed to lapse annually, and may require the defence budget to increase to at least two per cent of GDP. Finally, there is no alternative to “Make in India” pioneered by the Indian Navy, which should be provided to continue with its path to become a “builders navy”.