For instance, say you are in IKEA to pick up a double bed and a matching mattress. 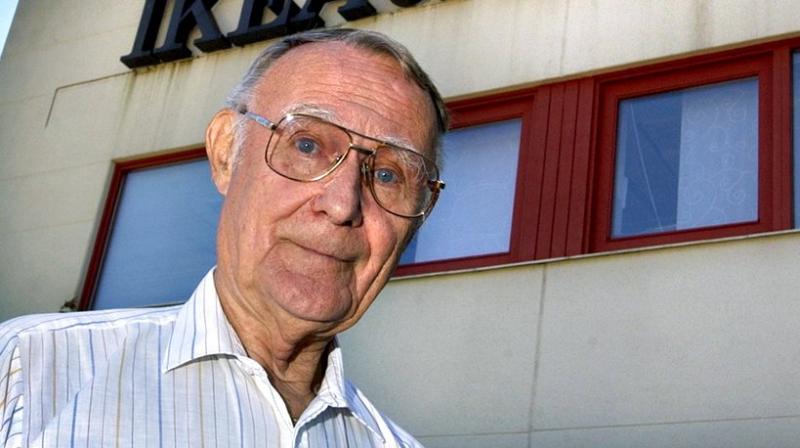 “Time is a human illusion
We think all things must pass
Lives, loves and their fusion
Our bounded fate, Alas!
God has no time for Time
No ages or yugs unfold
And quite beyond the sublime
God never grows old.”

Ingvar Kamprad dies aged over 90. You may be forgiven for not knowing who he was. I didn't either but was told this week that he was the man who invented the world-wide empire of flat-pack furniture called IKEA.

I say, “world-wide” without having encountered IKEA salesrooms in Mumbai, Delhi or any other city of India. Perhaps in a country of mistris, carpenters who come to you, flat-pack furniture is a luxury one needn't afford. Nevertheless, some readers, who’ve bought flats or houses in Europe or the US and whose foreign dollar reserves, black or white, don’t stretch to furniture from antique warehouses, might have been through the IKEA experience.

Note the word. Shopping at IKEA is like no other activity. Determining to do it is like planning an expedition and giving your days to it.

This experience is for a particular class of people. There was, in Margaret Thatcher’s Cabinet, a minister whose wife referred to another minister’s family as “the sort of people who have to buy their own furniture” — meaning they didn’t inherit it from their Tudor ancestors. And then there’s the contender for the leadership of the present Tory Party, Jacob Rees-Mogg who was asked if he had ever been to IKEA and said he hadn’t and never intended to go.

Me? I'm not snobbish. I have in the house one old very faded Persian carpet which belonged to my father and also several IKEA bookshelves.

Conveniently for the plebeians, the IKEA warehouse/outlets are set on the fringes of towns. The one I frequent used to be a dark satanic mill in deepest South London. The mill’s chimneys, visible for miles around, are painted with the IKEA colours and logo and are to the home-furnishings-buyer what the masts of a ship on the horizon would have been to the shipwrecked sailor on the tiny island in a turbulent sea. Or, maybe not.

As in no other retail outlet in the world, IKEA’s showroom has a path marked with arrows to guide buyers through the entire display. There is no deviating from this chartered path. It winds its way through all the sections of the warehouse and if you turn away from it and try a short cut to the section which displays what you want to buy, you inevitably get lost.

For instance, say you are in IKEA to pick up a double bed and a matching mattress. You have to pass through the section with displays of twenty different kitchen designs, then the bathrooms, the office furnishings, dining room furniture, garden stuff, wall-paper selection, sitting room sofas and finally perhaps, still only a quarter of the way through your expedition, to the bedroom accoutrements.

You choose the one you want and note the serial number of the particular item or items displayed on an attached card. The card tells you the number of an aisle and the letter of the booth within that aisle in which your item is stocked. Having noted this you then continue your journey through the sections which attempt to tempt you to buy crockery, cutlery, curtains, stationery, vases, wall-clocks and finally you pass through the crucifix, guillotine, electric chair and gas-chamber — OK, I made that one up! You get my drift.

To your relief you have come to the end and are released. You have almost certainly been lost and, winding your way hither and thither till you get to a section you’ve passed before, you resolve to stick to the designated path and follow the arrows.

Finally you get to the warehouse.

This is on the ground floor and has rows and rows of lettered and numbered industrial-height metal frames in which are stored the thousands of cardboard-packed items. The aisles are marked A1 to A99 and then maybe through the alphabet to Z1 and Z whatever.

Ah! So you’ve forgotten the aisle number? Back to the maze Theseus! And this time write the number of the aisle and section down on your forearm. An hour later, back in the warehouse you locate the section where your bed is lodged. It doesn’t look like a bed. It looks like a long cardboard box which you, if you can handle the weight, unload and stack on your trolley. The same with the mattress which is not, thankfully flat-packed but does resemble a mattress. You wheel your trolley to the battle-lines of the check out, pay and take your trolley to the loading bay to which the cars can come or of course to the car park only to find that your car is too small to accommodate the mattress and the cardboard box with the bed sticks three feet out of the back window.

This is only the beginning of your adventure. Getting the stuff home and unloading it is phase two and then the fun begins.

You unwrap the cardboard and find flat bits of wood or chip-board and spars, several hundred metal fittings and screws and an instruction booklet on how to put the thing together. It's not in words but in forty diagrams.

Two days later, resolved never to be defeated by a mere flat-pack, having screwed and unscrewed the constituents a few times —  Voila! — you have a perfectly formed bed of your dreams with the head-board somehow attached to the side. But what the hell, it'll stop you falling off!

Perhaps as some wise Englishman said, good books are the only good furniture.