As adivasis ignored, rage is brewing

Tribal people account for 8.2 per cent of India’s population. 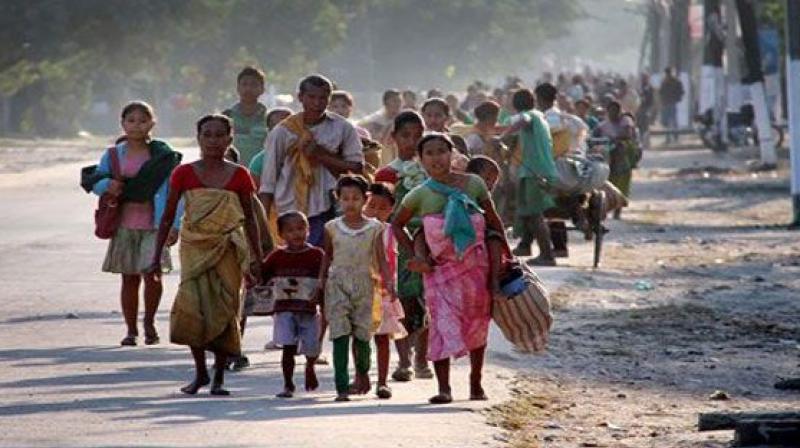 What little the Indian State apportions to the welfare and development of indigenous people gets absorbed in the porous layers of our public administration.

The adivasi homelands are restive. From Palamau to Adilabad a new consciousness is making India’s original people ask questions. How long will adivasis not only be denied what is their due, but exploitation by outsiders who not only oppress them but also ostracise them continue?

Tribal people account for 8.2 per cent of India’s population. They are spread over all states and Union territories. They can be broadly classified into three groups. The first comprises those who predate the Indo-Aryan migrations — who are termed by many anthropologists as Austro-Asiatic-speaking Australoid people (including Central India adivasis). The other two major groups are the Caucasoid tribes who migrated into northwestern India, and the Sino-Tibetan or Mongoloid tribal people of the Himalayan and northeastern regions who migrated more recently.

Article 366 (25) of the Constitution defines Scheduled Tribes as “such tribes or tribal communities or part of or groups within such tribes or tribal communities as are deemed under Article 342 to be Scheduled Tribes (STs) for the purposes of this Constitution”. The criteria for classification being geographical isolation, backwardness and having distinctive culture, language, religion and “shyness of contact”.

There are some 573 communities recognised by the government as STs, and therefore eligible to receive special benefits and to compete for reserved seats in legislatures, government jobs and educational institutions. The biggest tribal group, Gonds, number about 16 million, and are spread out in Maharashtra, Madhya Pradesh, Telangana, Chhattisgarh and Odisha, closely followed by Santhals, with about 14 million. Central India is home to the country’s largest adivasi tribes, and, taken as a whole, roughly 75 per cent of the India’s tribal population lives here.

The term adivasi carries the specific meaning of being the original inhabitants of a given region and was specifically coined for that purpose in the 1930s. Clearly, all Scheduled Tribes are not adivasis. Unlike adivasis, the other two broad tribal groups have fared better in post-Independent India. Within them some, like the Meenas and Gujjars of Rajasthan, Lambadas of Maharashtra and Telangana, and Khasis, Mizos, Angami and Tangkhul Nagas, and the Meitei in the Northeast have done exceptionally well. Unlike the Northeast tribes, the Meenas and Gujjars don’t even meet the stipulated criteria of geographical isolation, backwardness, distinctive culture, language and religion. Forget “shyness of contact”!

We all now know that big government, in the absence of a responsive nervous system, actually means little government, and whatever little interaction the people at the bottom have with the State is usually none too happy. In the vast Central India highlands, the occasional visit of an official invariably means extraction by coercion of what little the poor people have. It doesn’t just end with a chicken, goat or a bottle of mahua, it often includes all these and the modesty of the womenfolk.

Most tribal villages and settlements have no access to schools and medical care. Very few have all-weather road access. Perish the thought of electricity though all the coal and most of the hydel projects to generate electricity are in the tribal areas. The forests have been pillaged and virgin forests thick with giant teak and sal trees are things of the past.

In mineral-rich Odisha, over 72 per cent of all adivasis live well below the poverty line. At the national level, 45.86 per cent of adivasis live below the poverty line. Incidentally, the official Indian poverty line is nothing more than a starvation line, which means that almost half of India’s original inhabitants go to bed every night starving. Several anthropometric studies have revealed that successive generations of adivasis are actually becoming smaller unlike all other people in India, who benefit from better and increasingly nutritious diets.

What little the Indian State apportions to the welfare and development of indigenous people gets absorbed in the porous layers of our public administration. Out of the 3,480 IAS cadre strength, STs account for about 240, but there isn’t a single IAS officer who belongs to the largest adivasi group, the Gonds. The next biggest group, Santhals, fare somewhat better because of the recognition of Santhali as an official language, enabling them to take the civil service entry exams in their language. Despite this, tribals from Rajasthan — mostly the Indo-Aryan Meena grouping — corner the overwhelming majority of places in the All India Civil Services, and the mission-educated northeastern tribals such as the Khasis, Nagas and Mizos the remainder.

Quite understandably, there is a raging fire of discontent and anger in these adivasi homelands. The State’s response is to treat it as a law and order issue and quell the discontent by force, without trying to address it.

In recent years there has been a sudden concern for adivasis. It is as much driven by the expansion of Naxalite influence in the adivasi homelands, as it is by fears of conversion to Christianity that would precluded their assimilation into the Hindu Samaj.

The first NDA’s feigned concern for adivasis caused the states of Chhattisgarh and Jharkhand to be carved out of Bihar and Madhya Pradesh respectively, but without the real tribal issues relating to their culture, way of life and aspirations being addressed. Political power has still, by and large, eluded them. Even when tribal leaders come to the fore, they are quickly sucked into the ways of the traditional ruling classes and prove no less avaricious and corrupt.

Even if the provisions of the Constitution were implemented in some measure, if not all of its word and spirit, the present situation would not have come to be. The Fifth and Sixth Schedules under Article 244 of the Constitution in 1950 provided for self-governance in specified tribal-majority areas. This did not happen. The migrations reduced the number of adivasi-majority areas. There are still some solutions possible within the Indian Constitution and in the universal principles of justice and equality. There are 332 tribal-majority tehsils in India, of which 110 are in the Northeast, where they have won states of their own.

This leaves 222 tehsils encompassing an adivasi population of over 20 million. These tehsils, many of them contiguous, must be immediately made self-governing areas, as envisaged by the Constitution. All these tribal majority areas can be consolidated into administrative divisions whose authority must be vested with a democratically-chosen leadership.

Instead of the state capital-controlled government, the instruments of public administration dealing with education, health, irrigation, roads and land records must be handed over to local government structures. The police should also be made answerable to local elected officials and not be a law unto themselves.

The lament of the adivasi about their role in their government is well known. It is the subject of many folk songs. A popular Gond song goes: “And the Gods were greatly troubled/ in their heavenly courts and councils/ Sat no Gods of Gonds among them. / Gods of other nations sat there/ Eighteen threshing-floors of Brahmins/ Sixteen scores of Telinganas/ But no Gods of Gonds appeared there/ From the glens of Seven Mountains/ From the twelve hills of the valleys.”